Eriksen's teammates to 'play for Christian' at Euro 2020 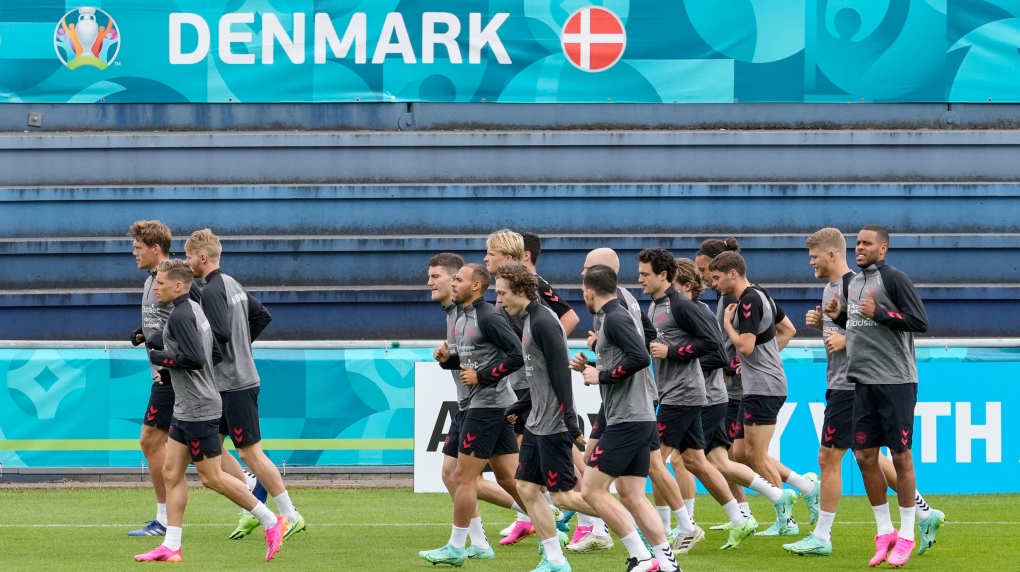 Players exercise at the training ground during a training session of Denmark's national team in Helsingor, Denmark, Monday, June 14, 2021. It is the first training of the Danish team since the Euro championship soccer match against Finland when Christian Eriksen collapsed last Saturday. (AP Photo/Martin Meissner)

COPENHAGEN -- Christian Eriksen had a simple message for his Denmark teammates when he spoke to them from the hospital for the first time following his collapse at the European Championship.

"He told us to look forward, and to look forward to the game on Thursday," Pierre-Emile Hojbjerg said Monday. "That meant a lot. ... It gave me a form of energy."

Hojbjerg was one of three Denmark players -- along with goalkeeper Kasper Schmeichel and forward Martin Braithwaite -- to talk to the media about Eriksen's collapse.

The 29-year-old Eriksen suffered cardiac arrest during Saturday's game against Finland and had to be resuscitated with a defibrillator. The Inter Milan midfielder remained in a Copenhagen hospital on Monday in stable condition.

Eriksen spoke to his teammates via video link on Sunday, which all three of his teammates said was an important boost as they try to re-focus on the Euro 2020 tournament. Denmark plays Belgium in Group B on Thursday after losing to Finland 1-0.

"It gives you the feeling that it's OK to move forward," Hojbjerg said. "We really want to play on Thursday, to play for Christian and to play for everyone who has supported us."

The team trained on Monday after the players were given Sunday off to process the incident.

The Danish players have been widely praised at home for forming a circle around Eriksen to shield him from public view as the medical staff gave him CPR. Denmark's team doctor said Sunday that Eriksen "was gone" before being resuscitated.

Braithwaite could be seen praying as he stood in the circle around Eriksen and fought back tears Monday when asked about that moment.

"I tried doing the only thing I could to help him at that moment," Braithwaite said.

Hojbjerg recounted the initial confusion when he first saw Eriksen on the ground.

"I turned around and I saw Christian lying there. I could see the whites of his eyes," Hojbjerg said. "Then I saw more and more medical staff rushing toward Christian and I saw Simon (Kjaer) waving his arms."

Schmeichel, who is close friends with Eriksen and his family, said he had been able to visit the midfielder in the hospital as well.

"That's helped me a lot," the goalkeeper said. "To see that he's OK after he was lying there like that. We talked about everything and nothing. That he's doing well, that's the most important."

Eriksen's agent, Martin Schoots, was quoted in Italian newspaper Gazzetta dello Sport saying the player has been moved by the flood of support and messages he has received from around the world. Schoots said he also spoke to Eriksen on Sunday.

"He was joking, he was in a good mood," Schoots was quoted as saying. "We all want to understand what happened to him, he also wants that. The doctors are doing in-depth tests. Christian won't give up. He and his family really want to express their thanks to everyone."

Schmeichel also praised the team's medical staff as "heroes" for bringing Eriksen back after his heart stopped.

"We are professional football players who dedicate our lives to playing football. These people dedicate their lives to saving lives," Schmeichel said. "To be able to keep their heads calm under such circumstances and bring him back, that's a miracle."

Eriksen's collapse has cast a pall on the entire mood surrounding Euro 2020 in Denmark, which is hosting major tournament games for the first time. But Braithwaite said Eriksen's continued recovery means he is expecting a jubilant atmosphere at Parken Stadium when the team plays Belgium.

"I have no doubt that we'll see something special at Parken on Thursday," Braithwaite said. "Not just from the players but from the entire crowd. That's something I look forward to. And I'm sure I will use it as motivation to go out and play for Christian."