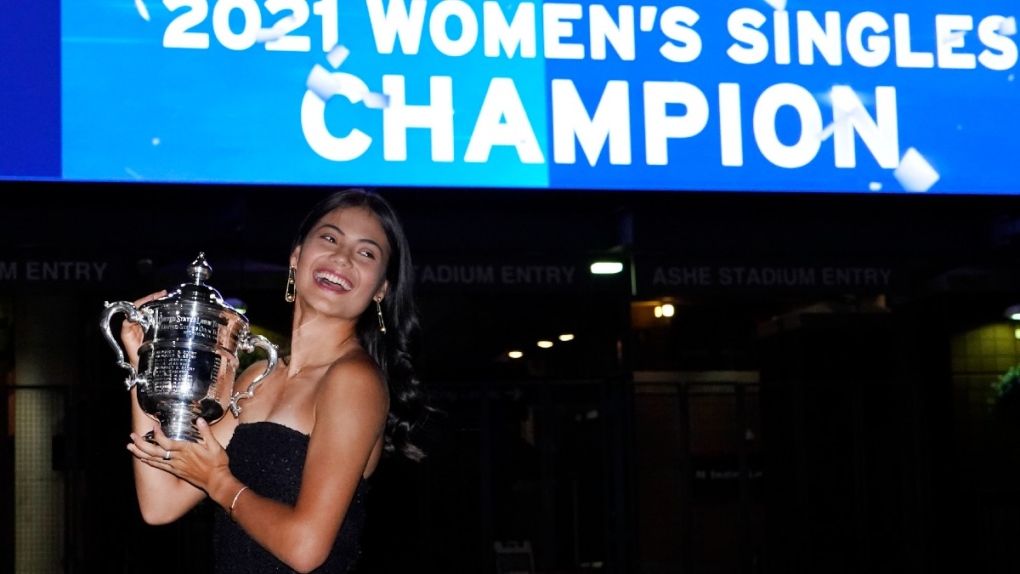 Emma Raducanu poses outside Arthur Ashe Stadium with the championship trophy after she defeated Leylah Fernandez at the US Open tennis championships, on Sept. 11, 2021. (Elise Amendola / AP)

She's been on American talk shows, attended the Met Gala, ticked off a "bucket list" item by visiting the New York Stock Exchange, and chatted to Formula One champion Lewis Hamilton -- a major deal for a big motorsports fan.

As for top soccer coach Jurgen Klopp, who manages Premier League team Liverpool, he has described her as the "talent of the century."

Emma Raducanu's life has been turned upside down since winning the U.S. Open title as an 18-year-old qualifier and, nearly a week later, she's still struggling to get to grips with what has happened.

"Sometimes," she said Friday, "I just have random bursts where I think, `Oh my God, I just won the U.S. Open,' and then I go about as normal as if nothing has happened."

Watching the final for the first time on Thursday -- the day she returned to Britain after a whirlwind few days in New York -- and trying to relive a few of the moments from her 6-4, 6-3 win over Canadian opponent Leylah Fernandez made it all sink in a bit more.

"When I was watching it, it almost feels like that that's not me who is playing, who is pulling off some of those shots," she told the BBC.

Her win on Saturday turned her into a superstar overnight, putting her in demand in the United States.

Everyone wanted a piece of her, with Chanel inviting her to the Met Gala, where she joined a throbbing crowd of celebrities and fashion designers in New York. That was her highlight of the past few days, especially since she met Hamilton there.

"He is such a great inspiration," she said.

The same can now be said of the down-to-earth Raducanu, who had taken 18 months off from tennis to finish her high school education because her parents wanted her to have something to fall back on. One of the subjects she studied was economics and her parents work in finance, explaining why the trip to the NYSE meant so much.

The message she wants to get across is: Dream big and work hard, no matter what your background is.

"Even if it's not tennis, even if it's other dreams like in school and being a doctor or anything like that -- dream big and anything can happen," she told Sky Sports. "And for tennis, I just want to get across you can be a normal kid, go to school, have all the normal things and still achieve results."

Raducanu, who has also spoken to British Prime Minister Boris Johnson over the phone, said she slept almost the entire day after getting back home to England and that she wanted to switch off after a grueling two months. That included a three-week U.S. Open campaign -- a week of qualifying and then a main-draw run in which she didn't drop a set to become the first player to win a Grand Slam as a qualifier and the youngest major winner since 2004.

So, when will the world next see Raducanu on a tennis court? She doesn't really know yet -- her jump of 127 spots to No. 23 in the rankings means she has to revisit her schedule -- but she is targeting an appearance at the tournament in Indian Wells from Oct. 6-17.