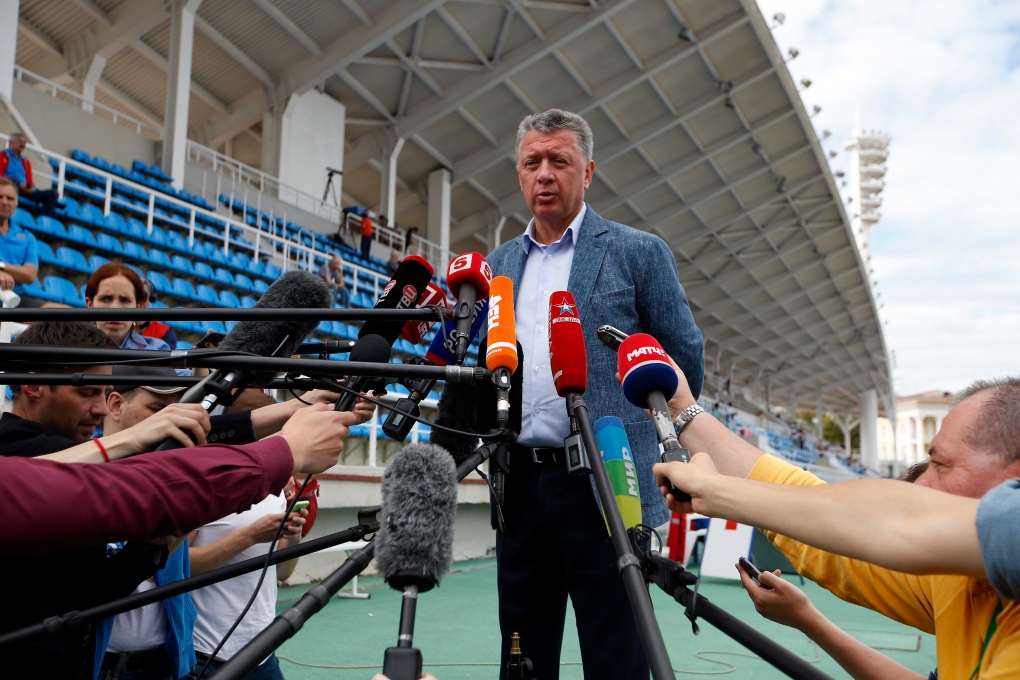 Dmitry Shlyakhtin, head of the Russian track and field federation, speaks to journalists prior to the Russian Athletics Cup, in Zhukovsky, outside Moscow, Russia, Thursday, July 21, 2016. (AP Photo/Alexander Zemlianichenko)

MOSCOW -- The president of the Russian track and field federation resigned on Saturday, two days after he was accused of obstructing an anti-doping investigation involving fake medical documents.

Eight months before the Olympics in Tokyo, Russia is facing a double threat on doping-linked charges, including another case centred on alleged tampering with lab data provided to the World Anti-Doping Agency.

Track federation president Dmitry Shlyakhtin stepped down at an emergency federation conference in Moscow. He was already provisionally suspended pending a hearing on the charges from the Athletics Integrity Unit (AIU).

"Tarasenko is Shlyakhtin's stooge and should get out of the federation immediately, following her super-professional boss," Lasitskene told state news agency Tass.

Lasitskene sarcastically congratulated the board members who voted in Tarasenko. "Well done, the operation to liquidate Russian athletics is nearly complete," she said.

WADA said Friday a key panel had recommended the country be declared non-compliant for allegedly tampering with lab data in a separate case.

That could lead to Russia being banned from the 2020 Olympics in Tokyo. Russia's track team was reduced to a single athlete in 2016 amid earlier doping revelations.

Russia's head track coach Yuri Borzakovsky indicated one path could be for Russia to compete at the Olympics as an officially neutral team, as it did at the 2018 Winter Olympics.

"The main task is that the athletes and their coaches don't suffer in the current situation, so that the guys can keep training for the Olympics and compete there," he said. "In what status they compete, that's another question."

Nearly four years later, the suspension is still in place. World Athletics, formerly known as the IAAF, said Friday that Russia could be expelled altogether following the new charges against Shlyakhtin and senior officials.

Shlyakhtin is one of seven people charged Thursday following an investigation into the medical files presented as an alibi by high jumper Danil Lysenko last year. He was facing a ban for failing to make himself available for drug testing.

AIU investigators allege officials helped Lysenko draw up the fake documents so he could avoid punishment.

World Athletics could also end a scheme which allows top Russian athletes such as Lasitskene to compete internationally as neutrals.

World Athletics' "statements are beyond comprehension," Tarasenko said. She didn't elaborate on how, or if, the federation intended to fight the charges.

"We're not feeling very joyful, put it that way," said Tarasenko, who was a sprinter in the 1990s and is now CEO of a company laying running tracks at stadiums. "We think there's still some chance to keep fighting for the federation."