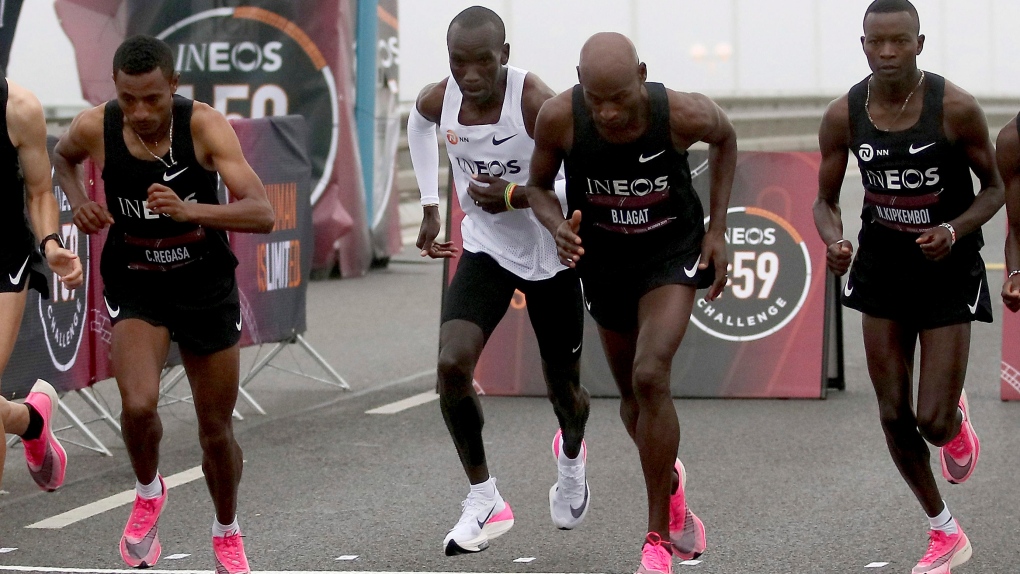 Nike's Air Zoom Alphafly NEXT, a version of the prototype Kipchoge wore when he ran a marathon in 1:59:40 in Vienna last October, is said to provide a 4 per cent boost in running economy -- the amount of work a runner must do at a given speed -- compared with other top racing shoes.

Kichoge's Vienna run received backing from petrochemical company Ineos in an attempt called the 1:59 Challenge, though the milestone didn't count as a world record.

During the race, Kipchoge followed behind a car -- a condition not allowed under IAAF sanctions -- and was assisted by an army of 30 pacemakers.

Some critics have argued that the advancement in technology is akin to doping, though Kipchoge defended the shoe ahead of Sunday's race.

"We live in the 21st century and we need to accept change," Kipchoge told reporters. "Secondly, development goes hand-in-hand with technology. The shoe is good. We are doing a press conference virtually, is that not technology? We should accept technology and marry technology.

"It's good for Nike. On the other hand, it's business. It's good for Nike to be far higher than other companies as far as technology is concerned," he responded when asked if it provided an unfair advantage over other athletes.

Nike was not immediately available for comment, but on its website the apparel manufacturer describes Kipchoge's time of 1:59:40 in Vienna as an "extraordinary achievement: that was "years in the making."

"Our premier racing shoe is loaded with new technology and innovation that includes two ultra-responsive Zoom Air pods in the forefoot and additional ZoomX foam in the heel."

Long distance times have tumbled since Nike's Vaporfly range was introduced in 2016, including Brigid Kosgei's 2:14:04 marathon in Chicago last year, knocking over a minute off Paula Radcliffe's previous record that had stood for 16 years.

Following a review of leading running shoes earlier this year, World Athletics approved Nike's Vaporfly range, but banned any shoes with soles thicker than 40mm or with more than one plate to enhance their spring.

From April 30, it also banned from competition any shoes that have not been on public sale for four months. The new rules meant the latest Alphafly shoes -- which are believed to have a sole that is 39.5mm thick -- are passable.

However, not all of Nike's elite sponsored athletes are fans of the Alphafly shoe. Ethiopian Kenenisa Bekele, who is widely seen as Kipchoge's chief rival in the London marathon, told reporters he had suffered a series of niggling injuries and will instead be using an older version this weekend.

"It's really difficult to adapt to these shoes, especially with speed workouts," said the 38-year-old Bekele, in quotes carried by the Guardian.

"Several times I had some minor injuries, like a muscle stretch, because the shoe is not stable underfoot. It's really unshaped, it's really soft. The muscle needs to adjust to the movement under it. It's really difficult. Not anybody can use the shoe."

However, both Kipchoge and Bekele said their training regimes had been impacted by the coronavirus pandemic.

"It was hard to get fit and up to a high level of training. But lately we have consolidated a bigger team around me and training has been good."

Bekele added: "My preparation was good but because of COVID-19 sometimes it waS not as perfect as I had planned.

"It has been really difficult in Africa so it affected us a lot. We tried our best to prepare well and more or less I have prepared well."