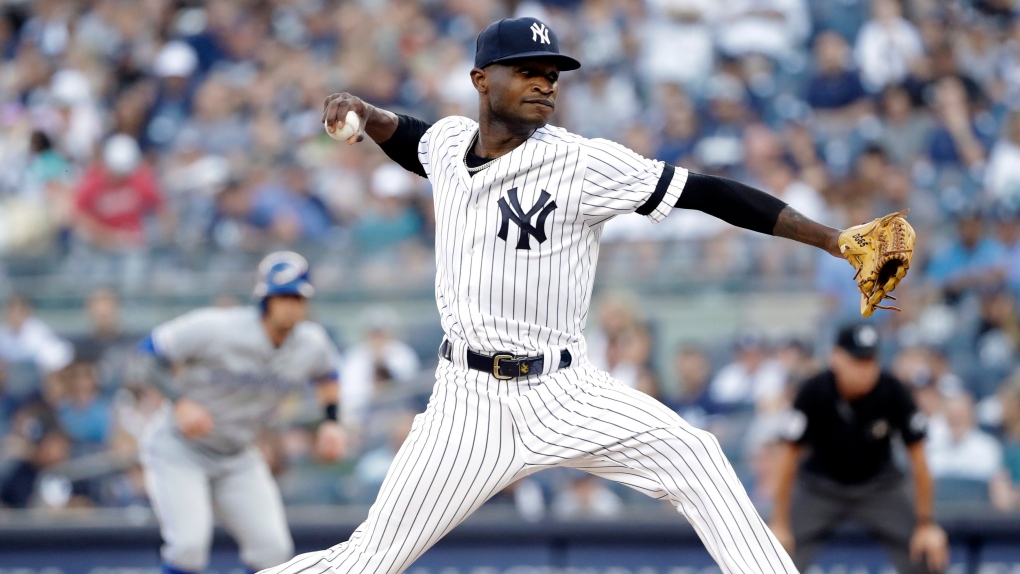 NEW YORK -- Many players use the All-Star break as a time to rest. Yankees starter Domingo German spent most of his time preparing for his next start.

German cruised through six innings of three-hit ball, Edwin Encarnacion hit a three-run double and the New York Yankees kicked off the second half with a 4-0 victory over the Toronto Blue Jays on Friday night.

"Although we had the break I knew I was pitching the first game of the second half and I kept training. I kept my routine going," German said through a translator. "We have a complex down in the Dominican Republic. ... I just went down there and explained what kind of routine I was working on, what kind of routine I like to do in between starts, and that's what we did."

German (11-2) threw just 78 pitches, 54 for strikes, and retired 15 in a row following Eric Sogard's leadoff hit. The team leader in wins, he limited Toronto to three singles and did not walk a batter.

"You always want to be economical out there," German said.

Pitching on eight days' rest, the slender right-hander featured a biting curveball that led to six of his seven strikeouts, all swinging. He threw 33 curves in all, generating 13 swings and misses.

"He went back to the Dominican. He threw a side when he was back there," Yankees manager Aaron Boone said. "He's got a really good look in his eye about what he expects to do out there. He's pitching with a lot of confidence, and a great way to kick off this half for us."

Playing in front of the largest crowd at Yankee Stadium this season, both starters traded zeroes until the bottom of the fifth, when Brett Gardner tripled against Aaron Sanchez (3-13) to lead off the inning. All-Star DJ LeMahieu's groundout scored the speedy veteran to break the tie.

"Just trying to get to third with no outs and my chances of scoring right there are pretty good with those guys coming up behind me," Gardner said. "So it's nice to get things going."

New York then loaded the bases on two hits and a hit batter before Encarnacion lined a hard-hit double off the visiting bullpen wall, plating three for a 4-0 lead.

The former Blue Jays slugger has struggled since joining the Yankees in a mid-June trade with Seattle, batting just .145 in 17 games.

"It's just all about timing. Get my timing right and I'm going to be all right," Encarnacion said. "I don't worry too much. I know what I can do."

Sanchez allowed four runs on seven hits, two walks and a hit batter in five innings. He leads the majors in losses and has dropped nine straight starts, the longest single-season streak since Jose Contreras also lost nine consecutive in 2007.

Gardner was 2 for 4 and also threw out Vladimir Guerrero Jr. trying to stretch a double to left in the seventh.

"He was aggressive," Blue Jays manager Charlie Montoyo said of Guerrero's baserunning blunder. "I appreciate him going all out to make it to second, but it wasn't the best decision in this game down four."

A moment of silence was held before the game for former Yankees right-hander Jim Bouton, who died Wednesday at the age of 80.

The Blue Jays did not record an extra-base hit or a walk for the first time since May 9, 2017, against Cleveland.

Blue Jays: RHP Marcus Stroman (left pectoral cramp) threw a bullpen session before the game and is slated to start Sunday's series finale. ... LHP Ryan Borucki (left elbow soreness) "felt like he wanted another start" for Triple-A Buffalo before returning from his rehab assignment, according to Montoyo. Borucki started at Pawtucket Thursday and will remain with the Bisons for at least one more outing.