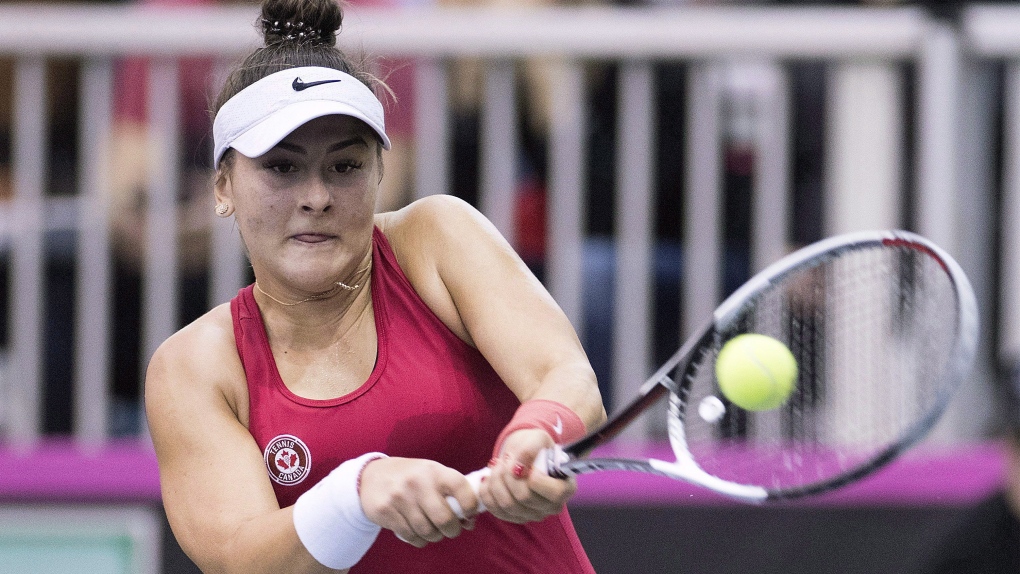 Bianca Andreescu of Canada returns to Lesia Tsurenko of Ukraine during their Fed Cup tennis match in Montreal on April 21, 2018. Andreescu has withdrawn from the Credit One Bank Invitational tennis tournament. THE CANADIAN PRESS/Graham Hughes

Saying she needs more time to return to top form, defending champion Bianca Andreescu has dropped out of the U.S. Open.

The Canadian made the announcement on Thursday, calling it a difficult decision.

"I have taken this step in order to focus on my match fitness and ensure that I return ready to play at my highest level," Andreescu said in a statement.

"The U.S. Open victory last year has been the high point of my career thus far and I will miss ... being there. However, I realize that the unforeseen challenges, including the COVID pandemic, have compromised my ability to prepare and compete to the degree necessary to play at the highest level."

Andreescu tweeted in support of the United States Tennis Association's decision to go ahead with the U.S. Open without fans in June.

The 20-year-old Andreescu, from Mississauga, Ont., hinted she was nearing a return before COVID-19 shuttered the sports world in March. But Andreescu, ranked sixth in the world, didn't enter any of the four events before the U.S. Open in the sport's restart in August.

Andreescu joins world No. 1 Ash Barty of Australia, No. 5 Elina Svitolina of Ukraine and No. 7 Kiki Bertens of the Netherlands in skipping the U.S. Open, Aug. 31-Sept. 13.

The season's third and final Grand Slam, the French Open, has been rescheduled for Sept. 27-Oct. 10. Wimbledon was cancelled this year.

Ranked outside the top 150 before last season, Andreescu rocketed into the top 10 with tournament victories at the BNP Paribas Open in Indian Wells, Calif., the Rogers Cup in Toronto and the U.S. Open, where she upset American legend Serena Williams in the final to become the first Canadian to win a singles Grand Slam.

Andreescu has been hampered by injuries for large chunks of her career. Even in her breakthrough 2019 campaign, she missed most of the clay- and grass-court seasons because of injury.

The Lou Marsh Award winner as Canada's top athlete in 2019, Andreescu emerged from relative obscurity to reach the final of last year's season-opening event in New Zealand with wins over former world No. 1s Venus Williams and Caroline Wozniacki.

Andreescu rode that momentum into Indian Wells, considered one of the top tournaments on the WTA Tour after the four Grand Slams. She upset Germany's Angelique Kerber in the final.

Just a week later, the two met again with Andreescu prevailing in a tight match in Miami, after which an emotional Kerber called the Canadian a "drama queen."

However, Andreescu retired from her next match with a shoulder injury, keeping her out of all but one tournament before the Rogers Cup.

At her hometown event, despite rust, Andreescu opened with a win over fellow Canadian Eugenie Bouchard and then fought through several lengthy matches to make the final against Williams. After just four games, Williams retired with a back injury, giving the title to Andreescu, who embraced the American in the immediate aftermath of her decision and earned praise from the longtime star for her words of encouragement.

In the rematch at the U.S. Open, Williams staged a big rally in the second set before Andreescu rebounded to finish off the home-country favourite in straight sets.

After taking several weeks off, Andreescu's 17-match win streak finally came to an end with a loss to Naomi Osaka at the China Open. In the same country weeks later at the WTA Finals in October, Andreescu suffered the knee injury.