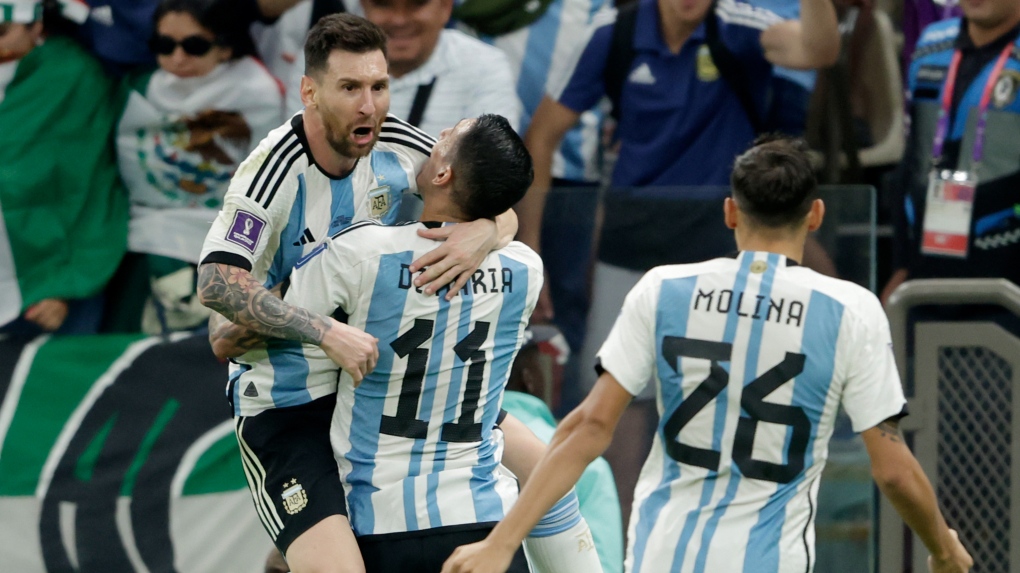 Lionel Messi of Argentina celebrates 1-0 with Angel Di Maria and Nahuel Molina during the World Cup match between Argentina vs. Mexico at the Lusail Stadium on Nov. 26, 2022 in Lusail Qatar (Photo by Rico Brouwer/Soccrates/Getty Images)

Another day of World Cup 2022 action returned as the Group Stage continued on Saturday with teams starting to look towards qualification for the Round of 16.

Previously on Friday, Iran bounced back from its humiliating 6-2 opening defeat with a dramatic 2-0 win over Wales.

Both England and Netherlands were outplayed by the U.S. and Ecuador, respectively, but escaped with draws.

Senegal defeated Qatar 3-1, meaning the host nation now has no chance of qualifying for the next round.

Here is what you need to know from Day 7 in Qatar.

Argentina needed to avoid losing to Mexico, or they would have been eliminated stunningly but magic man Lionel Messi saved them in a 2-0 win.

A tense opening 45 minutes saw Argentina dominate possession of the ball (67 per cent) though Mexico looked the more threatening when moving forward in attack.

Messi, in particular, was fairly quiet before his strike from outside the box in the second half went beyond goalkeeper Memo Ochoa and undid all of Mexico’s hard work to keep things deadlocked.

Enxo Fernandez then came off the bench to secure the victory late on.

Looking at Group C, Poland leads while Argentina is second followed by Saudi Arabia and then Mexico with one game to go. All four teams are still alive.

Kylian Mbappe's 86th minute winner against Denmark pushed France into the Round of 16, becoming the first side to advance past the group stage.

Denmark cancelled out Mbappe's earlier goal with a 68th minute equalizer by defender Andreas Christensen off a corner.

The Barcelona superstar assisted Piotr Zielinski superbly in the 39th minute to give Poland the lead, before a terrible giveaway by Saudi's central defender left Lewandowski one-on-one with the goalie for the second.

Saudi Arabia were awarded a controversial penalty in the 45th minute but hero from the first match Saleh Al-Dawsari's attempt was saved by Wojciech Szczesny. The Polish keeper then brilliantly denied a rebound attempt as well.

Poland also had opportunities in the 63rd minute when Arkadiusz Milik headed a cross from the left wing against the crossbar, and again in the 65th when Lewandowski kneed a cross against the right post.

Mitchell Duke scored a terrific header to give Australia a 1-0 win over Tunisia, staving off elimination.

Tunisia now face an uphill task to get out of the group with just one point in the bag heading into its final match against defending champion France.

Australia will go up against Denmark in its final match.

Neymar will miss Brazil's next group match on Monday against Switzerland due to an ankle injury he picked up against Serbia.

The action continues on Sunday with Canada one of the many teams hitting the pitch.

With files from Associated Press.