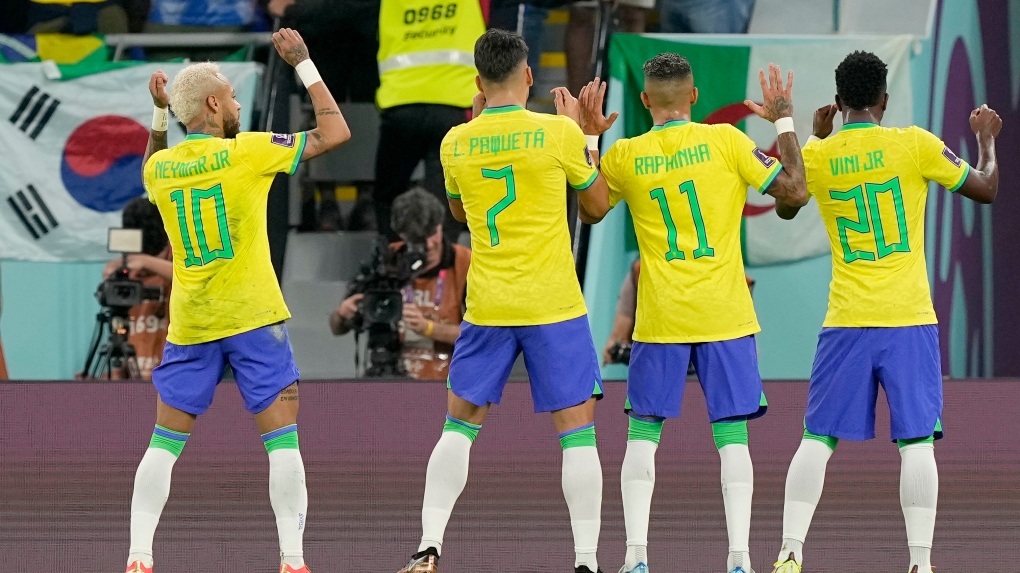 Brazil's Neymar, left, celebrates after scoring his side's second goal from the penalty spot during the World Cup round of 16 soccer match between Brazil and South Korea, at the Education City Stadium in Al Rayyan, Qatar, Monday, Dec. 5, 2022. (AP Photo/Martin Meissner)

It was a mesmerizing performance from Brazil as the team scored four goals in the first half before taking its foot off the gas in a 4-1 victory over South Korea.

Earlier, Croatia squeezed past Japan on penalties after the match finished 1-1 after 120 minutes.

Brazil will play Croatia in the quarter-finals.

The two teams will meet for the first time in the knockout stages of the men's World Cup.

Here’s all you need to know from Monday:

Brazil put on a vintage display in the first half before easing to victory in the second half against South Korea with a 4-1 final scoreline.

Vinicius Jr., Neymar, Richarlison, and Lucas Paqueta all scored to settle this match before the second half even kicked off.

Richarlison may now have both the goals of the tournament, finishing with his left foot after a sublime series of passes that he also played a part in with a few juggles of the ball with his head.

Paik Seung-Ho earned some consolation for South Korea in the 76th minute with a long range, left-footed strike.

Brazil will face Croatia in the quarter-finals.

Goalkeeper Dominik Livakovic was the hero as Croatia defeated Japan in a penalty shootout after the two teams finished level 1-1 after extra time.

Japan were the better side through the opening 45 minutes, thoroughly deserving their 1-0 halftime lead thanks to Daizen Maeda's goal in the 43rd minute.

After several moments of tension in Croatia's defensive area, Japan finally cracked through as Maeda tucked the ball in from close range off a corner.

Croatia's equalizer came against the run of play, a stunning header by Ivan Perisic in the 55th minute from the edge of the penalty box off a cross from defender Dejan Lovren.

Portugal head coach Fernando Santos has criticized superstar Cristiano Ronaldo for his reaction to being substituted against South Korea.

England forward Raheem Sterling has left the team to be with his family after his home near London was broken into.

Here are match times and broadcast details for the two remaining Round of 16 matches on Tuesday: