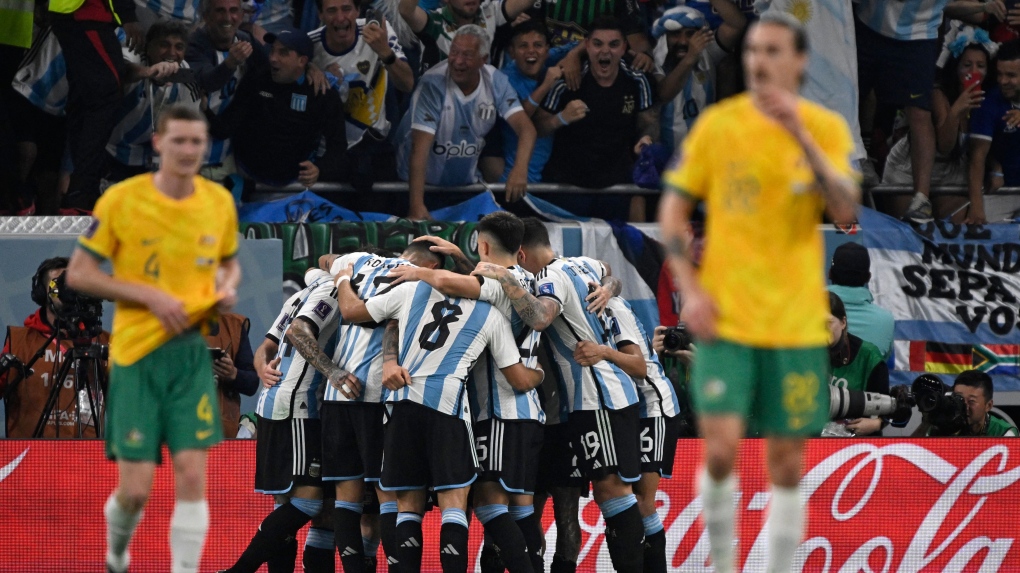 Argentinian players celebrate scoring their team's second goal during the Qatar 2022 World Cup round of 16 football match between Argentina and Australia at the Ahmad Bin Ali Stadium in Al-Rayyan, west of Doha on Dec. 3, 2022. (Photo by Alfredo ESTRELLA / AFP) (Photo by ALFREDO ESTRELLA/AFP via Getty Images)

The group stage is over, and the 2022 World Cup in Qatar has its final 16 teams left --- all who want to get their hands on the world’s most coveted trophy.

First the Netherlands battled against the United States fighting for a spot in the quarter-finals before Lionel Messi and Argentina went head-to-head with Australia.

To get to the knockout rounds, some teams had to pull off some pretty dramatic final group stage wins on Friday including South Korea and Switzerland. Catch up on what you missed here in our recap of yesterday’s matches.

Here is what went down on Day 14 in Qatar.

The second Round of 16 clash saw Argentina hold on to beat Australia 2-1.

After the opening 45 minutes, Lionel Messi's magic proved to be the difference with Australia pinning Argentina’s movement back. But when the door opened, the No. 10 poked home from the top of the box for 1-0.

Coming out into the second half Argentina kept up with the pressure and a mistake from Australia goalkeeper Mathew Ryan allowed Julian Alvarez to double the lead.

And while Australia eventually turned things 2-1 through after forcing an Enzo Fernandez own-goal, it was too little too late, and they crash out.

The Netherlands secured its qualification for the quarter-finals after a 3-1 victory over the United States.

The first 45 minutes saw the Americans start off strong, but all the hard work was undone by two goals from the Dutch almost in identical fashion.

A lurking Memphis Depay made the most of a cut-back ball within 10 minutes before Daley Blind did the same to make things 2-0 at the break.

Coming out into the second half the U.S.’s pressure increased and shaky defending from the Netherlands saw Haji Wright turn things 2-1.

Yet the late push wasn’t enough when Denzel Dumfries ensured the Oranje move on after a third goal.

There’s also some non-soccer-related content that’s been catching fans’ attention, as a camel pageant is one of the main attractions at the World Cup!

FIFA also released an explainer to prove why Japan’s goal against Spain did in fact count despite appearing to go out of bounds. But fans are still left scratching their heads, as the explanation continues to be a debate despite the technology to prove otherwise.

The action continues on Sunday with two more teams looking to reach the quarter-finals.