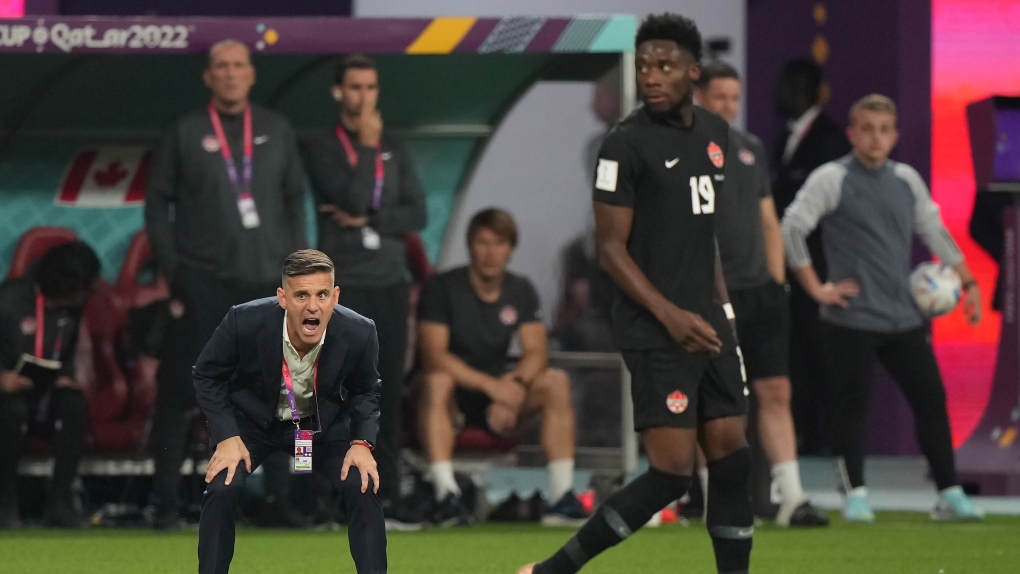 The build-up to this match was intense. From the moment John Herdman’s post-match comments were relayed to Croatia’s coach and players, there was a little extra to this clash.

Two minutes in, it looked as though Canada was ready to back up their coach’s talk by walking the walk as Alphonso Davies scored the country’s first goal at a men’s World Cup with a tremendous header off an inch-perfect cross from Tajon Buchanan.

“I’m very happy for the moment,” Davies told TSN's Matthew Scianitti after the match. “To get the first-ever World Cup goal for Canada, for me, just keep dreaming, keep believing, keep pushing.”

Creating this moment was a huge objective for the team but the manner in which Croatia steadily wrestled control after and came away with an impressive 4-1 victory left the players disappointed they couldn’t come away with more.

“I’m disappointed in the result,” Davies said. “It’s not easy to take defeat and today we lost the game. Everyone came out here, we did our best, we fought every single minute but this game is about winning. Especially in this tournament, we needed those three points and we’re looking forward to the next game. Hopefully, we can get something out of that.”

Canada were the lowest-ranked side in the group and weren’t favoured to make it out but gave plenty of reason for optimism after a spirited display against Belgium. With Croatia unable to find a way past an organized Morocco side, coming away with at least a point in this second match didn’t seem out of the question.

Croatia’s midfield trio of Luka Modric, Mateo Kovacic, and Marcelo Brozovic – especially the former two – showed their class, though, and coupled with an outstanding performance from Ivan Perisic and a pair of smart finishes by Andrej Kramaric proved too much for Canada to handle.

There were certainly moments where Canada could have had a second goal and made things interesting, but the extent to which Croatia commanded the middle of the pitch meant there was only going to be one winner. Canada showed what it can be at its best and its worst, Croatia showed that it can sustain its best for longer while also having a higher floor in terms of performance.

“A lot of pride in that performance,” Herdman said. “I thought in moments they showed they could compete on the world stage, to see us score our first goal and have that moment where the fans – knowing people back home east to west were celebrating somewhere – it was a great moment. When they scored that second goal I thought it was a turning point because we had to come out after the game and this team are absolute killers in transition. This is a team that when you give them that little inch, they take a yard.”

The defeat will hurt players and fans alike, but the moments that these players along with the coaching and support staff have helped create will inspire the next generation. Few will know better than Atiba Hutchinson, who captained the side and earned his 100th cap, what a moment like that could mean going forward.

“That was a first for us,” Hutchinson said. “We’ve been waiting for that [for] a very long time. It kinda makes you feel like a little kid again, it was an amazing cross from Tajon and to see the effort that Phonzie had to get on the end of it and put that ball in the back of the net, it was a great feeling. In that moment, you’re ready to push on from there and get the feeling you’re going to get something out of the game. I’m sure there were a lot of Canadians across our country celebrating like crazy and we’re just disappointed we couldn’t do more to get a better result here.”

Hearing the Canadian national anthem at the men’s World Cup, competing against quality sides in Belgium and Croatia, scoring the first goal, these are moments that will have children across the country now dreaming of doing even bigger things because of what they’ve seen.

The players themselves, several of whom are under the age of 25 will benefit from the fact that they have this experience to look back on. There was so much that they experienced for the first time that will serve them going forward. There are players who will have impressed enough to garner attention from higher quality teams and thereby continue to raise their level. The soccer world as a whole will have a new level of respect for Canada.

“We’ve got a lot of positives we can take from our last two games,” Hutchinson said. “Getting that feel of what it takes to be in a World Cup, we’ll learn from this and we have another game five days from now. We want to finish on a good note, we want to finish with three points and hold our heads up after.”