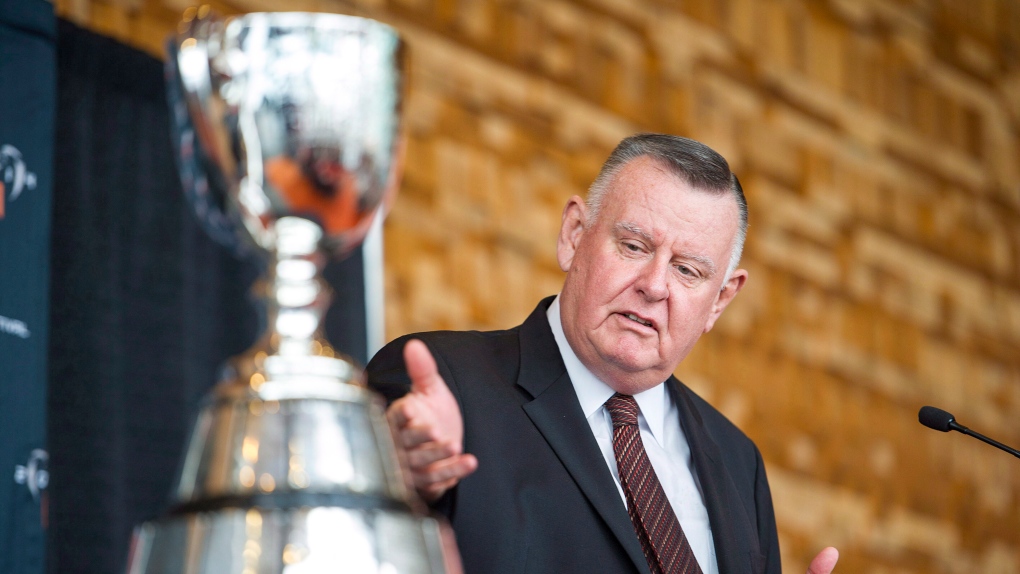 David Braley, the owner of the B.C. Lions Football Club, speaks during a press conference introducing the program of events for the 102nd Grey Cup Festival in Vancouver, B.C., on Wednesday, September 17, 2014. The Hamilton businessman who owned three CFL franchises, has died. He was 79.THE CANADIAN PRESS/Jimmy Jeong

A Hamilton businessman who owned three CFL franchises is being remembered as a Canadian icon.

David Braley died at his home in Burlington, Ont. on Monday morning. The owner and chairman of the B.C. Lions was 79. A cause of death has not been released.

Some people got the wrong impression of Braley, said Lions' president Rick LeLacheur.

"Some people thought he was gruff and rough. I like to say that he had the roar of a lion and a heart of gold," said LeLacheur, who knew Braley for nearly three decades. "He really did."

CFL commissioner Randy Ambrosie said in a statement that the former owner will "forever be remembered as a CFL legend." He added Braley was "our champion in every sense of the word."

"He also championed the CFL itself, as a member of its board of governors, its chair and as an interim commissioner," Ambrosie said. "Most of all, though, he championed an idea with passion and purpose: that the Grey Cup, the CFL and Canadian football play an incredibly important role in Canadian life and culture, and they deserve to be supported and cherished."

Braley was born in Montreal but raised in Hamilton. After attending McMaster University, he began his business career with General Motors Acceptance Corporation in Hamilton before joining London Life Insurance.

Braley entered the CFL in 1989 as the owner of the Hamilton Tiger-Cats. The franchise became community owned in 1992.

Braley returned to football ownership in 1997 when he bought the Lions.

He loved the club so fiercely that it appeared difficult for him to think about selling it in recent years, even as his health failed, LeLacheur said.

"He knew it was time. Between his health and his age. He just wanted to make sure that the Lions and the CFL went forward for another 100 years," LeLacheur said.

The club will work with Braley's estate in the coming weeks and months to determine what happens with the team, he added.

The businessman is survived by his wife, three sons, stepson and stepdaughter. It's unclear whether the family will continue to be involved with the team, LeLacheur said.

The Lions' president said he has spoken with some potential owners recently, but uncertainty around the 2021 CFL season has complicated the issue.

"No one knows right now if we're going to be playing a normal season, a partial season, with fans in the stands, with no fans, in a hub," he said. "There are so many right now things that could happen."

Braley's impact in Vancouver extended beyond the Lions. He also owned soccer's Vancouver 86ers and later the A-League's Vancouver Whitecaps, until 2000.

Braley secured himself a unique position on the Canadian sports landscape in 2010 when he became the Toronto Argonauts' owner, the only person in league history to own two franchises simultaneously. That prompted media to suggest games involving the Argos and Lions were for the Braley Bowl.

He maintained ownership of the Argos until May 2015 when he announced the sale of the franchise to Bell and Larry Tanenbaum, the chairman of Maple Leafs Sports & Entertainment. Braley has also served as the chairman of the CFL's board of governors and as interim commissioner (March 2002 to November 2002).

"It was heartbreaking to receive the call that David passed away," former Lions coach Wally Buono wrote on Twitter. "It's a sad day for all the many people that David's life touched."

Braley's involvement in sport wasn't limited to football and soccer.

He served as chairman of the 2003 world cycling championship in Hamilton and was a director of Ontario's successful bid to host the 2015 Pan Am Games. He was a member of the board overseeing preparations for the Games but was forced to resign upon being appointed to the Senate in May 2010 by then-Prime Minister Stephen Harper.

However, Braley resigned his seat in November 2013 without publicly stating a reason.

He was inducted into the Canadian Football Hall of Fame in 2012 and the athletic centre at McMaster bears his name. He received the Order of Canada in 2019 for his contributions to the CFL, and for his entrepreneurial and philanthropic leadership in his community.

Braley was also a philanthropist and contributed $5 million to the athletic centre at McMaster. He has also made significant donations to the Cardiac, Vascular and Stroke Research Institute at Hamilton General Hospital, which also bears his name.

"He clearly has been -- and is -- a Canadian icon," LeLacheur said.

This report by The Canadian Press was first published Oct. 26, 2020

This is a corrected story. A previous version had the incorrect years of Braley's ownership of the Hamilton Tiger-Cats.