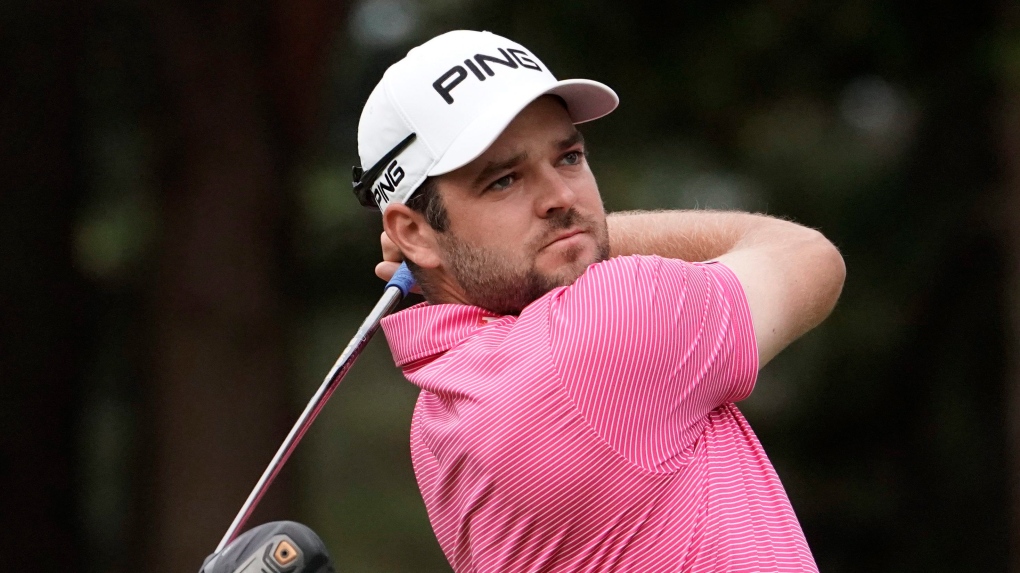 Corey Conners of Canada watches his tee shot on the 11th hole during the first round of the Zozo Championship PGA Tour at the Accordia Golf Narashino country club in Inzai, east of Tokyo, Japan, Thursday, Oct. 24, 2019. THE CANADIAN PRESS/AP/Lee Jin-man

It's not accurate to say Corey Conners' dreams came true in 2019.

"I don't think my dreams were quite that high," the Canadian golfer said.

After starting the year without full status on the PGA Tour, Conners played a piecemeal schedule before Monday qualifying for the Valero Texas Open in April. The native of Listowel, Ont., would go on to win that event and earn the final spot in the Masters the next week.

Conners earned more than US$2.9 million this season, one of the highlights of an impressive year in Canadian golf.

Adam Hadwin of Abbotsford, B.C., also represented the International team at the Presidents Cup earlier this month in Australia. At 49th in the world, Hadwin ended the year as Canada's top-ranked male golfer and will earn a spot in the Masters in 2020.

On the amateur circuit, full-time NHL referee Garrett Rank of Elmira, Ont., won the 117th playing of the Western Amateur, while Brigitte Thibault of Rosemere, Que., won a collegiate event and participated in the inaugural Augusta National Women's Amateur.

Brooke Henderson of Smiths Falls, Ont., had the best season of any Canadian. She notched two wins this year and had 13 top-10 finishes, the most on the LPGA Tour.

Henderson's second win came in June when she was just 21. It was the ninth of her LPGA Tour career, making her the winningest Canadian of all time on the PGA or LPGA Tour.

"To become the all-time winningest Canadian golfer on both the LPGA and PGA Tour is amazing," said Henderson. "This was a great year for many Canadian golfers. It's fun to be part of this trend and I'm excited to see it continue and get better in 2020."

Laurence Applebaum, the CEO of Golf Canada, declared 2019 as a year of "real celebration."

"I couldn't be more proud of 2019 as we look back and say it was a year we were celebrating golf and we were championing some of the best players in the world," said Applebaum.

Applebaum points to the success of the RBC Canadian Open in Hamilton and CP Women's Open in Aurora, Ont.

The two national championships had more than 175,000 people in attendance combined, a record for the organization.

Both events were also finalists for 'Tournament of the Year' by their respective tours at their year-end award ceremonies.

"We played at two epic tracks in 2019 and had world-class champions," said Applebaum.

Both the PGA Tour and LPGA Tour's 2019 players of the year -- Rory McIlroy and Jin-Young Ko, respectively -- won in Canada.

"In 2020 we're going from strength to strength in St. George's (in Toronto for the men) and Shaughnessy (in Vancouver for the women), two of the greatest golf courses and clubs in our country," Applebaum said.

While the individual successes of Canadians were undeniable in 2019, the pipelines will be a little emptier in 2020.

Henderson and Alena Sharp of Hamilton will be the only full-time Canadians playing on the LPGA Tour next year after the retirement of Maude-Aimee Leblanc of Sherbrooke, Que., and the long-term injury to Anne-Catherine Tanguay of Quebec City. Jaclyn Lee of Calgary will have partial status, playing under a medical exemption due to a severe wrist injury sustained in the summer.

Pendrith, meanwhile, is the only Canadian who earned promotion to the Korn Ferry Tour. Ben Silverman of Thornhill, Ont., and Adam Svensson of Surrey, B.C. did not regain PGA Tour status for this season so they will start have to start the season on Korn Ferry Tour. Svensson has a full card, while Silverman has conditional status.

Pendrith and Conners -- who live together in Florida -- are convinced 2019 will not be a one-off.

A year ago they both were wondering what the next 12 months would look like, without any real answers.

"I was just trying to figure out what mini-tour event I was going to play next," said Pendrith. "Now, it's exciting. Every week on whatever tour, there's going to be a Canadian in the mix."

Conners is in the upper tier of the PGA Tour after finishing in the top 30 of the FedEx Cup standings in 2019, but he still gets as much joy as anyone in following what his countrymen and women are doing.

"It's really fun to watch Brooke (Henderson) and be part of the group, but it's also really motivating to continue to rack up wins," said Conners. "It's an exciting future for Canadian golf. There's going to be more and more memorable moments."

This report by The Canadian Press was first published Dec. 27, 2019.