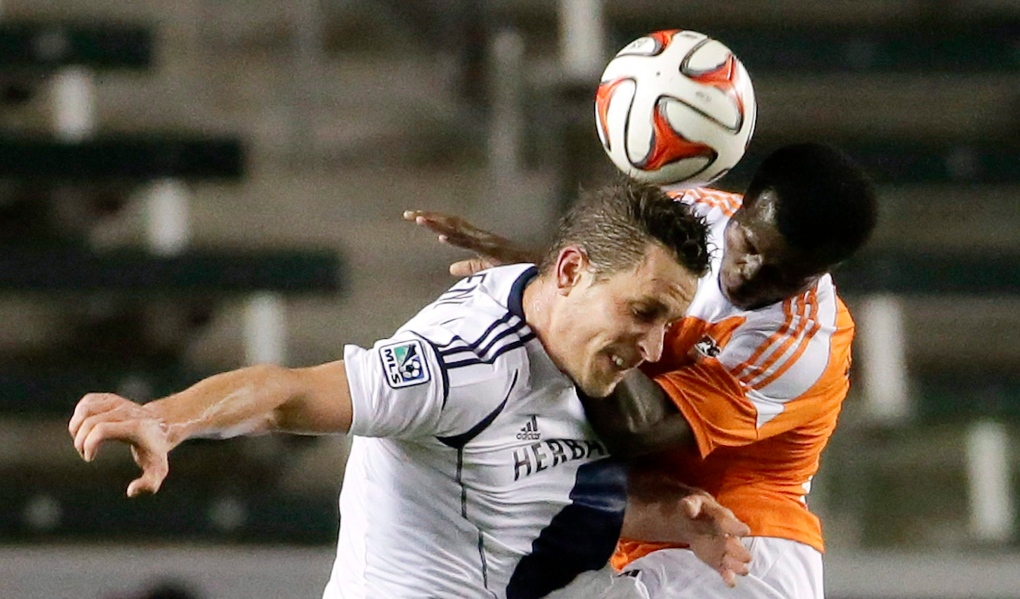 Los Angeles Galaxy's Rob Friend, left, heads the ball away from FC Shirak's Kadio Boris during the first half of an exhibition soccer game on Feb. 8, 2014, in Carson, Calif. (THE CANADIAN PRESS/AP - Chris Carlson)

TORONTO -- Soccer was not kind to Rob Friend the last few months but the Canadian international striker leaves the sport with plenty of fond memories and good friends.

Friend announced his retirement earlier this month after a championship season with the Los Angeles Galaxy cut short by concussion-related problems. The 33-year-old native of Kelowna, B.C., missed more than five months of action in 2014.

"It's a bit bittersweet going out as champions here in the MLS, to be honest with you," he said in a recent interview. "But obviously I've struggled a lot with this injury, had a lot of bad symptoms -- headaches, what not.

"It's bittersweet but at least I was fortunate enough to have played the places I've played, that I can go out with my head held high and be proud of what I've done. And move on to the next chapter."

Friend, a formidable figure at six foot five, was originally drafted by the Chicago Fire in 2003 but opted to sign with Moss FK and then Molde FK in Norway. He spent a year with SC Heerenveen in the Netherlands before embarking on a successful stretch in Germany.

Friend signed with Borussia Moenchengladbach for the 2007 season, scoring 18 goals to help the team earn promotion to Germany's top flight. He scored 28 goals in his three seasons with the storied club -- the pinnacle of his career -- before moving on to Hertha BSC, Eintracht Frankfurt and TSV 1860 Munchen.

He joined the Galaxy in January, seeing action in 10 games.

"It's been an amazing journey ... it's been unbelievable," Friend said. "I've met a lot of amazing people, played for some amazing organizations and clubs."

Friend, who made his debut for Canada in 2003, won more than 30 caps for his country.

Unfortunately, Friend still is not completely over his health issues.

"It's a very funny animal, the brain. You go through waves of a lot of headache-like symptoms and fogginess, just kind of not feeling 100 per cent. I've definitely passed that stage of struggling every day. The only issue I have at the moment now is when I do an intense workout I feel the headache coming on again.

"I've been able to manage it. Now I'm just going to take a little bit of time to really take care of the symptoms so hopefully they don't bother me long term."

Friend was hurt in a freak training-ground practice. He was running and a hard-hit ball caught him "in the temple, really unexpectedly, caught me totally off guard and knocked me to the ground."

For two days, he felt foggy and out of it.

"Then probably by Day 3 it just went into a straight headache that I couldn't kick for about two months."

The injury, along with numerous past knocks, forced him to evaluate his soccer future.

Friend was always a target man, physical and good in the air. His head was as important as his boot and he absorbed plenty of abuse going for goal.

"I've taken a lot of hits to my head over the years and it's serious issue now, the concussions," he said. "There's a lot of former athletes that are struggling long-term. I don't want that. I have to be a good husband and a good father to three kids and take care of my family so I kind of made that decision that it wasn't worth trying to push it another couple of years."

Friend says he "absolutely" had prior concussions.

"Diagnosed, I've probably had a few. Undiagnosed I've definitely had my fair share as well. I've been to a lot of experts round North America, talked to a lot of different doctors ... They all say accumulation of hits to your head -- whether that's constant heading, hard knocks to your head -- all take its toll. So I think that's got a lot to do with why my symptom is lasting as long as it is."

The symptoms had not been as severe in the past. But Friend says over the last few years, he noticed he felt "a little bit out of it for 24 hours or so" if he took a harder blow to the head or had done a lot of headers in practice.

It left him with a lingering headache for a day or two.

"Then it would go away. I never thought much about it. I just chalked it up as 'I just got kind of my bell rung a little but and it'll go away.' Then as the years went on, I started noticing the symptoms more and more and just didn't think much of it. Then it was just this one kind of freaky hit to the side of my head unexpectedly that really brought the long-terms symptoms on."

Concussion aside, Friend has fond memories of his year in Los Angeles and MLS.

"It's an exciting league and I wanted to be part of it," he said. "To be part of the best organization like the Galaxy, that's something I'm proud of."

It was also a homecoming of sorts.

Friend played two years of college soccer at UC Santa Barbara where he met wife Mari, a Los Angeles native who was the setter on the volleyball team. The family -- which includes a five-year-old boy and one- and three-year-old girls -- plans to move to Vancouver where he hopes to stay involved in soccer.

Having endured the hardships of a Canadian playing abroad, he remains a big booster of Canadian soccer.

"Canada is on the right track," he said, predicting more talent will flourish overseas.