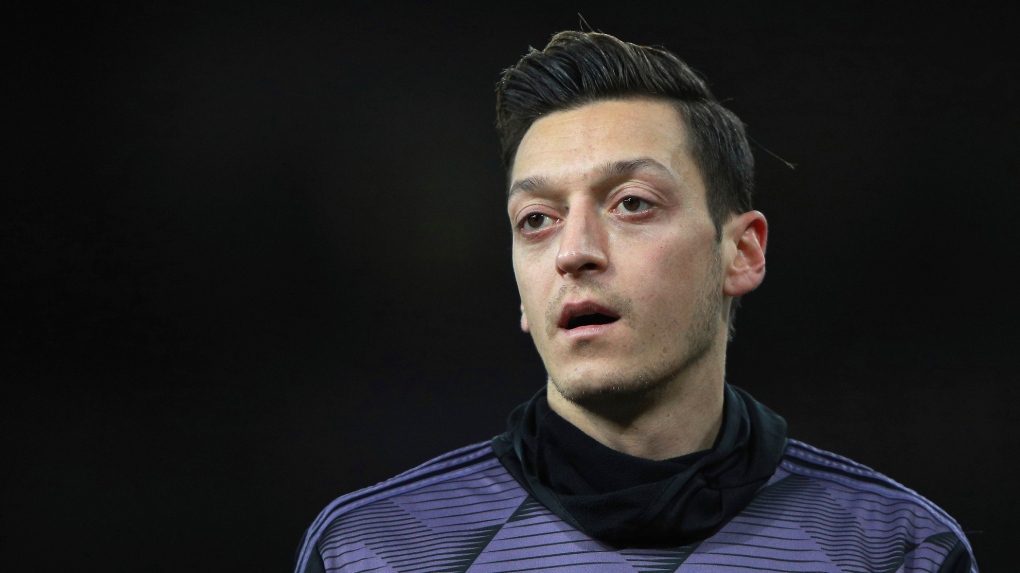 Arsenal's Mesut Ozil warms up prior to the English Premier League soccer match between Arsenal and Manchester City, at the Emirates Stadium in London, Sunday, Dec. 15, 2019. (AP Photo/Ian Walton)

BEIJING -- China's government said Monday that Arsenal forward Mesut Ozil was "blinded and misled" when he criticized Beijing's crackdown on Muslims in Xinjiang.

The government said Ozil was welcome to visit the northwest region and "look around."

Chinese state TV cancelled the broadcast of Arsenal's game against Manchester City on Sunday after the German-born player criticized mass detentions of Muslim people and the closure of mosques in Xinjiang.

"I don't know if Mr. Mesut Ozil has ever visited Xinjiang. It seems that he was blinded and misled by some false reports and untrue words," said Geng Shuang, a foreign ministry spokesman.

"We welcome Mr. Ozil to visit Xinjiang to look around," Geng said. "As long as he has a conscience, can distinguish right from wrong and uphold objective and impartial principles, he will see a different Xinjiang."

China has been accused of detaining more than 1 million Uighurs and other minorities in Xinjiang and subjecting them to political indoctrination, torture, beatings and food deprivation.

Beijing increasingly uses the threat of loss of access to China's growing market as leverage to try to control what companies, sports teams, universities and others say or do abroad about political issues.

China is the Premier League's most lucrative overseas broadcast market. Rights were sold for $700 million in a three-year deal that runs through 2022.

Arsenal tried to distance itself from Ozil.

"The content he expressed is entirely Ozil's personal opinion," the London team said. "As a football club, Arsenal always adheres to the principle of not being involved in politics."