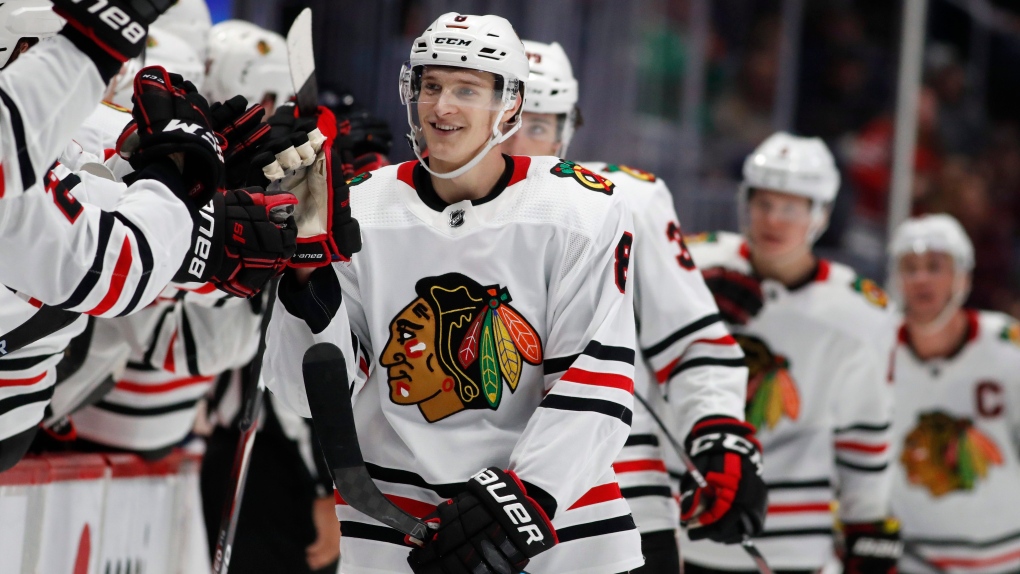 In this file photo, Chicago Blackhawks left wing Dominik Kubalik, center, smiles during a game against the Colorado Avalanche during the third period of an NHL hockey game Saturday, Dec. 21, 2019, in Denver. (AP Photo/David Zalubowski)

CHICAGO -- The Chicago Blackhawks say they will continue to use their team name because it honours a Native American leader who has been an inspiration to generations.

"The Chicago Blackhawks name and logo symbolizes an important and historic person, Black Hawk of Illinois' Sac & Fox Nation, whose leadership and life has inspired generations of Native Americans, veterans and the public," the NHL team said in a statement Tuesday.

"We celebrate Black Hawk's legacy by offering ongoing reverent examples of Native American culture, traditions and contributions, providing a platform for genuine dialogue with local and national Native American groups. As the team's popularity grew over the past decade, so did that platform and our work with these important organizations.

"We recognize there is a fine line between respect and disrespect, and we commend other teams for their willingness to engage in that conversation. Moving forward, we are committed to raising the bar even higher to expand awareness of Black Hawk and the important contributions of all Native American people. "

The Athletic first reported on the team's statement.

Under renewed pressure to change their name, the NFL's Washington Redskins announced a "thorough review" of the issue. In baseball, the Cleveland Indians are also looking into it while the Atlanta Braves declined.