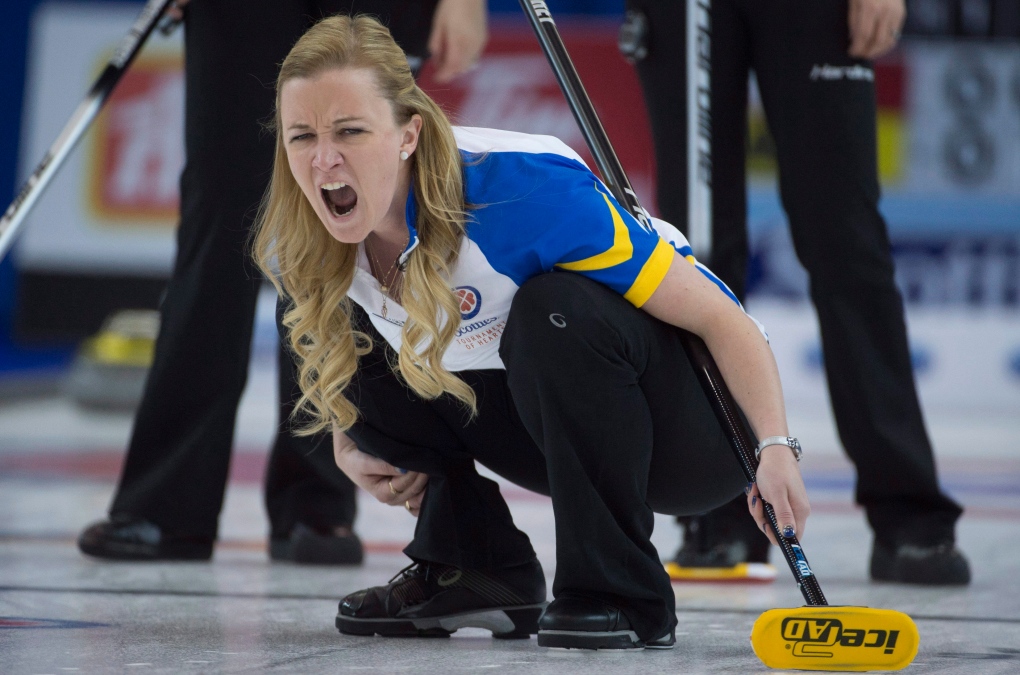 Alberta skip Chelsea Carey calls a shot during the gold medal game against Northern Ontario at the Scotties Tournament of Hearts, in Grande Prairie, Alta., on Sunday, Feb. 28, 2016. (Jonathan Hayward / THE CANADIAN PRESS)

The host province claimed this year's Scotties Tournament of Hearts with a 7-6 win over Northern Ontario's Krista McCarville on Sunday in Grande Prairie.

Carey drew for the win with her last shot of the game.

Carey is the daughter of Dan Carey, who won a national men's championship in 1992 playing third for Manitoba's Vic Peters. He was at Revolution Place to watch his daugher win 24 years later.

"I've dreamed of being a Canadian champion since I watched my dad do it in 1992," Carey said. "I have no words, honestly, I just don't know to say and that doesn't happen to me very often."

The skip was named the most valuable player of the tournament.

It was the first Canadian title for Carey, Nixon and Peterman. Peters won it 2012 with Heather Nedohin. When Nedohin decided to step back from the sport last year, her three teammates recruited Carey.

"When Heather stepped back, we looked around and Chelsea was our only choice," Peters said.

Carey had moved to Edmonton to form a new team after skipping Manitoba to third place at the 2014 national championship.

Taking over another team meant growing pains for Carey and her teammates as they learned each other's personalities and rock deliveries, as well as how to communicate with each other on the ice on the fly.

"Absolutely we're still a work in progress," Peters said prior to the final. "It's still too new to be that dialled in.

Alberta finished first in the preliminary round with a 9-2 record and beat defending champion Jennifer Jones in the Page playoff between the top two seeds.

After giving up a deuce and the lead to McCarville in the seventh end of Sunday's final, the host province answered with two in the eighth to lead 6-5.

Alberta had Northern Ontario's stone surrounded on the button in the ninth. Alberta held McCarville to one to be tied up coming home with hammer. Carey was faced with a draw to the eight-foot rings for the win in the 10th and did it.

Nixon, a 38-year-old lawyer, won an Olympic bronze medal with Shannon Kleibrink in 2006 and was representing Alberta at the Tournament of Hearts for a fourth time in her career. She and Kleibrink lost the 2008 national final to Jones.

Peterman, 22, is a curling instructor at the team's Glencoe Club in Calgary. Peters, 45, works in the oil and gas industry.

Carey, 31, left a marketing job at the University of Alberta to join the team in Calgary.

"Now I'm a starving, unemployed curler in Calgary in a horrible job market," Carey said. "I can't keep doing it for much longer. At some point I'm going to need to find work."

Tournament of Heart prize money combined with $144,000 in Sport Canada funding over the next two year adds up to $205,900 for Alberta. Northern Ontario earned $26,900 in runner-up money.

Jones, who was the defending champion coming into this year's tournament, beat Manitoba's Kerri Einarson 8-7 for the bronze medal. Third place was worth $21,900 and fourth $16,900.

If Carey wins a world championship medal in Swift Current, her team gains one-of-nine women's berths in the 2017 Olympic trials.

They've also earned an automatic berth in the Canada Cup in Brandon, Man., in December, as well as the 2017 World Financial Group Continental Cup of Curling in Las Vegas.