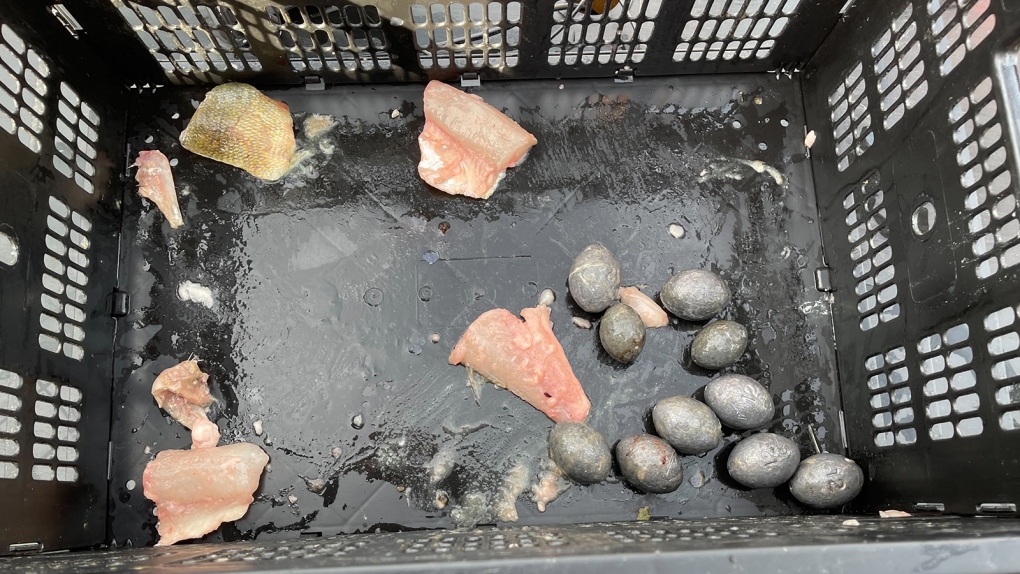 Lead weights were found inside the team's catch. (Courtesy Jason Fischer via CNN)

There's something fishy going on in the competitive fishing world.

The would-be winners of almost $29,000 at an Ohio fishing tournament were disqualified on Friday, after it was discovered their fish were stuffed with lead weights and fish fillets.

Jason Fischer, director of the Lake Erie Walleye Trail tournament, told CNN he was immediately suspicious when one team's fish weighed almost twice what he expected they would at the Cleveland championship weigh-in.

The walleye in the bucket looked like they should each weigh around four pounds, but the total weight indicated they would have to be at least seven pounds each, he said.

"I physically felt the fish, I could feel hard objects inside the fish," he said.

The moment when Fischer discovered the alleged cheating was documented in several now-viral videos posted on social media, showing Fischer, surrounded by competitors, slice open the fish with a knife and pull out what he said was a lead ball. Jacob Runyan, one member of the two-person team who allegedly cheated, stood by silently watching in one video Fischer shared with CNN.

"We got weights in fish," Fischer shouted. The crowd lobbed insults at Runyan.

"You just lost everything," one person is heard saying to the angler. The video also shows Fischer telling Runyan to leave and telling the crowd not to touch him.

Runyan and his teammate, Chase Cominsky, were set to win a $28,760 prize, Fischer told CNN. The prize money at each tournament he hosts comes from the entry fee each angler pays to compete.

Fischer hosts around eight tournaments over the course of the year, drawing competitors from Ohio, Indiana, Illinois, Michigan, Pennsylvania and Wisconsin, he said. Competitors face off to see who can achieve the highest total weight for a bucket of five walleyes caught in Lake Erie.

Neither Runyan nor Cominsky responded to CNN's request for comment.

Fischer said tournament officials are in touch with local authorities.

Stephanie O'Grady, media and outreach specialist at the Ohio Department of Natural Resources, told CNN the department collected evidence Friday and is preparing a report for the Cuyahoga County Prosecutor's Office.

"As this is an open investigation, we have no further comment at this time," she wrote in an email to CNN.

Fischer was "absolutely disgusted" when he discovered the alleged cheating, he said. "This is a family atmosphere," he said. "We all take pride in this sport."

"Everyone sacrifices so much" to stage and compete in tournaments, he said.

Orchestrating the large event takes precious time away from his family, he added. "For someone to essentially cheat them out of not only money but family time, I can't believe that they would."

Fischer said he knew Runyan and Cominsky from other tournaments, noting they won several tournaments previously.

But he said they won't be competing at the Lake Erie Walleye Trail tournament again anytime soon.

"They would never be able to fish at mine," he said.