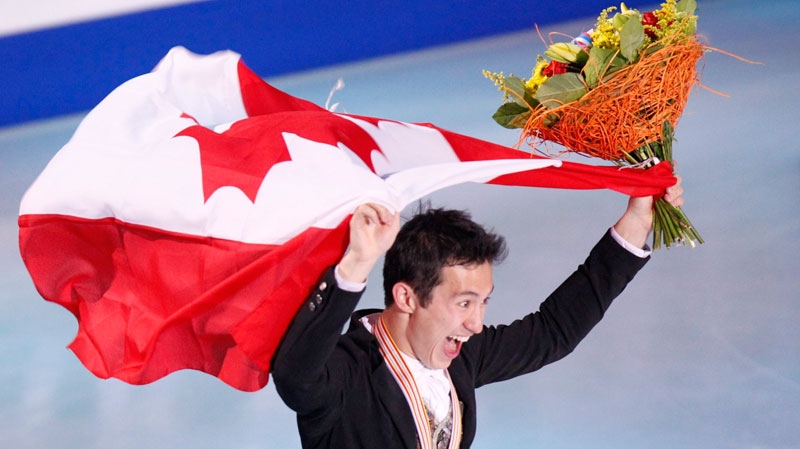 MISSISSAUGA, Ont. -- Patrick Chan felt an edit was in order in his quest for Olympic Games gold.

So in his final full season before the Sochi Olympics, the two-time world figure skating champion has a new coach and choreographers, two new programs, and a couple of new quadruple jumps he's still fine-tuning.

He's pushing the boundaries to stay ahead of the pack, a sort of pre-emptive strike he says in his pursuit of an Olympic title.

"And somehow I just feel at ease, it doesn't feel like anything is really that different, when I get on the ice everything seems to feel the same," Chan said Thursday, at Skate Canada's high performance camp.

The 21-year-old from Toronto captured his second consecutive world title last spring in Nice, France, and literally the next day coach Christy Krall resigned citing a difference in coaching philosophies.

Chan is coached by modern dance teacher Kathy Johnson, who had been assuming a larger role with the Canadian skating star last season. With Johnson, Chan said he's able to take on more responsibility for his training.

"(Krall) was a great help at that point in my career," Chan said. "I'm really glad I've made this next step working with Kathy, just me and her, it's been really great, much more relaxed. . .

"With Christy, she kind of directed and dictated what was going to happen. It's been a great transition, it's my time to kind of take over. It's not like Kathy is asking me what I should be doing, it's just happening, I'm at that age where I'm deciding that 'OK this is how I feel is going to be good for me and this is what I feel is going to be more of an advantage later in the season,'. . . how I train, how I rest, etc."

"It was a good change after five years of working with Lori. We left on mutual terms, she's always there to help me," Chan said. "But I wanted to do this, and I thought this was the right time going into Sochi. I wanted to know that I could work with other choreographers, that it doesn't have to be one singular recipe."

Chan, who has two quad toe loops in his long program, is working on a quad flip and quad Salchow that he said he might debut at the Canadian championships at Mississauga's Hershey Centre in January.

"The two quads are great, but I can't do them with my eyes closed yet, let's say," he said. "I'm just pushing the boundaries for fun and to keep it fresh."

Chan and Olympic and world ice dance champions Tessa Virtue and Scott Moir headlined the Canadian team's high performance camp at the Hershey Centre on a day where the temperature outside the ice rink soared to 27 C.

With the winter sports season just around the corner, the skaters said they drew inspiration from Canada's Olympians at the London Summer Games.

"I couldn't believe how emotional I was about the London Olympics," Virtue said.

The 23-year-old from London, Ont., found herself sobbing over a newspaper article about the Games when she was sitting with her mom in a hair salon.

"Something about seeing the rings and hearing the athletes' excitement, and just knowing what they were going through, I felt so connected to the athletes," Virtue said. "I was a bit of an emotional wreck for those two weeks, but it was so motivating and so inspiring and a nice reminder of what the Olympics can do for the world and to unite people."

Chan doesn't have a TV in his home in Colorado Springs, Colo., and so he had to "mooch off his teammates" to watch the London Games.

"I watched the opening ceremonies, Usain Bolt run, I watched the gymnasts, I watched the swimmers," Chan said. "After a while you sit there and watch and think, 'Jeez I can't wait to go.' You get so eager, and so frustrated because I really want to be there and want to perform in that environment again."

Chan was fifth at the 2010 Vancouver Games, but barring any unforeseen circumstances should be a favourite for gold in Sochi.

"I'm glad this is my second Olympics because going into Vancouver it felt like trying to climb Mt. Everest whereas Sochi is more of a realistic competition," Chan said. "I really want to make sure I do it right this time going into Sochi. How do I do that? I think it's just by enjoying myself and not really thinking about it. Automatically I'm going to get excited for it, I'm going to look forward to training for it, but it's going to be different because it's not going to be in my home country."

Virtue and Moir also have two new programs, including their free dance to the opera "Carmen."

"It's perhaps an overused piece of music in the skating world, but we heard it and it's so powerful and emotional and really dramatic and so something we haven't done before," Virtue said.

The world champions who are known for their intricate lifts and spins said their new programs are as demanding as any they've skated.

"Right now they feel pretty demanding because we're early in the season, all the tricks are new, when we skate it right now we have to think a lot," Moir said. "But that's the sign of a good program, we joke around and say we don't want it to be easy this time of year, because it means the programs aren't good, and we definitely feel we're challenged."

Chan and Virtue and Moir will compete at Skate Canada in Windsor, Ont., Oct. 26-28, to kick off what Moir called "the 401 season," in reference to Ontario's Highway 401.