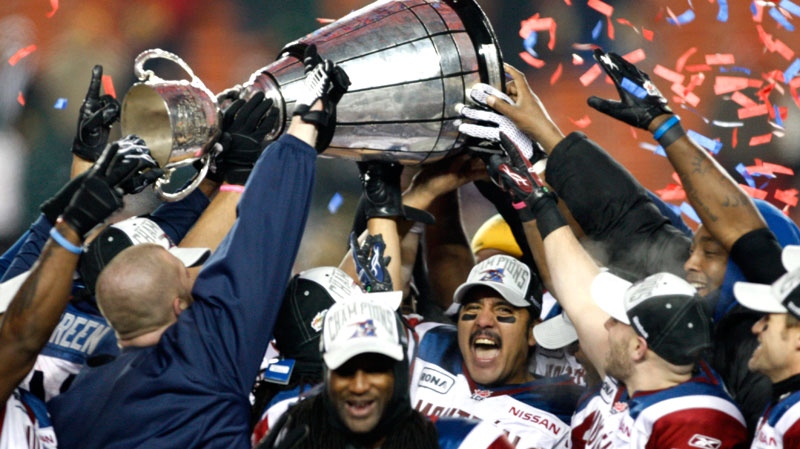 TORONTO -- There will be no Grey Cup game in November, but that's not stopping the CFL from celebrating its annual championship week.

The league announced Thursday it will be staging Grey Cup Unite from Nov. 16-22. Many of the events that are usually held during Grey Cup week will be presented virtually.

In August, the CFL cancelled the 2020 season due to the COVID-19 pandemic. The Grey Cup game was scheduled to be held in Regina on Nov. 22 but the iconic trophy won't be presented for the first time since 1919.

Hamilton is scheduled to host the 2021 Grey Cup, with Regina slated to stage the 2022 contest.

"It's an acknowledgment that our fans are connected to our league and want to feel that connection," CFL commissioner Randy Ambrosie said. "We have a place on the Canadian sports calendar and our biggest stage for that is Grey Cup week . . . it's important we continue to emphasize we own that week.

"That's the CFL's week, that's Grey Cup week and it's Canada's week. We're excited to have a chance to talk to our fans and get them engaged. I'm hoping we're getting to the back end of this pandemic to start to look forward to the future."

Some of the events planned include:

More events and details will be revealed leading up to Grey Cup Unite. Those wishing updates or to register to attend can do so by visiting GreyCupUnite.ca.

"We went through Labour Day with a lot of people missing that Labour Day feeling," Ambrosie said. "We said we weren't going to let that happen again, we're not going to let Grey Cup pass without a chance to bring people together and share that spirit that's such an important part of Grey Cup week.

This report by The Canadian Press was first published Oct. 29, 2020