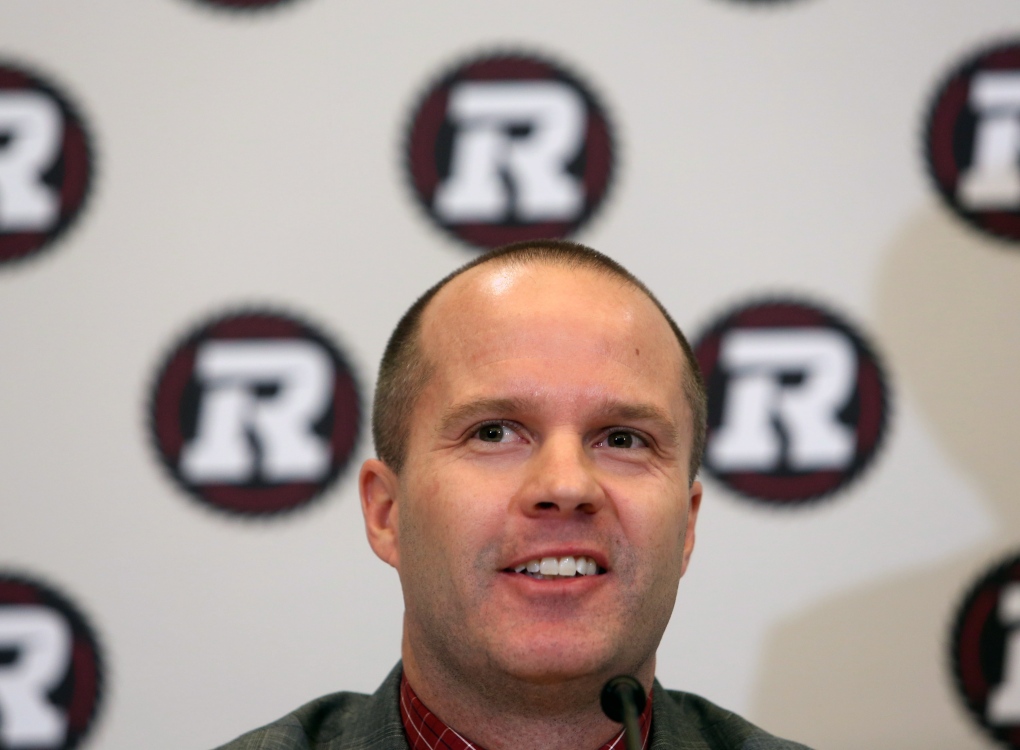 Rick Campbell speaks after it was announced he will become the first coach for the new Ottawa Redblacks CFL football team at a press conference in Ottawa on Friday, December 6, 2013. (Fred Chartrand / THE CANADIAN PRESS)

OTTAWA -- Rick Campbell always aspired to be a CFL head coach but only in the right situation.

The ability to help build an expansion team from the ground up proved to be the right opportunity for the 42-year-old, who was hired Friday as the first head coach of the expansion Ottawa Redblacks.

The Redblacks are scheduled to begin play next season.

Campbell has spent 15 years coaching in the CFL but this will be his first as a head coach.

"I've wanted to be a head coach, but I didn't just want to do it to say I was a head coach," said Campbell. "It had to be a deal where I fit the team and the team fit me so it was a good situation and like I said I had a gut instinct about Ottawa."

This will mark Ottawa's third tenure in the CFL. The Rough Riders operated from 1876 to '96 and were a founding member of the CFL in '58. The Renegades were born in '02 but only operated through the '06 season before being suspended indefinitely by the league.

Having the opportunity to be part of the Redblacks inaugural season was one of the more interesting aspects of the job for Campbell.

Not to say it won't be challenging.

"We're going to have to hire an experienced enough coaching staff that knows the league so we can literally hit the ground running."

Campbell has high hopes to field a competitive team in the Redblacks' first season.

"I'm going to look at as we're another team in the league right now," he said. "We're going to be signing players and coaches and we're going to try to win as many games as we can.

"You go into a year to try and win the big one. We're not going to get ahead of ourselves but we're going to go and build it the best way we can and win as many games as we can, that's for sure."

Campbell has spent the last two years as Calgary's defensive co-ordinator. This season the Stampeders led the league in sacks, with 63.

The bulk of Campbell's CFL coaching career was spent with the Edmonton Eskimos. Over the span of 11 seasons with the Eskimos, Campbell served as an assistant head coach, special-teams co-ordinator, secondary coach and defensive co-ordinator.

Redblacks general manager Marcel Desjardins said he interviewed six or seven candidates but Campbell stood out amongst the contenders.

"The key thing was the fact he had coached special teams, he had coached defence as a co-ordinator and coached on offence as well,: Desjardins said. "There's not too many people out there who have coached on all sides of the ball."

While there remains much work to be done, Desjardins said there's a sense of relief in having a head coach in place.

"It's a better relief knowing who it is," said Desjardins. "I'm so comfortable with this choice on so many levels.

"Personality wise our thought processes are the same. Just detailed, organized and then a big part of the equation too is who he's going to propose to us as a staff."

While there's no timetable in place for the hiring of support staff, both Desjardins and Campbell say the process has begun already.

Campbell won't have far to look for guidance, though.

His father, Hugh Campbell, is a legend in Canadian football, leading the Edmonton Eskimos to five consecutive Grey Cup championships (1978-82) as head coach and four more as general manager. Hugh Campbell also was a receiver with the Saskatchewan Roughriders when they won their first CFL title in '66, upsetting the favoured Ottawa Rough Riders 29-14 in Vancouver.

"I would always ask for advice from him if it's there," Rick Campbell said. "We have a good relationship that he doesn't force things on me.

"He's my dad, I'm his son and that's our relationship first and we'll talk ball once in a while."

Campbell will have little time to settle into the position, as the CFL expansion draft will be held Dec. 16.

Ottawa will select 24 players (eight imports, 16 Canadians) over three rounds. The Redblacks will take eight imports in the first round before selecting eight Canadians in each of the final two.

Desjardins says Campbell will have input into player selection but in the end it will be all about picking the best available players.