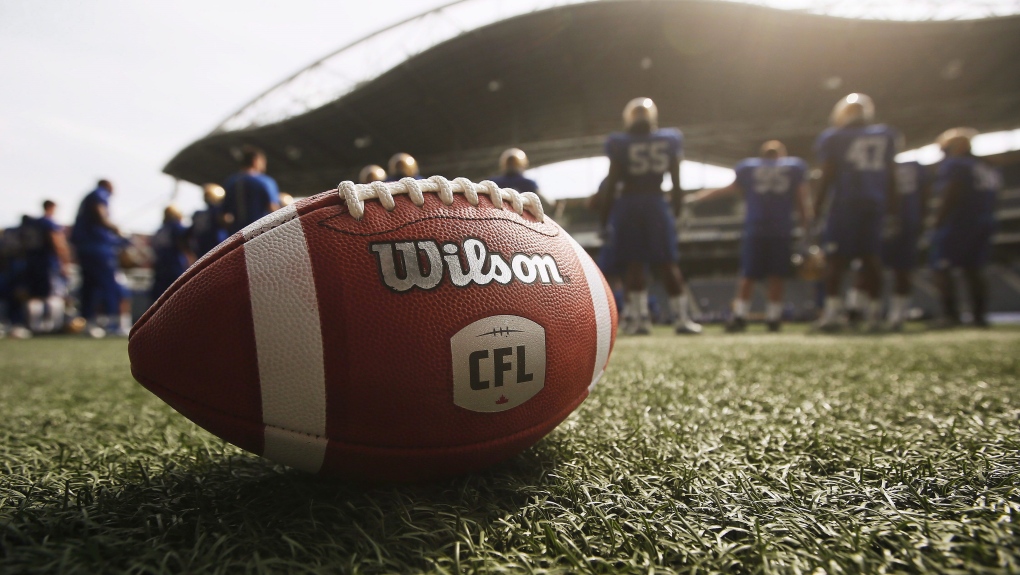 A CFL ball is photographed at the Winnipeg Blue Bomber stadium in Winnipeg on May 24, 2018. (THE CANADIAN PRESS/John Woods)
TORONTO -

The CFL and CFL Players' Association broke off negotiations on a new collective bargaining agreement Saturday.

The move comes after the two sides met for roughly 16 hours into the night Friday, then returned to the bargaining table Saturday morning. The current agreement, reached in 2019 and amended last year to allow the league to stage a 14-game campaign, is slated to expire at 12 a.m. ET on Sunday.

It’s unclear when the two sides will meet again. Training camps are scheduled to open Sunday but the union has directed players from seven of of the CFL's nine teams to participate in a work stoppage beginning at 12:01 a.m. ET on Sunday.

Edmonton Elks and Calgary Stampeders players will report to camp but will join the work stoppage once provincial labour laws allow. And while the union says Montreal Alouettes players won’t report Sunday, there's confusion regarding whether Quebec labour laws would put them in a legal strike position.

In a letter to CFL players that was posted on the league's website, commissioner Randy Ambrosie outlined the offer that was tabled to the union Saturday. He said the deal, which covers seven years, boosts total player compensation "by more than $24 million over the term of the agreement – plus an opportunity to share in revenue increases as we successfully work together to grow the league."

He added it "protects jobs for Canadian players, the bedrock of the CFL. It offers partially guaranteed contracts, for the first time in our league’s history. It recognizes the contribution of veteran Americans, with a new opportunity to extend their careers with their team, without restricting free agency in any way."

Other details of the offer include:

-- Two increases in the league’s minimum salary, which was CAD$65,000 last season.

-- $18.9 million in total guaranteed increases to the salary cap league-wide.

-- An opportunity for 25 per cent of all revenue growth over an agreed upon threshold to be added to the salary cap starting in 2023.

-- Clubs can re-sign their veterans to partially guaranteed contracts, a first for the CFL.

-- A club can choose one American player (non-quarterback), who has been in the league for at least four years or played with the same team for at least three years, who would be considered a Nationalized American.

-- The Nationalized American would count as a National on the roster, joining 20 or 21 Canadians who also count as Nationals on the roster.

-- Each roster would have a minimum of seven National starters. This would include at least six Canadian players. The seventh starter could be either the Nationalized American or an additional Canadian.

-- The roster would also include three quarterbacks of any nationality, 19 Americans and up to two Global players.

-- A starting Canadian quarterback would count as a National (Canadian).

-- An updated code of conduct that applies to all members of the CFL community, including fans, instead of just players.

-- A CFLPA seat on the board of CFL ventures, the commercial arm of the league to allow for all to work on marketing the CFL and building its business.

"It's designed to build a true partnership with you, our talented, hard-working, community minded CFL players," Ambrosie wrote. "This is a win-win offer.

"It creates a stronger partnership, so we can work together to further improve our game and build our business. And it comes at a critical time. Our league, our clubs, and especially our players have been through so much during the pandemic. We turned the corner in 2021, working together to get back on the field. Now we have an opportunity to accelerate towards a brighter future.

"Let’s seize that opportunity, together."

In a memo to players, the union said that the league was trying to undermine the CFLPA bargaining committee.

"You have or will receive an email from your Club outlining the League's spin on the breakdown of bargaining," the memo read. "We had tabled a counter offer to the League's 'take it or leave it offer' this afternoon. Instead of using the time to consider our counter proposals the league, instead, took the time to craft the communication you just received.

The memo also mentioned that the CFL purposefully walked away from the bargaining table to "try to interfere in our internal structure."

Despite their issues with the league's messaging, the union appears ready to resume negotiations.

"We expressed our regret at the league’s decision and told them we are ready to return to the table whenever they are prepared to negotiate in good faith."

"Stay strong and united," he tweeted. "You're worth a lot more than you think. @CFLPA"

The lone previous CFL strike came in 1974. The labour situation was resolved before the start of the season that year.

The 2022 regular season is scheduled to begin June 9.

This report by The Canadian Press was first published May 14, 2022.

Stay strong and united. You’re worth a lot more than you think @CFLPA