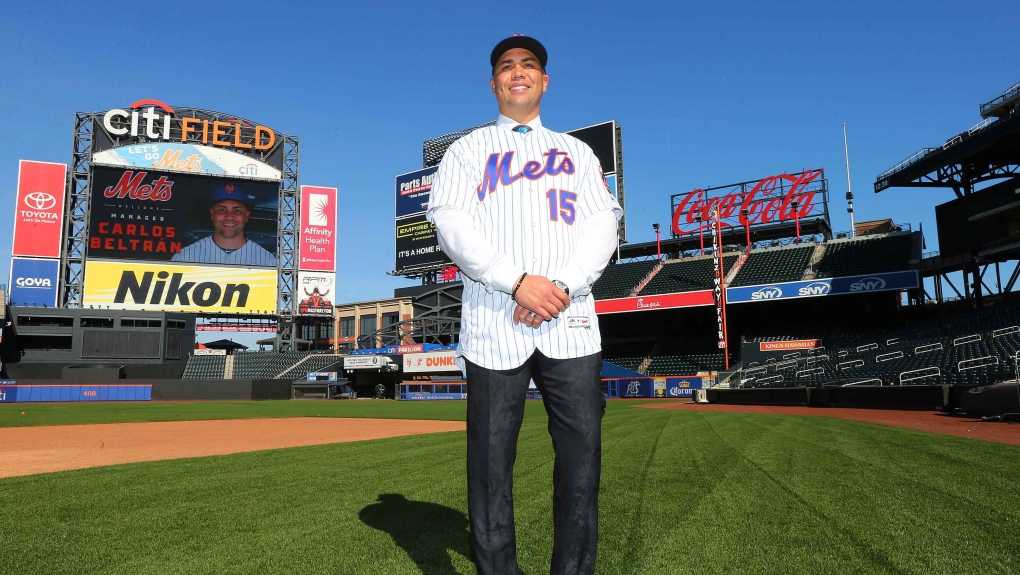 Carlos Beltran's managerial career with the New York Mets ended before it began as he stepped down for his involvement in the Houston Astros sign stealing scandal. Rich Schultz/Getty Images

Carlos Beltran's managerial career with the New York Mets ended before it began as he stepped down Thursday for his involvement in the Houston Astros sign stealing scandal.

"This was not an easy decision. Considering the circumstances, it became clear to all parties that it was not in anyone's best interest for Carlos to move forward as manager of the New York Mets."

Beltran becomes the third big league manager out of a job because of the scandal.

"At a meeting this morning with Jeff and Brodie we mutually agreed to part ways," Beltran said in a statement.

"I'm grateful to them for giving me the opportunity, but we agreed this decision is in the best interest of the team. I couldn't let myself be a distraction for the team. I wish the entire organization success in the future."

Beltran, 42, was named manager of the Mets in November, agreeing to terms on a three-year contract with a club option for a fourth year.

"We believe that Carlos was honest and forthcoming with us," Wilpon and Van Wagenen said.

"We are confident that this will not be the final chapter in his baseball career. We remain excited about the talent on this team and are committed to reaching our goals of winning now and in the future."

Beltran, who played seven seasons with the Mets, would have become the ninth person to both play for and manage the Mets. He had spent 2019 as a special adviser for the New York Yankees.

On Tuesday, a key figure in the sign stealing scandal, Alex Cora, who led the Red Sox to a World Series title in 2018 as manager and was the Astros' bench coach in 2017, "mutually agreed to part ways" with Boston.

The national pastime was rocked Monday when Major League Baseball announced it had found that the Astros illegally created a system that decoded and communicated the opposing teams' pitching signs during their 2017 championship season.

Beltran, the only Astros player named in Manfred's report, was an outfielder and designated hitter for Houston in 2017. The mention of his name in the report was brief -- on the second of nine pages.

"Approximately two months into the 2017 season, a group of players, including Carlos Beltran, discussed that the team could improve on decoding opposing teams' signs and communicating the signs to the batter," the commissioner wrote.

Beltran denied wrongdoing in the sign-stealing scheme in a November story in The Athletic.

"We took a lot of pride studying pitchers in the computer -- that is the only technology that I use and I understand," Beltran told The Athletic. "It was fun seeing guys get to the ballpark to look for little details.

"(In) the game of baseball, guys for years have given location and if the catchers get lazy and the pitcher doesn't cover the signs from second base, of course players are going to take advantage."

That didn't amount to cheating, he insisted.

"I call that using the small details to take advantage. I think baseball is doing a great job adding new technology to make sure the game is even for both teams."

Beltran, who played for seven teams in his 20-year MLB career, retired after winning the World Series with the Astros in 2017. He was a nine-time All-Star, three-time Gold Glove Award winner, two-time Silver Slugger Award winner and was named the 1999 American League Rookie of the Year.

Manfred said disciplining individual players was "difficult and impractical" because virtually the whole team was involved or had knowledge of the scheme and many players now play for other clubs.

MLB said Cora had arranged for a video room technician to install a monitor displaying the center field camera feed outside of the Astros' dugout.

One or more players watched the live feed of the center field camera on the monitor, and after decoding the sign, a player would bang a nearby trash can with a bat or a massage gun to communicate the upcoming pitch type to the batter, according to the report.

Manfred said Cora's discipline will be decided following a separate investigation into the Red Sox. The Red Sox illegally used a video replay room during regular-season games to decipher the signs of opposing catchers, three unnamed sources who were with the franchise that year told The Athletic.

In addition to the Luhnow and Hinch discipline, the Astros also must forfeit their regular first- and second-round selections in 2020 and 2021 drafts and pay a US$5 million fine.