Canucks' Alexander Burmistrov retiring from NHL, heading back to KHL 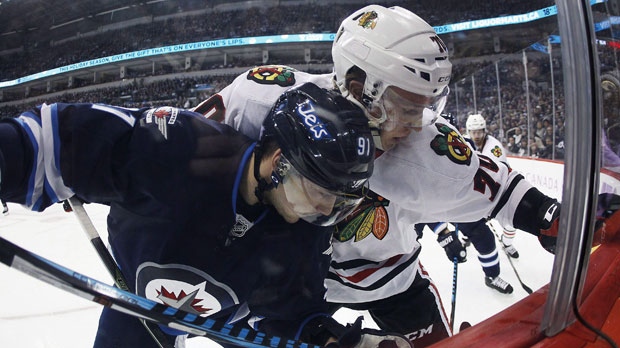 Winnipeg Jets' Alexander Burmistrov (91) and Chicago Blackhawks' Dennis Rasmussen (70) dig for the puck against the boards during second period NHL action in Winnipeg on Tuesday, November 15, 2016. THE CANADIAN PRESS/John Woods

Vancouver Canucks forward Alexander Burmistrov is retiring from the NHL and will continue his career in the Kontinental Hockey League, his agent says.

Burmistrov's agent, Dan Milstein, confirmed in a message to The Canadian Press that Burmistrov is retiring, citing a desire to go back home.

The 26-year-old centre had two goals and four assists in 24 games for the Canucks this season, although he was made a healthy scratch by head coach Travis Green on several occasions.

Burmistrov, who was drafted eighth overall in the 2010 NHL draft by the Atlanta Thrashers, had signed a one-year, one-way contract worth $900,000 with Vancouver on July 1.

The Kazan, Russia native played one season with the Trashers in 2010-11 before the franchise moved to Winnipeg the following year. He played two more years with the Jets before leaving the organization to sign a two-year deal with Ak Bars Kazan of the KHL in July 2013.

Burmistrov returned to Winnipeg for the 2015-16 season and played in 81 regular season games. But he only lasted 23 games with the Jets last year before being placed on waivers and was claimed by the Arizona Coyotes.

Burmistrov finishes his career with 37 goals and 64 assists in 348 games.