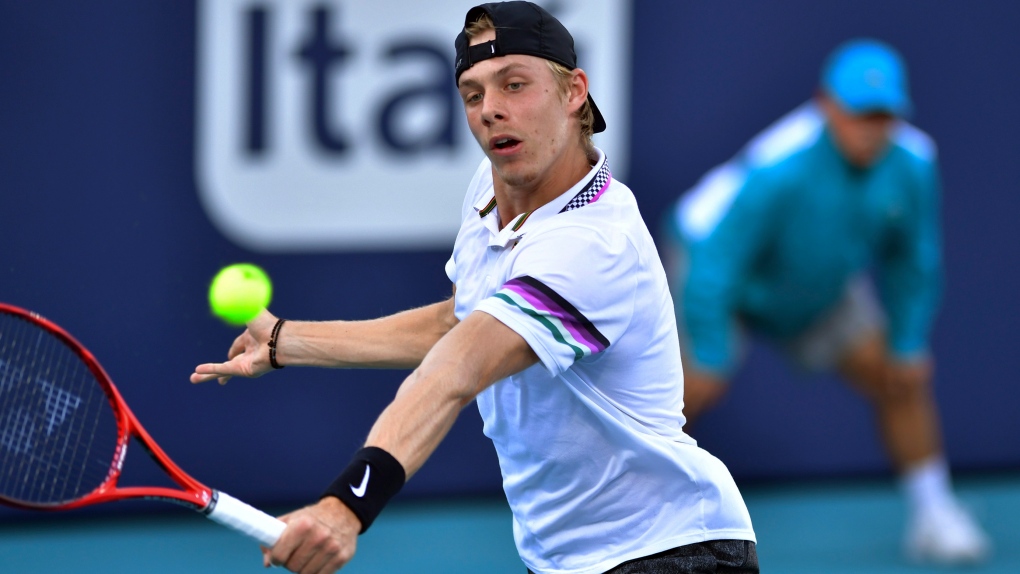 The 19-year-old native of Richmond Hill, Ont., joined fellow Canadian Felix Auger-Aliassime, 18, in the men's semifinals of the Miami Open with a 6-7 (5), 6-4, 6-2 win over American Frances Tiafoe on Thursday night.

"It's kind of crazy to share this with Felix," Shapovalov said. "I was just thinking in the locker room how far back we go, and from the national groupings when we were eight and nine years old, so it's so crazy to see how far we have come.

"And at such a young age, I feel like both of us have such of bright future ahead of us. It's really great to see him doing well. Honestly, it's not a shocker for me that he's gone this far, that he's doing so well."

Shapovalov and Auger-Aliassime are making headlines less than two weeks after 18-year-old Bianca Andreescu of Mississauga, Ont., captured the women's title of the BNP Paribas Open in Indian Wells, Calif.

Shapovalov, the 20th seed, will face No. 4 seed Roger Federer in the semifinals of the ATP Tour Masters 1000 event Friday night. Montreal's Auger-Aliassime, a qualifier, meets No. 7 seed John Isner of the U.S on Friday afternoon.

Federer, who beat No. 6 seed Kevin Anderson 6-4, 6-0 on Thursday, is 37 years old. That's the combined age of the two Canadian teens in the men's semifinals.

"It's great for the game because they will carry the sport when we're long gone and we'll be sitting on the couch watching those guys slug it out," Federer said about the young Canadians. "It'll be a joy to watch because not only are they great, great players but they're good people, too."

It will be the first career meeting between Shapovalov and Federer as well as Auger-Aliassime and Isner.

Federer was Shapovalov's favourite player growing up and the Canadian said it will be a "dream come true" facing the Swiss legend.

"I (will) try to put on some tennis sunglasses so I don't see him (smiling), so I see blurry or something, or I see someone else on the other side," Shapovalov joked.

"No, honestly, I'm going to try to go about it the same way. And I'm really happy with how the week's gone so far, so I'm just going to go out there, enjoy myself, just have a good time on the court and give it my all. You know, that's all I can ask at this point."

If Shapovalov and Auger-Aliassime both win, it would set up the first ever ATP Masters 1000 final featuring two teenagers. It also would mark the second all-Canadian ATP final, five years after Milos Raonic beat Vasek Pospisil in the Citi Open final in Washington, D.C.

The Tiafoe-Shapovalov match started more than three hours late because of rain. When it finally did get going, fans weren't disappointed as the hard-hitting players produced regular winners.

Shapovalov rallied from a set down with two breaks in the second set and another two in the third against the 28th-seeded Tiafoe.

With the score tied at 1-1 in the third set, Shapovalov took the lead for good when he converted on his fourth break-point opportunity of the game.

Shapovalov was better on first serve, winning 76 per cent of his points, as compared to 63 per cent for the 21-year-old Tiafoe. Shapovalov also had a 36-18 edge in winners.

As for Auger-Aliassime, it's fair to say he is a surprise semifinalist.

It's fair -- because he's even surprising himself.

Auger-Aliassime will face 33-year-old big-server Isner, the defending champion. Auger-Aliassime is the youngest player left in a tournament where plenty of youngsters have made splashes, yet he says there's no time right now to think about how rapidly his stock is rising.

"A lot of things are working, obviously," Auger-Aliassime said. "I think I have been just improving in the last couple of weeks. But I don't want to look back right now. I think I will do at the end of the tournament. Right now I'm looking forward to the next match and how far I can go in this tournament. Definitely I will take some time back home to reset and think about what happened."

He had Thursday off, which probably saved him a bit of a frustrating day mentally. Play was to begin at 1 p.m. in a women's semifinal match between 12th-seeded Ashleigh Barty and 21st-seeded Anett Kontaveit -- they were delayed an hour at the start because of rain, then for another 2 1/2 hours after getting only two games in before the next wave of rain arrived.

Weather is supposed to be better Friday, when Auger-Aliassime will face off with Isner.

Auger-Aliassime wasn't even in the top 100 of the world rankings two months ago, or in the top 50 when the Miami Open started. He's now assured of climbing to at least 33rd when the rankings get updated Monday and becomes the first men's player born in the 2000s to get past the No. 50 mark.

"Obviously it's a privilege to be compared to all these great players," Auger-Aliassime said. "I think it just shows that I'm doing good things, I'm on the right track."

On the women's side, Barty is finally through to her first Miami Open final after what turned into a six-hour delay.

The Australian endured three rain delays -- one before the match, two more during play -- to beat Kontaveit 6-3, 6-3 on Thursday night.

Barty, who will rise to a career-best No. 9 in the world rankings next week, will face fifth-seeded Karolina Pliskova in Saturday's final after she toppled second-seeded Simona Halep.

Mistakes doomed Halep, who lost to Pliskova 7-5, 6-1. Pliskova was up 5-0 in the second set when play was interrupted -- for at least the sixth time Thursday -- by rain shortly before midnight.

Halep, the No. 2 seed, would have replaced Naomi Osaka as the top-ranked women's player if she won the semifinal.