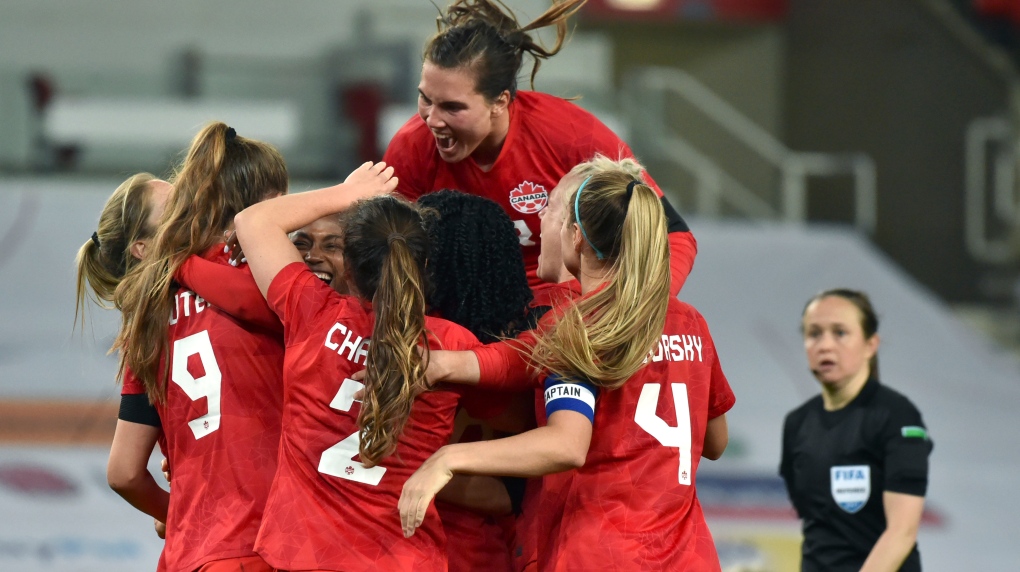 A high-profile opener against host Japan, a potential "banana skin" against Olympic debutante Chile and a first-round finale against Britain.

Canada got a bit of everything in Wednesday's Olympic women's soccer draw.

The eighth-ranked Canadians, bronze medallists at the last two Olympics, were drawn in Group E with No. 11 Japan, Britain (FIFA ranks No. 6 England, No. 23 Scotland, No. 32 Wales and No. 48 Northern Ireland separately) and No. 37 Chile in Wednesday's draw.

Canada will open July 21 against Japan at the Sapporo Dome, home to baseball's Hokkaido Nippon-Ham Fighters. The game comes two days before the July 23 official start of the Tokyo Olympics.

"What an opening game to play," said Canada coach Bev Priestman. "it's where we want to be, as coaches, as players."

Canada will then face Chile on July 24 at the Sapporo Dome and Britain on July 27 at Kashima Stadium.

"A relatively tough group," Priestman said. "A great test. When you want to go win a medal, you've got to play the best teams and I think we got two very good teams in our group. And then you look at a Chile -- they're a good side, they're hard to beat."

Canada has played at Kashima Stadium before. Goalkeeper Craig Forrest and the Canadian men held mighty Brazil to a 0-0 draw there at the 2001 Confederations Cup.

The draw, originally set for Japan, was held at FIFA headquarters in Zurich.

There will be a new women's champion this year with Germany failing to qualify.

"They're definitely a technical team that can move that ball quickly so our job will be to disrupt that rhythm," said Priestman.

The Canadian women have played Britain just once, winning 2-0 in the quarterfinals of the 2012 Games in London.

Canada lost 1-0 in its only previous meeting with Chile, in 2013. The Chilean women are making their Olympic debut, having qualified by defeating Cameroon in a South America-Africa playoff earlier this month.

Chile went 1-2-0 in a tough group in its World Cup debut in 2019 in France, losing 2-0 to Sweden and 3-0 to the U.S. before beating Thailand 2-0. The Chileans missed out on advancing as one of top four third-place teams on goal difference.

'You look at their results against top-10 teams, it's not been massive scorelines. It's been relatively close," said Priestman.

"Absolutely I won't be taking Chile lightly," she added. "I don't think we can. That could be the banana skin of the group if you let it be."

The winner of Canada's opening group will meet one of the two third-place teams that advances in the quarterfinals. The Group E runner-up will play the No. 2 team in Group F.

Should Canada win its pool and quarterfinal, the powerful Americans could await in the semifinals.

Priestman hopes to play four more games in advance of the Olympics, two during a June camp during the FIFA international window and two in the final lead-up to the Games. She plans to delay naming her 18-woman roster until as late as possible to give injured players like forward Adrian Leon and goalkeeper Kailen Sheridan time to get healthy.

Veteran midfielder Diana Matheson's injury is "progressing slower than we would have liked."

"I am closer (to team selection) but there's definitely a group of players that I think it's touch and go -- you've got injuries coming back in," said Priestman. "So (the) June window for us will be the deciding sort of window to finalize that roster. But I definitely think the week-in, week-out performances in club and even college is going to help us narrow tat down even more."

Others continue to put up their hand. Striker Evelyne Viens scored the stoppage-time winner for NJ/NY Gotham FC, formerly Sly Blue FC, against the North Carolina Courage on Tuesday night in NWSL play.

Priestman had a pretty good handle on what awaited her side at the draw. FIFA's draw principle of avoiding having teams from the same confederation in the opening round meant the Canadians were going to end up with Japan, either Britain or Sweden and one of Chile, New Zealand or Zambia.

Priestman, a native of England, used to be an assistant coach with England. The British coaching setup includes Rhian Wilkinson, a former Canadian international and assistant coach.

Priestman knows Britain's talent and has prepared for the Japanese recently. The Asian side was slated to take part in February's SheBelieves Cup before pulling out due to pandemic-related travel issues.

Canada has experience facing the host country, beating Brazil 2-1 in the 2016 bronze-medal match and Team GB in 2012.

The Canadian women upset Germany to top the group with three wins. They defeated France 1-0 in the quarterfinals before falling 2-0 to eventual champion Germany in the semifinals. Canada then downed Brazil for the bronze.

Also Wednesday, the 16 men's sides in Tokyo were drawn into four groups of four. Rio champion Brazil and runner-up Germany were drawn in the same group.

Unlike the women's competition, which features senior sides, the Olympic men's tournament features under-23 players. Men's teams are allowed three overage players at the Games.