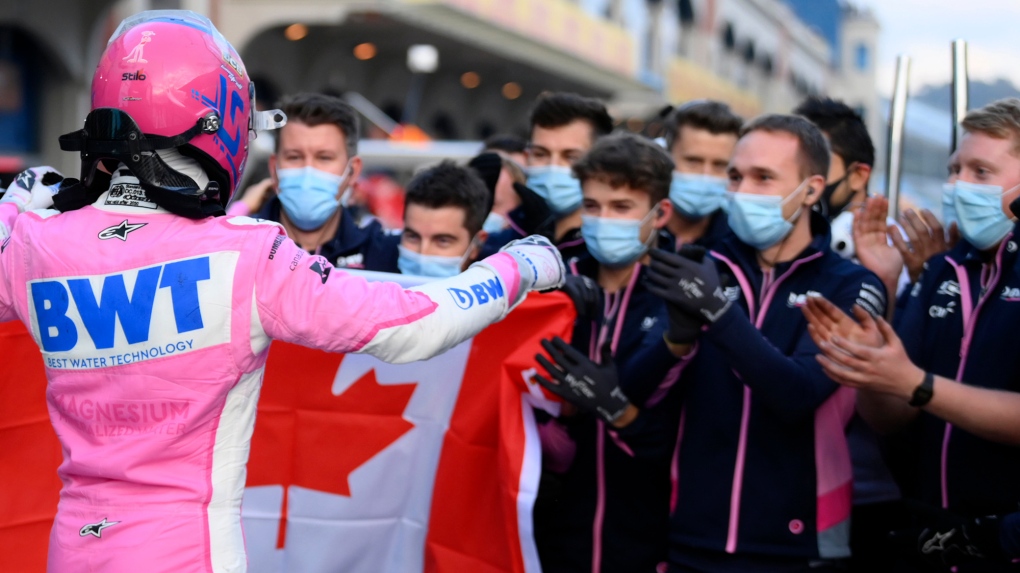 Racing Point driver Lance Stroll of Canada, front, celebrates his pole position with his team's mechanics after the qualifying session at the Istanbul Park circuit racetrack in Istanbul, Saturday, Nov. 14, 2020. The Formula One Turkish Grand Prix will take place on Sunday. (Clive Mason / Pool via AP)

ISTANBUL -- Lance Stroll took the first pole position of his Formula One career at a rain-soaked and chaotic qualifying session for the Turkish Grand Prix on Saturday.

The Canadian driver placed .3 seconds ahead of Red Bull's Max Verstappen and 1.56 ahead of Sergio Perez, who is Stroll's teammate at Racing Point.

"To put it on pole is a special moment for me," Stroll said. "The highlight of my career."

Runaway championship leader Lewis Hamilton was sixth and Mercedes teammate Valtteri Bottas only ninth on a resurfaced and skiddy Istanbul circuit last used in Formula One in 2011.

"It was one of the least enjoyable (qualifying sessions) I've had," Hamilton said. "The track feels terrible, it's just like driving on ice ... This whole weekend has been a nightmare, the grip's so poor."

Stroll, whose father Laurence Stroll owns the team, has been out of form for much of the season. His jubilation was evident as he threw himself into the arms of his engineers and mechanics, then clenched his fist as he grabbed a Canadian flag with his other hand.

"I can't really put it into words. I'm shocked," Stroll said. "I nailed pretty much every corner and put it together."

Verstappen looked certain to take pole after topping the first two sections of qualifying and had the leading time in Q3 when his team aborted the lap to switch him from wet tires to intermediate tires.

The move backfired and Verstappen was left feeling bitter and angry at the call, using an expletive over the team radio to describe the tires.

"We should have been doing better switching to that tire. We definitely missed something there," Verstappen said. "When you are first all the time, and come out second, it's not what you want to do."

Red Bull's Alexander Albon finished fourth ahead of Renault's Daniel Ricciardo, while it was a miserable day for Mercedes.

Both Ferraris failed to make it into Q3, with Sebastian Vettel in 12th place and Charles Leclerc 14th. Embarrassingly for Ferrari, Alfa Romeo drivers Kimi Raikkonen and Antonio Giovinazzi both made it into Q3 -- using Ferrari engines.

Hamilton only needs to finish ahead of Bottas on Sunday to clinch his seventh F1 title and equal Michael Schumacher's record.

The track was still drenched when drivers went out for the start of qualifying, known as Q1. Even at greatly reduced speed, drivers zig-zagged on the skiddy surface.

After Pierre Gasly's AlphaTauri went off into the grass, the session was halted by the red flag for about 40 minutes.

"I see nothing with the visor," Leclerc said back in the team garage. He was in 16th place when Q1 was halted and at risk of being one of five drivers eliminated.

The safety car came out to test the track before the session, followed soon after by sweeper truck removing excess water. After one more lap from the safety car, the session re-started with about seven minutes left in Q1.

Leclerc and Raikkonen, the winner of the inaugural race here in 2005, almost collided. Just three minutes later, the red flag came out after Romain Grosjean lost the rear of his car and went backwards into some gravel.

When it started again, Leclerc was still in 16th and had only 3:30 left to reach Q2. He held his nerve and qualified comfortably while Verstappen zoomed up from 15th to lead Q1 with a brilliant drive.

Hamilton, meanwhile, only just squeezed into Q2 with the 14th-best time. Q2 was held up for a few minutes while a crane removed Nicholas Latifi's Williams from the side of the track.

Verstappen topped Q2 ahead of teammate Albon and Hamilton, while Vettel and Leclerc were both eliminated along with the McLarens of Carlos Sainz Jr. and Lando Norris.

Earlier, Verstappen was again fastest in a cold and rain-soaked final practice.

Verstappen, who was fastest in both sessions on Friday, was quicker than Leclerc and Albon.

Hamilton did not set a lap time in the last practice. Bottas pushed hard in a bid to get some heat into the tires and was eighth quickest but a huge seven seconds off Verstappen's time.

Verstappen did well in treacherous conditions that caused several drivers to spin.

"Going into the wet today made it even harder," Hamilton said. "I like being in the wet but here the tires aren't working …10 times worse in terms of grip than anywhere else."

The race is being held without fans because of the coronavirus pandemic. This is the 14th race of the season and only three have been held with spectators.