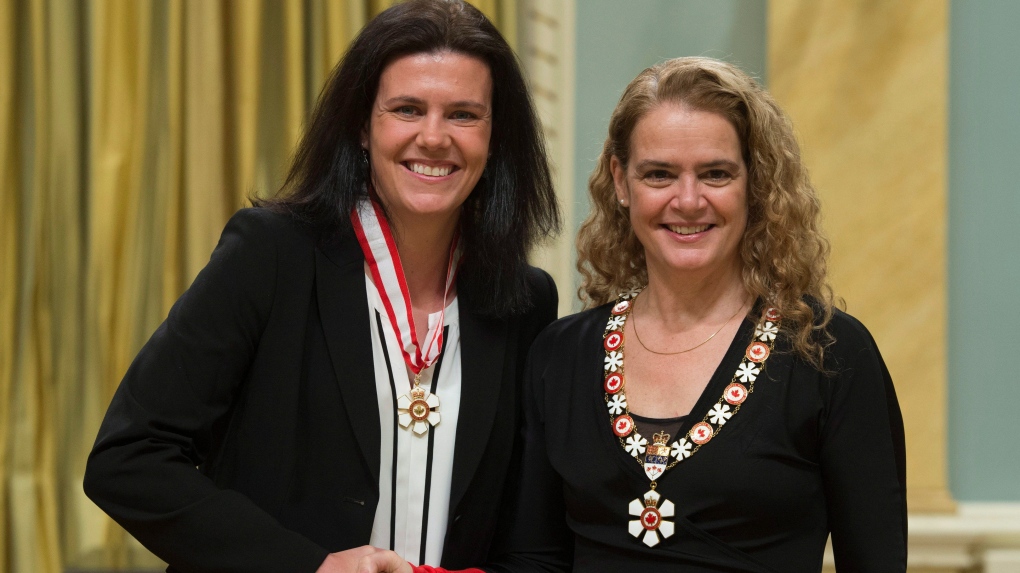 Governor General Julie Payette invests Christine Sinclair as an Officer of the Order of Canada during a ceremony at Rideau Hall, Wednesday, January 24, 2018. (THE CANADIAN PRESS/Adrian Wyld)

OTTAWA -- Canadian captain Christine Sinclair officially joined the ranks of the Order of Canada on Wednesday, billed as "the greatest player to have ever laced up soccer cleats for Team Canada."

The 34-year-old from Burnaby, B.C., attended the investiture ceremony at Rideau Hall, receiving the honour from Gov. Gen. Julie Payette

"Her leadership on and off the pitch has made her an inspiration to countless young athletes across the country," read her introduction.

"Order of Canada for Christine Sinclair, unbelievable person, living legend as a player, keep raising the bar Sinc, for all Canadians," said former Canadian women's coach John Herdman, who is now in charge of the national men's team.

"Cant tell you how pleased this makes me. Hard to imagine to a player who better represents our sport than Γåòsincy12 ... I have never met a more humble superstar. Recognition makes her legitimately uncomfortable but nobody deserves it more than her," he said.

Sinclair has scored 169 goals in 262 appearances for Canada, leading the way to back-to-back Olympic bronze medals.

Sinclair, named an Officer to the Order of Canada, was one of 47 people honoured Wednesday.

Created in 1967, the Order of Canada recognizes outstanding achievement, dedication to the community and service to the nation.