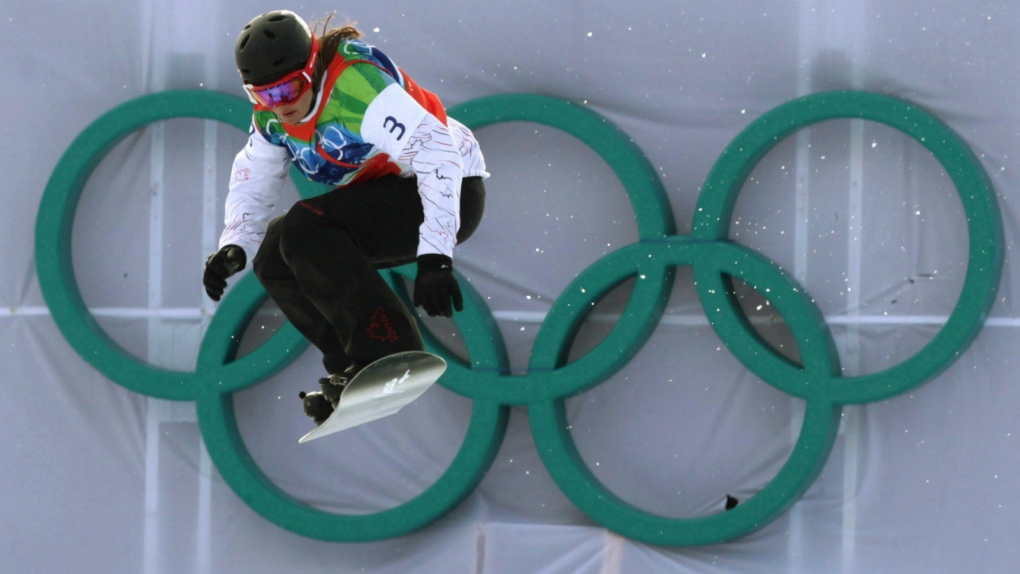 Maelle Ricker soars past a set of Olympic rings on her gold medal winning run during the women's snowboard cross final at the 2010 Vancouver Olympic Winter Games at Cypress Mountain in West Vancouver, B.C., on Tuesday February 16, 2010. (Darryl Dyck / THE CANADIAN PRESS)

Maelle Ricker thought the knee injury she suffered last fall was just another bump in the road.

Concussions, broken bones, strains and sprains had sidelined the Canadian snowboarder in the past, and she always came back strong.

Ricker rehabbed hard in hopes of overcoming the recurring knee ailment, but when she rejoined teammates for a training camp at the end of August, she knew she had already run her last competitive race.

"I've got a lot of mixed emotions -- emotions that change by the minute," Ricker said in an interview with The Canadian Press. "I really had the vision to keep going and keep racing. I've come back from injury many times before and this was going to be another routine stop.

"When I got back on snow ... a switch flipped inside and I knew that I wasn't going to be able to get back in the starting gate with the ability I need to race and to really commit 100 per cent and be on the podium. I promised myself that if I couldn't get back to that spot I wouldn't keep going."

Ricker was one of the stories of the 2010 Vancouver Olympics, winning gold in snowboard cross just two days after Alex Bilodeau became the first Canadian to top the podium at home with his victory in men's moguls.

She was looking to defend her title at the 2014 Sochi Games, but Ricker broke her wrist in training less than three weeks before leaving for Russia. She was healthy enough to compete at the event, but fell in the quarter-finals.

"In the lead up to those Games, I was riding technically as well as I ever had," said the native of West Vancouver, B.C. "One of the highlights of my career was working with the medical staff and with my team, (seeing) how much passion they showed to bring me to be able to even race in Sochi."

Set to turn 37 next month, Ricker was convinced she would be ready to go for the 2018 Olympics in Pyeongchang, South Korea, until only recently having to come to grips with her athletic mortality.

"I don't feel any regret, (but) I'm definitely disappointed," she said. "When I talk about it right now, the hairs go up on my arms. I would have loved to stand in that start gate with the next generation of girls and be racing with them in Pyeongchang."

Ricker made her Olympic debut as part of Canada's halfpipe team in 1998 in Nagano, Japan. She returned to the Games eight years later in snowboard cross in Turin, Italy, but crashed and had to be airlifted to hospital before winning gold in 2010.

Ricker, who also suffered a concussion prior to the Vancouver Games, said injuries simply came with the territory and that pushing the limits helped her rise above the competition.

"You're walking that line of being totally in control, but totally out of control at the same time and just trying to be able to manage it," she said. "Unfortunately I didn't manage it as well as I could have."

Undoubtedly one of the sport's pioneers, Ricker doesn't mention her Olympic gold medal, world title or X-Games triumphs when asked what memories she will cherish most from her career.

"I think of the moments leading up to the races," she said. "All the laughs with my teammates and my friends. It's really those moments that stand out the most right now, and I'm sure will forever."

Ricker said the Canadian snowboard team's future is bright and that she hopes to have a role moving forward, adding the fire that fuelled her at four Olympics continues to burn.

"I still love it. I still love every aspect of it. I still eat, sleep, break, bleed snowboarding," she said. "It's a really amazing lifestyle and one that I've been so lucky to be a part of for so long."