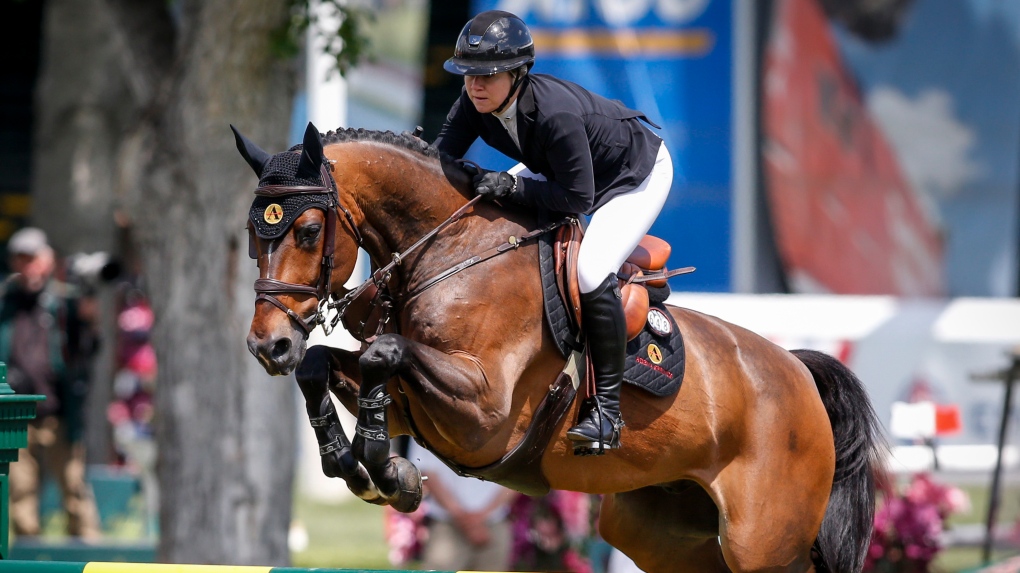 Canada's participation in show jumping at the 2020 Olympic Games is in peril because of a positive drug test at the Pan American Games.

Canadian rider Nicole Walker has been provisionally suspended by the world governing body of equestrian for testing positive for a cocaine metabolite at this year's Pan Am Games in Lima, Peru.

After finishing fourth in the individual event aboard Falco van Spieveld, Walker and other riders helped Canada qualify for next summer's Olympic team event in Tokyo with a fourth-place finish.

The 26-year-old from Aurora, Ont., tested positive for Benzoylecgonine, a metabolite of cocaine, in a sample taken on the day of the team final Aug. 7, according to an FEI statement issued Tuesday.

"I do not use illicit drugs, ever," Walker said in a separate statement issued by a public relations firm. "I was shocked and devastated to hear about these results."

The Pan American Games were the last chance for Canada's show jumping team to qualify for Tokyo. The team needed to place in the top four to do so.

"Whether in Peru, or in any competition setting for that matter, I am always fully aware of the possibility of being tested and would never expose myself to any substance that could test positive," Walker said.

"My Canadian teammates, my team in the barn, our horses and I, have all put a lifetime of effort towards an Olympic goal and I would never do anything to jeopardize that for my teammates or for myself."

Show jumping team chef d'Equipe Mark Laskin told The Canadian Press the team has not yet been disqualified from the Pan Ams.

That would not happen before Walker has a hearing with the Panam Sports Disciplinary Commission.

"I'm pushing forward with our plans with that in mind," Laskin said.

Walker can also apply to an FEI tribunal to have her provisional suspension lifted.

"I know Nikki to be serious, focused, committed, very intelligent," he said.

"She has a great deal of integrity and I one hundred per cent unwaveringly believe her. She would never do anything knowingly to jeopardize her career or our team."

Walker is the daughter of Belinda Stronach, president and chairman of The Stronach Group and former member of Parliament from 2004 to 2008.

"Nikki has dedicated her whole life to the sport she loves. She would never do anything to jeopardize that," Stronach said in a statement.

"I love her and support her, not only because I'm her mother, but because she has great integrity and is incredibly loyal, dedicated and honest.

"I'm confident that there is another explanation for this and fully stand behind her."

Laskin said he was with Walker when she was summoned for drug testing in Lima.

"I introduced the tester to her and I saw her reaction. If she'd had something to hide, I'm sure there would have been a change in her demeanour, her energy," he recalled. "There was nothing. She was calm."

He wonders if Peru's staple drink, coca leaf tea made with leaves from coca plants, could have produced Walker's adverse test result.

The coca plant contains alkaloids that can be chemically extracted to concoct cocaine.

While coca and coca leaves are illegal in Canada under the Controlled Drugs and Substances Act, coca tea is legal and consumed in several South American countries.

Coca tea is considered an altitude sickness remedy in the Peruvian Andes.

"It's readily available at most hotels in Lima," Laskin said. "I know Nikki is a tea drinker. She does not drink coffee. It seems like a plausible explanation to me."

Walker is the second Canadian 2020 hopeful mired in a doping scandal.

She too was provisionally suspended by the international governing body of her sport.

Eryn Ballard of Tottenham, Ont., Lisa Carlsen of Okotoks, Alta., and Mario Deslauriers of Bromont, Que., expressed support for their Pan Am teammate in the statement issued Tuesday, as did decorated riders Ian Millar and Eric Lamaze.

"There is zero, and I mean zero chance of Nikki ever putting herself or her teammates in harm's way," said Miller, a 10-time Olympian who retired from the national team this year.

"She is a very serious and highly disciplined equestrian rider. As early as 16 years of age, Nikki caught my attention. Instinctively, I recognized that she had the right stuff.

"Nikki continued to develop into the highly skilled and professional rider that she is today. She has represented Canada with honour and distinction."

Equestrian Canada said it is committed to clean sport.

"We also believe in standing behind our athletes, and fully support Nicole during this challenging situation," the organization said in a statement.

"EC will be working closely with Nicole and her legal team as appropriate next steps are determined.

This report by The Canadian Press was first published Nov. 12, 2019.