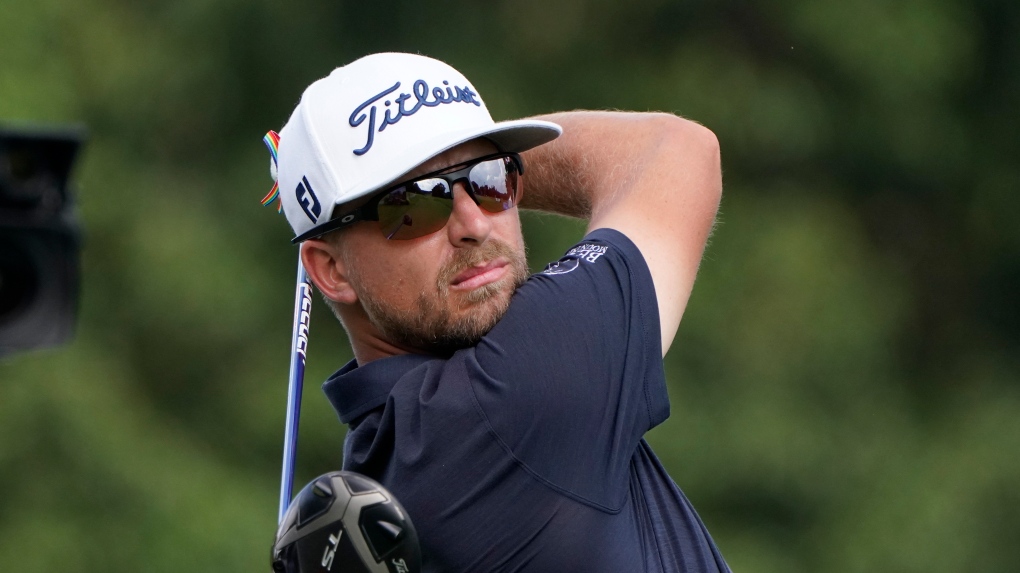 Roger Sloan, of Canada, drives on the 18th hole during the first round of the Wyndham Championship golf tournament at Sedgefield Country Club on Thursday, Aug. 13, 2020, in Greensboro, N.C. (AP Photo/Chris Carlson)

GREENSBORO, N.C. -- Canada's Roger Sloan is tied for the lead after he shot a career-low 62 in the first round of the PGA Tour's Wyndham Championship on Thursday.

Sloan's previous best round on the top tour was a 64 at last year's Mayakoba Golf Classic in Mexico.

"Tom and I go back to our Canadian Tour days (in 2011), so it's nice to get reunited out there and share some good stories and memories," Sloan said. "I think that puts you in a good frame of mind when one guy's making some birdies. I think I got the early track on some birdies, it kind of motivated him, and then when he's pushing through and passing me, you know, I want to finish strong."

Sloan has struggled this season, missing the cut in 13 of 19 events and sitting 178th in the rankings. He needs a big finish in the final regular-season event this week to make it into the top 125 and qualify for the FedEx Cup playoffs.

However, unlike in previous years, players outside the top 125 after this week won't lose their PGA Tour cards. The tour made the change after the COVID-19 pandemic halted play in March.

"I'm very fortunate because it doesn't matter what happens this week, I have status on the PGA Tour next year," Sloan said. "That's comforting to know, so we're just going to go out, we're going to do everything we can to win this golf tournament."

Varner had eight birdies, including four in a row midway through the round, without a birdie his first 15 holes. He finished with three pars.

Hoge had his only bogey of the day on No. 18 to lose sole possession of the lead.

Former U.S. Open champ and past Wyndham winner Webb Simpson was among a large group at 66.

A pair of major champions who challenged at the PGA Championship last week struggled in the opening round.