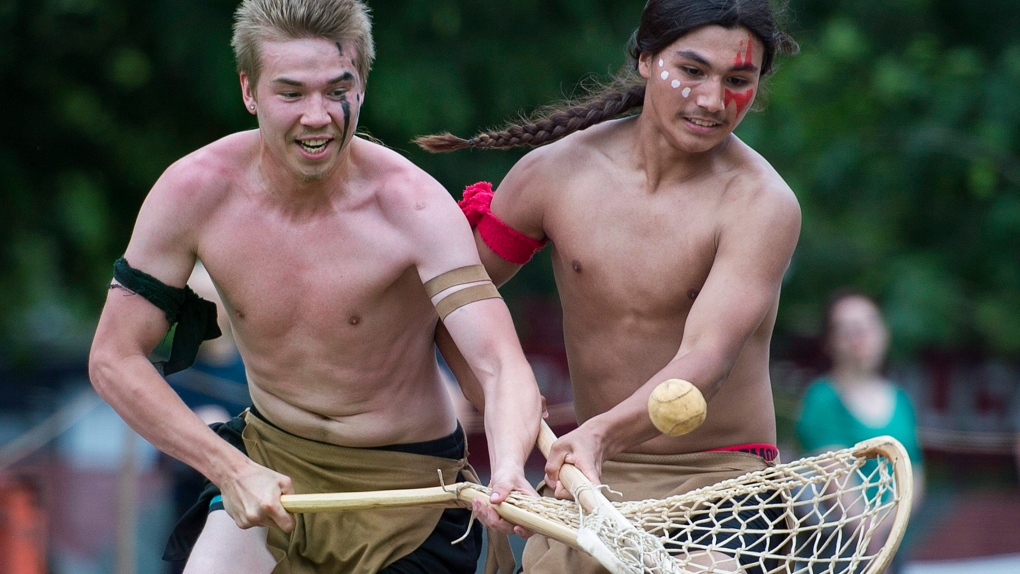 MONTREAL -- It was a game of lacrosse like few get to see: a group of youths, shirtless and mostly barefoot, with no helmets or padding, racing after a leather ball with hand-made wooden sticks.

There were no referees, few rules and no line changes -- only a wild free-for-all as the boys jostled and shoved, working to fling the ball at the wooden posts at each end.

The game, which took place recently at McGill University in Montreal, was organized to celebrate the 150th anniversary of organized lacrosse -- and to highlight the game's First Nations origins, which go back much further.

While the rules of modern lacrosse were adopted in 1867, the sport developed from a centuries cultural and spiritual activity practiced by several First Nations tribes.

Louis Delisle, a Hall of Fame lacrosse player who hails from the Kahnawake Mohawk territory south of Montreal, said it's impossible to know when the game started.

"But what's important is we all played it, and called it the creator's game because was a gift from the creator," he said in an interview.

He said the game was sometimes played with hundreds of players on each side on a terrain that could span several kilometres.

"It was a sport but it was also a training ground, a way to develop your endurance, your toughness, your tactics in learning how to use that stick to protect yourself and also to attack your enemy," he said.

In 1867, Canada's first sports governing body adopted the first official lacrosse rulebook, which had been written by George Beers, a dentist from Montreal who had fallen in love with the game.

Nets were brought in, field sizes were reduced and the number of players was standardized, according to Jim Calder, who has authored a book on the sport's history.

But although lacrosse quickly became popular, Calder says no government records exist to prove it was ever officially designated as Canada's national game.

He says while it's possible the documentation has been lost, it is more likely that Beers simply convinced people to view it that way.

"Beers was such a great promoter of the game, and wrote so many articles for so many newspapers on the game, that people naturally assumed that it was given by Parliament as our national sport," he said.

Hockey and lacrosse were only designated as Canada's national winter and summer sports in 1994.

The game played at McGill was part of a series of events organized by Calder and the Canadian Lacrosse Foundation in honour of the modern sport's 150-year anniversary.

It began with a ceremony that included a bald eagle, and featured youths from the Kahnawake Survival School re-enacting a traditional medicine game, played to help heal an ailing community member.

One of the 14-year-old players described the no-holds-barred contest as "painful."

"The ball is harder to pick up, harder to shoot, and when you get hit, it hurts," Rahsakaienhtha Cross said.

It was, he added, the best lacrosse game he'd ever played.

One of the enthusiastic supporters on the sidelines was Alfred Jacques, a maker of traditional wooden lacrosse sticks like the ones used in the game.

Jacques, a member the Onondaga nation from near Syracuse, N.Y., called the 10-month stick-making process a "labour of love" that involves cutting, shaping, drying and steaming the wood before it can be shaped and strung with cow hide.

He says the modern game has come a long way when it comes to acknowledging the contribution of First Nations, whose players were once banned from many leagues because they were deemed to be professionals.

"There was that resentment right there because this is our game, and you tell us we can't play," he said.

"Respect is coming now, now it is," he said.