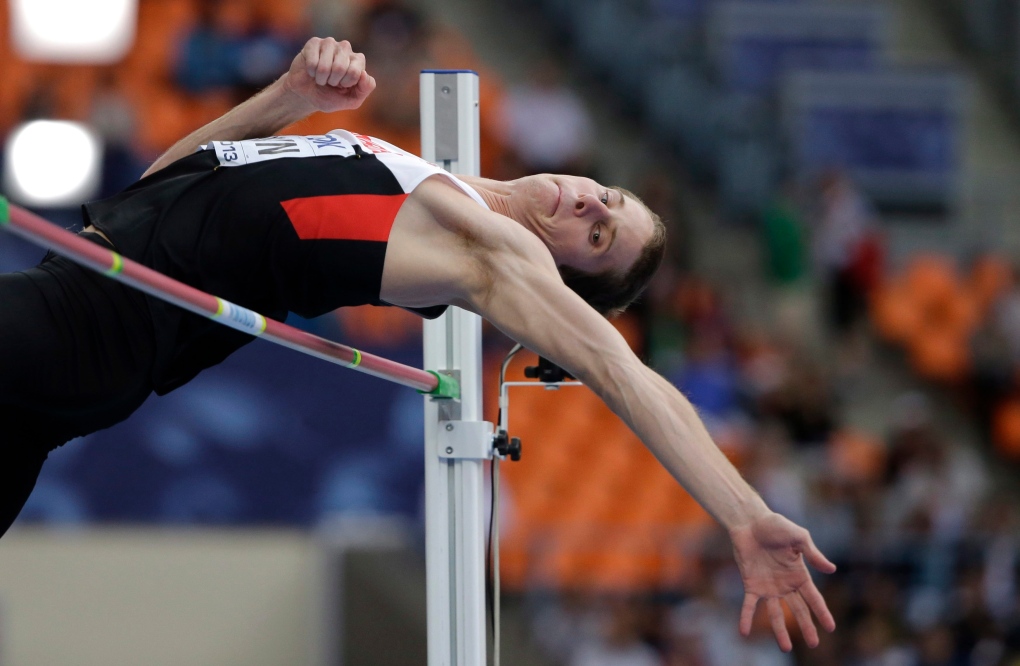 GLASGOW -- Derek Drouin launched himself into rare air when he cleared 2.40 metres in the high jump this season.

It's an exclusive club with only a dozen or so members -- a mark that's comparable, said Athletics Canada head coach Peter Eriksson, to running the 100 metres in 9.7 seconds.

The Corunna, Ont., native had set the mark as his ultimate career goal, but achieved it this season at the age of just 24.

And so he's made some revisions to those career aspirations, literally raising the bar.

"Growing up as a high jumper, I said if I could ever jump 2.40, I'd be pretty satisfied with my career," Drouin said.

"It's definitely a barrier for high jumpers. I went to school in the States (Indiana University) and the big thing for them was the seven-foot barrier. But 2.40, it seemed like uncharted waters for the most part, up until the last couple of years. . . It had been 14 years or something like that since someone had broken it.

"It was definitely rare waters."

Drouin achieved the feat at the Drake Relays in Des Moines, Iowa, in his first meet of this season and could be on pace to match or even better it at the Commonwealth Games.

"I definitely want to jump it again, I'd like to get consistent (at 2.40)," Drouin said "The last couple of meets I think are super important coming into a championship like this, and two meets in a row, I've at least taken attempts at 2.40 and felt really good.

"So hopefully tapering in my training and really gearing toward this one will be feel even better and that will be a realistic possibility."

"So (2.40) was something that I think at the end of last season when I jumped 2.38, I thought was a possibility," he said at the Canadian team's track and field news conference in Glasgow. "But it happened in the very first meet of this season so I didn't really have much time to access how I was feeling or how I was jumping.

"It came as a surprise, at the point it came in the season."

Drouin is No. 1-ranked in the Commonwealth and fourth in the world. His jump at the Drake Relays was the world's best at the time, but three others have cleared it since, including Bohdan Bondarenko of Ukraine and Mutaz Essa Barshim of Qatar, the world leaders at 2.42.

The sense is that Javier Sotomayor's world record of 2.45 metres -- just over eight feet -- set back in 1993 could finally go down.

It's a lofty expectation for Canada's best high jumper, but Drouin has exceeded expectations before. Take the London Olympics where he won a bronze medal a year after suffering a lisfranc fracture.

He suffered the gruesome foot injury -- think of a rider falling off a horse while getting one foot stuck in the stirrups -- when he planted awkwardly on a takeoff. The injury required surgery and left him with a foot full of hardware and sidelined him for eight months.

Doctors told him it make keep him off of Canada's Olympic team, but he roared back to win the team's only track and field medal in London.

Drouin's sister Jillian has been making headlines lately as well. The 27-year-old isn't on Canada's team in Glasgow, but recently won the heptathlon at the Pan American Combined Events Cup in Ottawa.

"She was in Delhi at the last Commonwealth Games and then had a couple of years of injury and now has broken through, so I'm really excited for her," Derek said.

Canada claimed 17 medals at the Games four years ago in New Delhi, but Eriksson warned against comparing results to India, where the time of the year -- the Games were held in October -- diluted some of the fields.

"It is tougher than it was in India, no doubt about it," he said. "But you look at it and you say, we have 15 athletes ranked top-3 in the Commonwealth Games. I would expect more than that because we have a young team, healthy team, there is no indication that our performance shouldn't be up to par, that we can't come here to kick some butt."

Canada's other gold-medal threats include Brianne Theisen-Eaton, who won silver in the hepathlon at last summer's world championships in Moscow, and world bronze medallist in the decathlon Damian Warner.

Track and field begins Sunday with the marathon. Lanni Marchant, who broke the Canadian record last fall in Toronto, will line up in the women's race. There are no Canadians in the men's marathon.