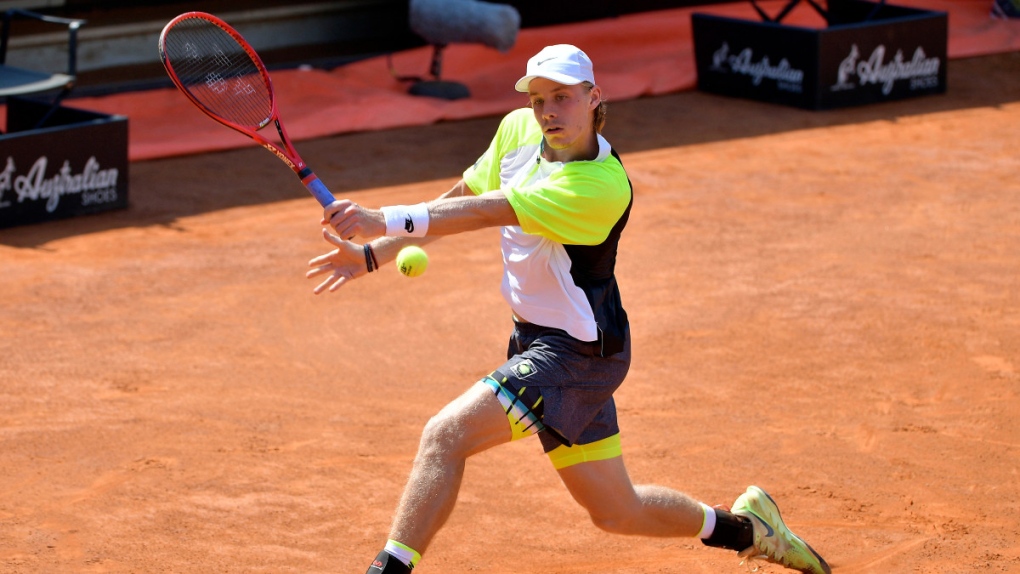 ROME -- Canada's Denis Shapovalov is through to the semifinals of the Italian Open.

The No. 12 seed from Richmond Hill, Ont., edged No. 15 seed Grigor Dimitrov 6-2, 3-6, 6-2 in the quarterfinals Saturday to notch his first career win in three matches against the Bulgarian.

"It's amazing to beat a player like Grigor," Shapovalov said. "He's someone I've looked up to since I was a junior. I'm a really big fan of his game and the way he plays. I've had some difficult matches against him.

Shapovalov, ranked No. 14 in the world, won 80 per cent of his first service points and broke Dimitrov, a former world No. 3, five times at the ATP Masters 1000 clay-court event.

The match lasted one hour, 53 minutes.

Shapovalov will play the winner of Saturday's late quarterfinal between No. 2 seed Rafael Nadal of Spain and No. 8 seed Diego Schwartzman or Argentina in the semis on Sunday.

The 21-year-old Shapovalov is looking to reach the final of a Masters 1000 tournament for the second time in his career. He lost to Novak Djokovic in the finals of the Paris Masters last November.

Shapovalov is on a roll recently. He's coming of a run to the quarterfinals at the U.S. Open.

"Definitely very happy with the result today and this week overall," Shapovalov said. "I've had a lot of difficult matches and dealing with jet lag and the body fatigue, it's not easy. I'm really happy with the way I've been able to overcome that."

Meanwhile, less than two weeks after getting defaulted from the U.S. Open, Novak Djokovic lost his cool again midway through a 6-3, 4-6, 6-3 win over German qualifier Dominik Koepfer in the quarterfinals.

When Djokovic was broken at love to even the second set at 3-3, he slammed his racket to the red clay in anger.

With the frame broken and the strings all mangled, Djokovic was forced to get a new racket and received a warning from the chair umpire.

"It's not the first nor the last racket that I'll break in my career," Djokovic said. "I've done it before and I'll probably do it again. I don't want to do it but when it comes, it happens.

"That's how, I guess, I release sometimes my anger and it's definitely not the best message out there, especially for the young tennis players looking at me, and I don't encourage that -- definitely."

The top-ranked Djokovic was thrown out of the U.S. Open for unintentionally hitting a line judge in the throat with a ball in a fit of anger.

At the Foro Italico, Djokovic had already appeared frustrated during the game before he broke his racket, glaring toward the umpire following a couple of overrules and a point that was ordered to be replayed.

"That's just me," Djokovic said. "Of course I'm not perfect and I'm doing my best."

The 97th-ranked Koepfer, who screamed at himself in frustration throughout the match, was also warned for misbehaviour early in the third set.

Aiming for his fifth title in Rome, Djokovic's semifinal opponent will be Casper Ruud, who eliminated local favourite Matteo Berrettini 4-6, 6-3, 7-6 (5) in a match that lasted 2 hours, 57 minutes.

Ruud is the first Norwegian to reach the semifinals of a Masters 1000 tournament. His father, Christian Ruud, got as far as the quarterfinals of the Monte Carlo Masters in 1997.

While fans have not been admitted to the tournament yet -- Italy's sports minister said Friday that 1,000 spectators will be allowed in for the semifinals and finals -- workers, family members and other onlookers inside the picturesque Pietrangeli stadium provided some support for Berrettini, who is from Rome.

Nicola Pietrangeli, the 1957 and 1961 Rome champion and the man the stadium is named after -- was also among those sitting on the white marble stands.

"There would have been a lot more adrenaline with fans," Berrettini said.

In the women's tournament, top-seeded Simona Halep reached the last four when Kazakh opponent Yulia Putintseva retired midway through their match due to a lower back injury.

"(Muguruza) feels really well on (the) clay court and here," Halep said. "It's a big challenge.

"I really want to win this tournament," added Halep, who will be playing her fifth semifinal in Rome. "I love playing here. ... It's one of the biggest goals now."

Halep was ahead 6-2, 2-0 when Putintseva decided she was in too much pain to continue -- having already taken an off-court medical timeout between sets.

The 30th-ranked Putintseva was coming off two long three-set matches, having upset eighth-seeded Petra Martic and 10th-seeded Elena Rybakina. Entering the match, she had been on court for 7 hours, 22 minutes -- far more than Halep, who had a bye in the opening round and won her next two matches in straight sets.

Putintseva also reached the U.S. Open quarterfinals in her previous tournament, while Halep decided to skip the event in New York due to coronavirus travel concerns.

Halep improved to 8-0 since the tennis restart and 12-0 overall stretching back to February.