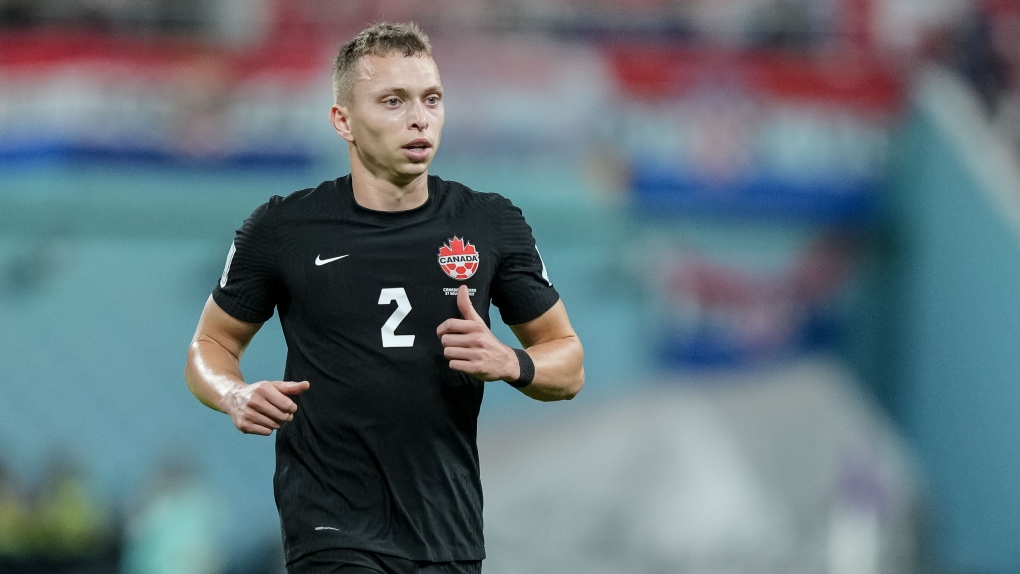 Alistair Johnston of Canada looks on during the FIFA World Cup Qatar 2022 Group F match between Croatia and Canada at Khalifa International Stadium on Nov. 27, 2022 in Doha, Qatar. (Photo by Mohammad Karamali/DeFodi Images via Getty Images)

Defender Alistair Johnston, one of Canada's standout players at the 2022 World Cup, is headed to Scotland's Glasgow Celtic.

CF Montreal confirmed the transfer Saturday, saying it will take effect Jan. 1 -- the start of the January transfer window.

Celtic said Johnston has signed a five-year contract and will meet up with the team next weekend when it returns from training camp in Portugal.

While Celtic and Montreal did not detail the transfer price, Glasgow's Daily Record reported the deal is worth around three million pounds (C $4.97 million), with Johnston getting 10 per cent.

The 24-year-old defender/wingback from Aurora, Ont., made US $445,625 with Montreal last season, according to the MLS Players Association.

Johnston was one of six Canadians to play in all three Group F matches at the World Cup.

"When a club like Celtic comes calling, it will turn any footballer's head, and especially for myself, growing up in a British household, Celtic was one of the clubs that is near and dear to our hearts," Johnston told Celtic TV. "And for me, it's one of the biggest clubs in the world.

"Just to hear that this was a club that was interested in me, and to see the project the coaching staff have and the progress that this team and this club continues to make in Europe as well, it's really exciting."

Johnston noted he has "a ton of family" in Scotland and in Ireland.

"My dad's a huge football fan, and my mum's from Northern Ireland, so there's tons of connections there, and that's also what made it a perfect fit."

Celtic currently tops the Scottish Premier League at 14-1-0. The storied club, which counts rock star Rod Stewart among its supporters, has won the Scottish league title 52 times as well as 40 Scottish Cups, 20 League Cups and the European Cup.

Johnston has started a record 31 consecutive games for Canada, erasing the record of 27 set by former Canada captain Bruce Wilson from 1984 to '86. He has won 33 caps in all, with 29 starts.

Johnston's senior debut coincided with Canada's opening World Cup qualifying match against Bermuda in March 2021. He won a second cap against the Cayman Islands before missing out on a game against Aruba in June 2021.

He was back for a match with Suriname later that month and has not missed a game since.

Montreal gave up US$1 million in general allocation money in December 2021 to get Johnston from Nashville SC, who took him 11th overall in the 2020 MLS SuperDraft out of Wake Forest.

Johnston was named Montreal's defensive player of the year.

"He's an example of the way we want a player to evolve once he joins our team; with clear ideas, while giving everything for the team," said Olivier Renard, Montreal's vice-president and chief sporting officer, in a statement. "When an opportunity with a big club such as Celtic arises, we listen to our player."

Johnston said Montreal helped him "reach new levels that I didn't even know I was capable of."

Born in Vancouver, Johnston was four when the family moved to Montreal and seven when they settled in Aurora. He was 16 when he made his debut in the Canadian youth program at an under-18 camp in 2015.

He spent his first two years of college at St. John's, where he started all 36 games as a freshman and sophomore before moving to Wake Forest, which he captained in 2019.

Johnston arrived as a central midfielder but was shifted to right back by Wake Forest coach Bobby Muuss.

"He's a student of the game, he's a soccer junkie," Muuss (pronounced Muce) said in January 2020. "He's a guy that any coach would love to have in the locker room in terms of what he brings to your team in personality, work rate, professionalism, ambition ΓÇª What he did really for the long-term culture of this group is something I'll be indebted to him for life."

In two seasons with Nashville, Johnston played 44 games, including 39 starts, with one goal and two assists.