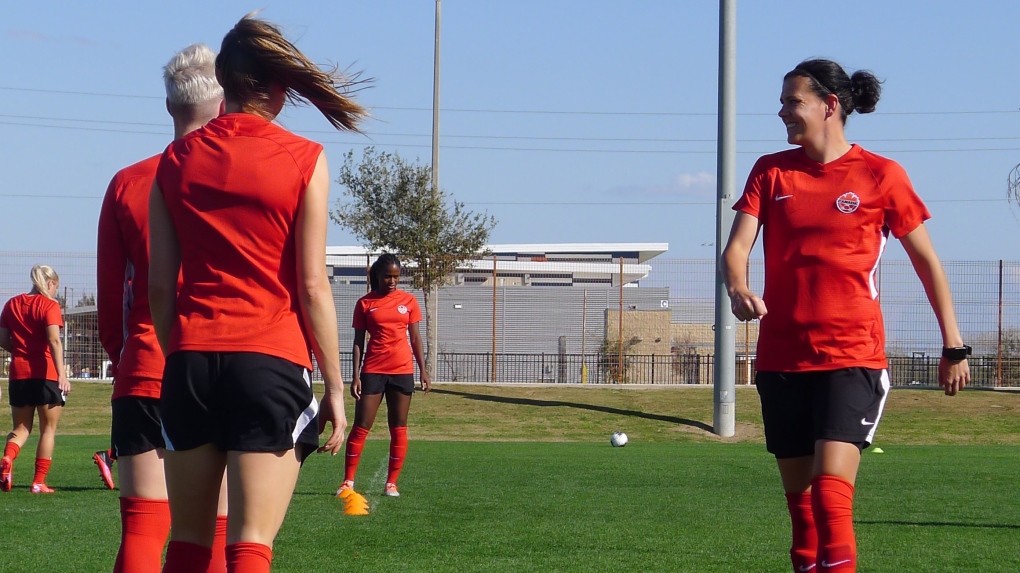 Members of Canada's women's soccer team including Christine Sinclair (right) train in Edinburg, Texas, Tuesday, Jan. 28, 2020, in advance of their match Wednesday against St.Kitts and Nevis. THE CANADIAN PRESS/Neil Davidson

EDINBURG, TEXAS -- It's a milestone game for women's soccer in St. Kitts and Nevis. For Canada, it's an opportunity to make soccer history.

There is plenty on the line Wednesday when eighth-ranked Canada meets No. 127 St. Kitts in the opening Group B match at the CONCACAF Women's Olympic Qualifying Championship at H-E-B Park in south Texas.

The Sugar Girlz from St. Kitts have never made it this far in Olympic qualifying.

But all eyes will be on Christine Sinclair. The Canadian captain's next goal will be No. 184, tying retired American striker Abby Wambach's world record.

Not one to bang her own drum, Sinclair has other things on her mind than the goals chase and says her teammates have pretty much kept the topic under wraps.

"They've done a pretty good job of keeping it pretty quiet," Sinclair said after training Tuesday. "Today was the most that it's probably been built up.

"To be honest, they're probably looking forward to it more than I am. I know how important this tournament is and how important the games are as we move on. Obviously I'd like to get it over with -- in a positive way," she added. "Just because I don't want it to be a focus for the team in the coming weeks."

Canadian forward Janine Beckie says she has never met anyone as humble as Sinclair.

"I think it actually makes her upset to talk about it," she said of the record. "So I think for her she'll be grateful that the chase is over and that will take a little bit of pressure off of her. Hopefully that happens sooner rather than later."

Wednesday marks 7,260 days since Sinclair opened her scoring account for Canada, beating star goalkeeper Bente Nordby in a 2-1 loss to Norway at the 2000 Algarve Cup in Portugal. Sinclair was 16, making her second senior appearance.

With Canada facing St. Kitts and Nevis, No. 26 Mexico and No. 51 Jamaica in group play at the eight-country tournament, Sinclair should get looks at goal. While Canada has never faced St. Kitts, Sinclair already has scored 11 goals against Jamaica and 16 against Mexico.

If she scores, St. Kitts will become her 41st international victim.

"It's an honour to be on the field with her," said Jene Baclawski, St. Kitts' part-time coach.

"If we could put all 11 (players) on Christine Sinclair, I think we would. But I don't think that' going to work out for us," the American added dryly. "We certainly hope that she breaks the record but maybe not against St. Kitts and Nevis."

St. Kitts, its lineup featuring a half-dozen Canadian-based players, has never made it to this tournament before.

"It's a big game," Baclawski said of facing Canada. "I would be remiss if I didn't say it was probably the biggest game so far in the federation (history) for St. Kitts and Nevis for the women's team.

St. Kitts went 3-0-1 in outscoring host Trinidad and Tobago, the Dominican Republic, Antigua and Barbuda, and Guyana 20-2 in Caribbean qualifying.

"It might sound really cliche but we don't have anything to lose," said Baclawski.

The top-ranked Americans are in the other group in Houston, alongside No. 37 Costa Rica, No. 53 Panama and No. 68 Haiti.

The top two teams from each pool advance to the semifinals in Carson, Calif., with the semifinal winners advancing to the Tokyo Olympics. The Canadian women are coming off back-to-back bronze medals at the 2012 and 2016 Games in London and Rio.

Canada is 7-0-0 all-time against Jamaica, holding a 48-1 edge in scoring. The Canadian women are 21-1-1 against Mexico and are unbeaten in 13 matches.

The lone loss was a costly one, however. The 2-1 defeat by Mexico in 2004 prevented Canada from attending the 2004 Athens Games.

Throughout her career, Sinclair has amassed her goal total by simply putting the ball where the goalkeeper isn't.

Said Beckie: "She doesn't do anything outrageous. Like she's not the kind of player that flicks the ball over her head, juggles it five times and hits it upper 90 (top left or right of the goal). There are those kind of players but they are up and down players. She's the most consistent strikers I've ever played with because she's one of the most simple that I've ever seen. She does all the fundamental things to the best of her ability. And that's one of those things -- having the presence and the composure inside an area where it can be the most chaotic part of the field most times."

"You don't really notice her too much until she puts it in the back of the net," said Canada coach Kenneth Heiner-Moller. "But if you go to some of our sessions, you can see how hard she is working to be that unnoticeable player that puts a shift in, then all of a sudden turns up in the penalty area."

Heiner-Moller says his skipper also drives the rest of the team, with 55 assists to her credit.

"If I score, I score. If I don't, it means someone else is which makes me happy too," Sinclair once said.

Heiner-Moller says consistency is his team's goal at this Olympic qualifier.

"No matter who we play, we need to play to Canadian standards. If we play St. Kitts in the first match, if we play the U.S. at some point during this tournament, it has to be our level of performance that we play to," he said prior to the tournament.

"It's so easy to play teams that you're better than and then you drop to their level. You play what you have to and not what you can."

The Canadian women are looking for a fresh start after a stale end to 2019, seemingly still feeling a hangover from a disappointing round-of-16 exit at the hands of Sweden in last summer's World Cup.

Canada suffered back-to-back 4-0 losses in Asia against Japan and Brazil in October and November, respectively, before bouncing back to beat New Zealand 3-0 in China three days after the Brazil loss.

Heiner-Moller was "furious" after the Japan defeat in Canada's first outing since the World Cup in France.

"That was an attitude thing," he said at the time. "It was World Cup blues. That was unacceptable. We can never show up and just expect things to happen. We need to fight for every single inch of the pitch and believe in the concepts and all that stuff."

Sinclair scored goal No. 183 last time out in the Nov. 10 win over New Zealand.

Canada has finished runner-up to the U.S. at the last three CONCACAF Olympic qualifying tournaments.