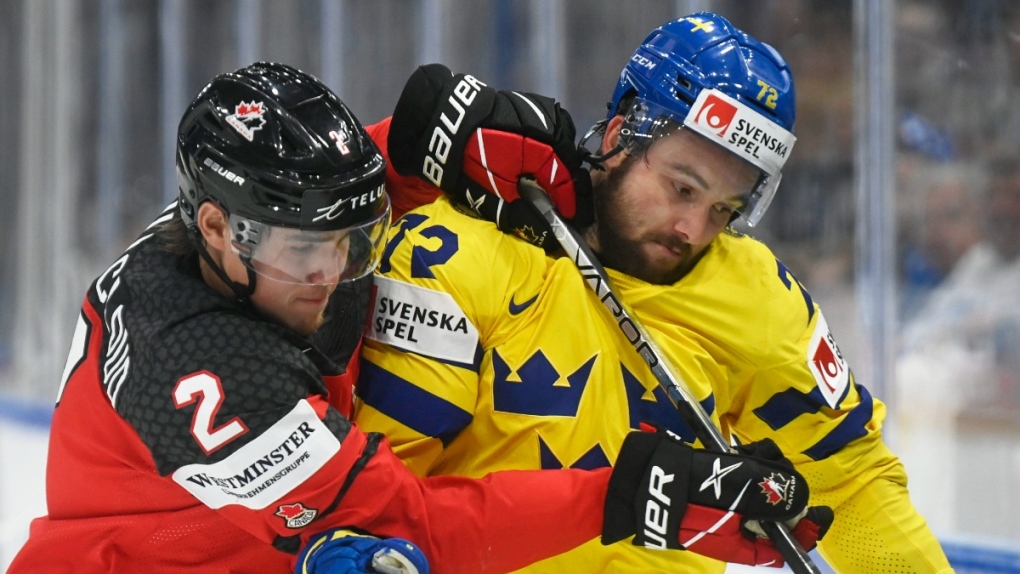 Emil Bemstrom of Sweden is challenged by Zach Wihtecloud of Canada, left, during the Hockey World Championship quarterfinal match, on May 26, 2022. (Vesa Moilanen / Lehtikuva via AP)
TAMPERE, Finland -

Drake Batherson scored 43 seconds into overtime, powering Canada to a 4-3 comeback victory over Sweden in the quarterfinals at the world hockey championship Thursday.

Sweden jumped out to 3-0 lead midway through the second period with goals from Carl Klingberg, William Nylander and Max Friberg.

Ryan Graves sparked Canada's comeback with a goal 1:21 into the third, and Pierre-Luc Dubois and Matt Barzal -- playing on his 25th birthday -- scored 30 seconds apart later in the period to force extra time.

Nylander was called for tripping 25 seconds into overtime and Canada was quick to capitalize on the man advantage, with Batherson sending a sharp-angle shot in behind Swedish goaltender Linus Ullmark from the bottom of the faceoff circle.

Barzal and Dubois both assisted on the game-winning goal.

Chris Driedger stopped 16-of-19 shots for Canada and Ullmark made 38 saves for Sweden.

Canada will face the winner of a quarterfinal matchup between Switzerland and the United States in the semifinals on Saturday. The medal games are set to be played on Sunday.

This report by The Canadian Press was first published May 26, 2022