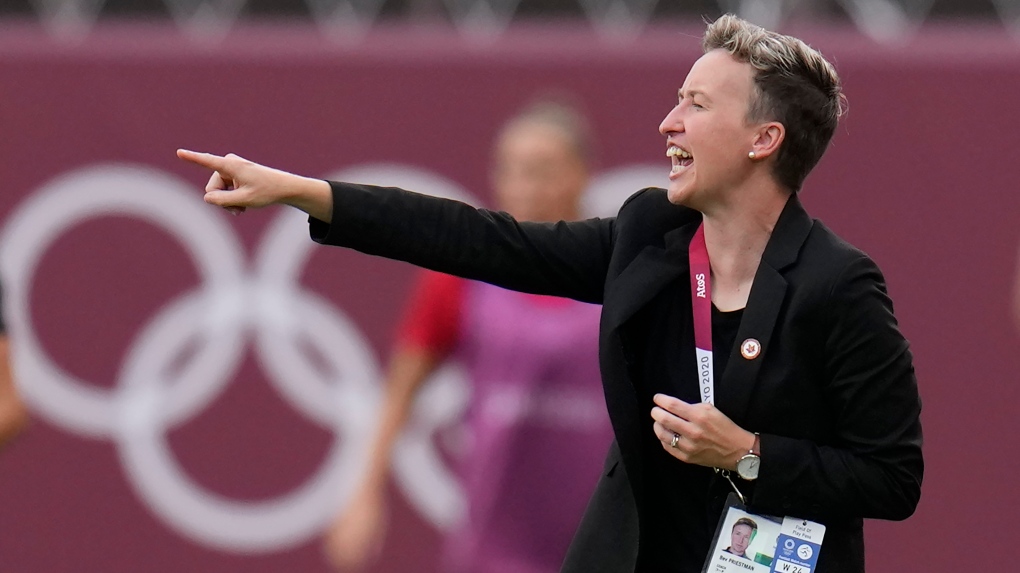 Fresh from a 5-1 win over New Zealand on Saturday in Ottawa, Canadian women's soccer coach Bev Priestman is clear on what she expects from Tuesday's rematch with the Football Ferns in Montreal.

"More of the same," Priestman said.

"The group has committed to keep pushing, keep scoring more goals. We know that's what we're going to need to do to go and be successful at a World Cup. So I'm expecting more of the same."

After using 18 players in the first game of the so-called "Celebration Tour" marking Canada's gold-medal performance this summer in Tokyo, Priestman says she will ring in some changes to Tuesday's lineup at Saputo Stadium to showcase those "who deserve to play based on their contribution to the Olympics."

"It's a great opportunity for players to put their best foot forward, moving forward. And we just want to put on a great show for the fans like we did in Ottawa," Priestman said in a short virtual availability Monday. "It was a really special start to the tour and I'm excited to see the fans in Montreal."

Priestman, who made her home coaching debut with Canada on the weekend at TD Place, says she is trying to strike a balance between "where we're at now (and) where we want to head."

"Every player played a part in that Olympics, all 22 of them -- whether they were up in the stands, down on the pitch. And I must say the attitude and application of the players -- yes, it's a celebration tour -- but from the minute they got on the pitch on Day 1, you could see they're motivated towards this next journey."

Priestman summoned the entire Olympic squad, currently ranked sixth in the world, plus four others for the two matches against No. 23 New Zealand. Star fullback Ashley Lawrence was unable to join the team through injury, staying in Europe with her Paris Saint-Germain club team.

That opened the door for Priestman to deploy forward Janine Beckie at right back, a position she has played for Manchester City.

"I thought she was phenomenal. I think she was involved in all five goals," said Priestman.

Priestman expects pushback and a "difficult game" from New Zealand in the wake of the lopsided loss.

The 38-year-old McLeod, who fought her way back through injury to return to the national team, has won 118 caps for Canada. Priestman said McLeod has played a key role in helping young players on the squad.

"Erin was the only (Canadian) player in the Olympics who did not get on that pitch, yet she was pivotal in helping us get the gold," said Priestman.

The game in Ottawa was the first at home for the Canadian women since May 18, 2019, when they blanked Mexico 3-0 at BMO Field in Toronto in a warmup match ahead of the 2019 World Cup in France. They played 29 straight matches after that away from home.

"I know for the players something felt different," said Priestman. "The fans, they love this team and we absolutely felt that. I spoke to a couple of players after the game and they said there's something different about playing at home and what that gives you as a player and to feel the love from the fans. And those fans can say there were part of the gold moment for this team."

Canada's next official matches will be in July at the 2022 CONCACAF W Championship.