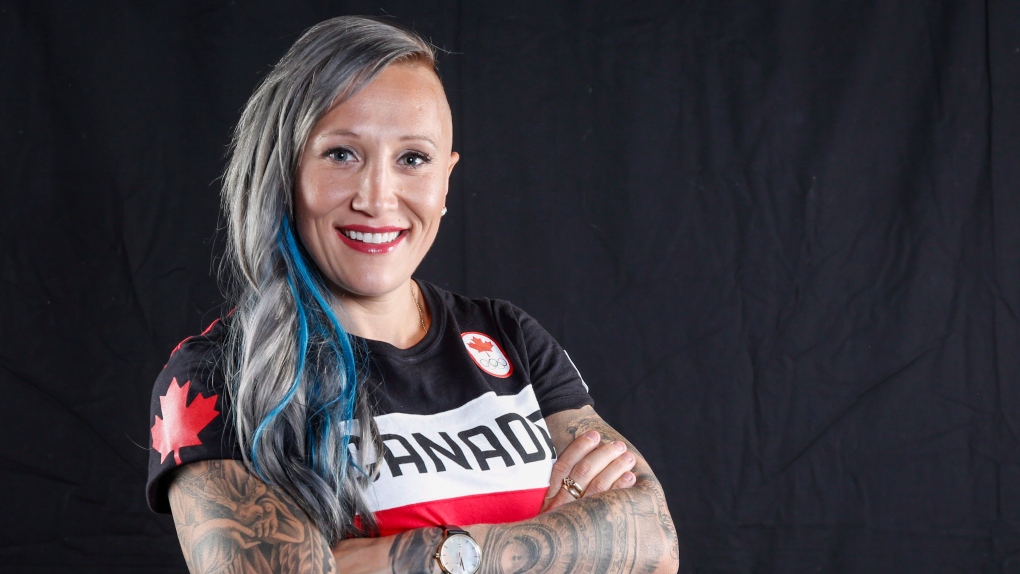 Canadian Olympic athlete Kaillie Humphries poses for a photo at the Olympic Summit in Calgary on Saturday, June 3, 2017. THE CANADIAN PRESS/Jeff McIntosh

Canada's ambition "to contend for No. 1" at the Pyeongchang Olympics is a shift from the two previous Winter Games, where the publicly stated goal by the country's top sport officials was to finish first in the race for the most medals.

"As an athlete, I never really appreciated people who weren't really part of my team telling me how many medals I was going to win," said Canadian Olympic Committee president Tricia Smith, a silver medallist in rowing in 1984.

"Contending for No. 1 is what we do as athletes. It makes sense for us as an organization."

Heading into Pyeongchang with a broader target that is easier to hit, Canada's team certainly has the depth of talent and experience to both battle for the top of the medal table and win more Winter Games medals than ever before.

"We head into the games probably with our strongest team ever," Own The Podium chief executive officer Anne Merklinger said.

Germany is on a mission, however, with its athletes gobbling up world championship and World Cup medals. Canada is tracking to duke it out with the U.S. and Norway for second in the overall count.

With 26 medals from the most recent world championships in each winter sport, Canada ranks second behind Germany (34) and is one up on the Americans, according to Own The Podium.

After running a distant second behind Germany in medals won for much of this World Cup season, Canada is tied for third with the U.S. at 116 behind Germany (188) and Norway (127) heading into the Feb. 9-25 Olympics.

Canada collected a high of 26 medals in the 2010 Winter Games in Vancouver to finish third, but the host country won more gold than any other country with 14.

Host Russia's tumble from top spot in 2014 for doping violations combined with Canada due for an upgrade to a bronze in the luge relay would give Canada 10 gold, 10 silver and six bronze in Sochi -- tied for second with Norway behind the U.S. (28).

After Sochi, the advent of analytics, an increase in funding for young "NextGen" athletes, an improved capacity to prevent and treat injuries and the retention of quality coaches has positioned Canada for a strong 2018, according to Merklinger.

It was difficult to draw a straight line between the suspension of some Russian athletes from the 2016 Summer Games in Rio to Canada's 22 medals there.

"We're strong regardless of whether the Russians are there or not," Merklinger said.

Russian athletes deemed clean will be allowed to compete under the clunky moniker "Olympic Athletes from Russia" or OAR.

They'll wear neutral, not Russian, colours. Gold medallists will hear the Olympic anthem and not that of their country. Russia currently ranks fifth in World Cup medals this winter at 95.

"If they're not fielding their quote-unquote best team because they're involved in doping scandals, I don't feel that bad for them," said four-time Olympic cross-country skier Devon Kershaw from Sudbury, Ont.

No NHL players in the men's hockey tournament is a throwback to 1994 when Canada lost the gold in a shootout to Sweden. Every country scoured other pro leagues to pull together competitive teams.

Montreal snowboarder Jasey-Jay Anderson, 42, will be the first Canadian to compete in six Winter Games. He won parallel giant slalom gold in 2010.

Of the new events making their Olympic debut in Pyeongchang, it would be a surprise if a Canadian wasn't on the podium in big air snowboarding and the mass start in long-track speedskating. Canada is also a contender in mixed doubles curling and mixed team alpine skiing.

Own The Podium makes funding recommendations directing roughly $24 million of it annually to winter sport federations based on medal potential, and also to sport institutes across the country.

The COC prepares athletes for the Olympic Games environment, looks after their needs on the ground and pays for it via corporate sponsorships.

COC chief executive officer Chris Overholt said in 2016 that $105 million had been raised in sponsorship over a four-year period.

Doping and corruption scandals have laid a beating on the Olympic brand to the point where cities are not lining up to host them anymore.

The IOC has overhauled bid and hosting procedures to encourage cities to bid for games. Calgary is currently mulling a pitch for 2026.

"Olympic values are consistent with performance," Smith said. "Performance is all about values.

"You've had integrity in terms of your training, you have respect for your fellow athletes."