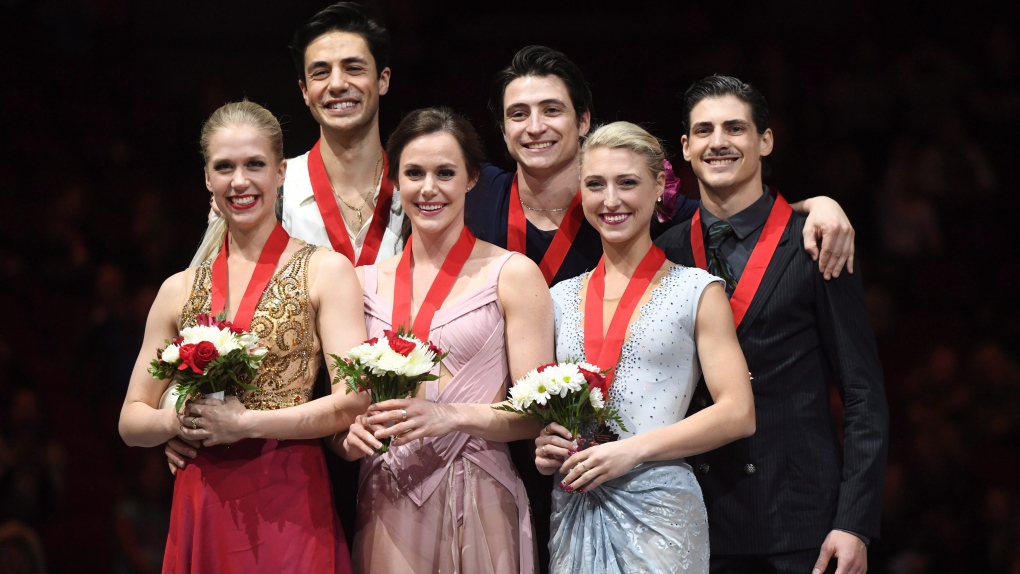 OTTAWA -- Canada's team for the world figure championships boasts 17 world medals between them.

With the return of ice dancers Tessa Virtue and Scott Moir, along with Patrick Chan and pairs skaters Meagan Duhamel and Eric Radford, Canada will send one of its strongest teams ever to the world championships in Helsinki in March.

The team was named Sunday after the Canadian figure skating championships.

"It was a great week," said Skate Canada's high performance director Mike Slipchuk. "When it came time to select the team, it was pretty clear. It was nice to see our defending champions skate the way they did."

Chan, a three-time world champion, and Kevin Reynolds of Coquitlam, B.C., were named to the team in men's singles. The announcement came a day after Chan won his ninth national title.

Kaetlyn Osmond of Marystown, N.L., and Gabrielle Daleman of Newmarket, Ont., will compete in women's singles.

Virtue and Moir, who are two-time world champions and six-time medallists, plus double world medallists Kaitlyn Weaver and Andrew Poje of Waterloo, Ont., as well as Piper Gilles and Paul Poirier of Unionville, Ont., will represent Canada in ice dance.

And two-time world champions Duhamel and Radford lead a trio of pairs teams that include Toronto's Lubov Ilyushechkina and Dylan Moscovitch as well as Julianne Seguin of Longueuil, Que., and Charlie Bilodeau of Trois-Pistoles, Que.

Seguin and Bilodeau were unable to compete in Canada's national championships this weekend as she recovers from a concussion.

"By all accounts from the doctors, they'll be fine," Slipchuk said. "If this championship had been one week later, they probably would have been here. They're our second-highest team all season and it was a very clear choice for us."

The world championships are even more important this season because they determine how many skaters a country can enter in next year's Pyeongchang Olympics. The total number of placings in each discipline must total 13 or less to have the maximum three entries. (So if Chan were to win bronze, and Reynolds finished ninth, Canada would have three entries in men's singles in the Olympics.)

"We look at everything from the season, Canadian (championships) is one of the five or six checkpoints that we look at," Slipchuk said, when asked about the selection process, particularly in regard to the pairs. "Our plan is we need to put ourselves in the best position and give everyone the best opportunity to get to these championships."

Virtue and Moir captured their seventh national title this week and showed they're even stronger than they were before their two-year hiatus from competing.

"I'll be honest, after going through Patrick's return a year ago, and seeing kind of how tough it is, I think we learned a lesson from him coming back that you've got to be ready, and you've got to do everything,. Which he did. And it's the same with Tessa and Scott," Slipchuk said. "You've got to dive in two feet, two hands.

"Would I have thought they'd be where they are now? I didn't, but every time out they just keep getting better and stronger. They've gone head to head with the world champions twice . . .Two years away gives you some time to reflect and they've come back better than ever."

Chan, who took a season off after Sochi, laid down arguably his strongest performance of his comeback with his free skate Saturday night, landing both a quad toe-loop and quad Salchow.

"A year ago, he had one triple Axel, two quads. And here he is with two triple Axels, three quads," Slipchuk said. "To get two different quads in is important for him because it shows him, it shows the field that he has more arsenal. You need to have that if you're going to compete with these young guys that are jumping quads all over.

"If he performs the technical aspects as laid out, and backs it up with his second mark (artistic element) that he does so well, he's hard to beat."

The world figure skating championships are March 29 to April 2.