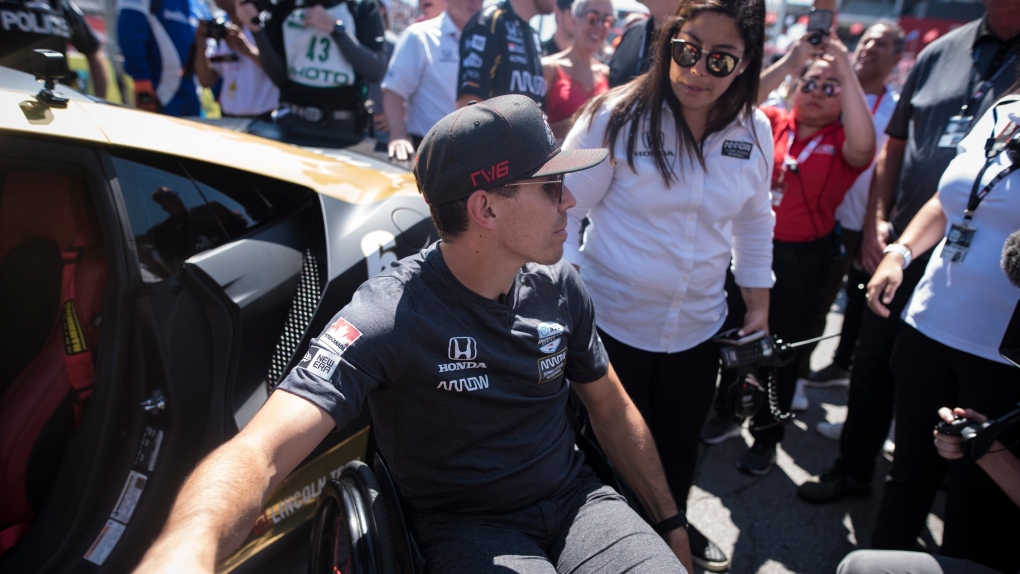 Injured driver Robert Wickens of Canada is photographed before leading the parade lap in a car fitted with hand controls before the 2019 Honda Indy Toronto race in Toronto, Sunday July 14, 2019. THE CANADIAN PRESS/ Tijana Martin

TORONTO -- Canada's Robert Wickens made an emotional return to IndyCar racing on Sunday.

Almost a year after a horrific crash left Wickens a paraplegic, the 30-year-old from Guelph, Ont., led the warm-up lap for Honda Indy Toronto in an Acura NSX that's been modified with hand controls.

"Honestly I'm just over the moon with how crazy this is . . . this is just incredible," Wickens told NBC before getting into his car. "It's going to feel like I won the race."

A huge roar erupted from the Exhibition Place crowd as Wickens, with his fiancee Karli Woods in the passenger seat, took off. Woods stifled several screams while the duo tore around the track.

Canadian James Hinchcliffe, who finished sixth in Sunday's race, said he could hear the crowd's reaction from his car while waiting to start.

"It was awesome to see him back on track and in front of home crowd and awesome to see the support that he had," the Oakville, Ont., native and fellow Arrow Schmidt Peterson driver said.

Wickens had joked that how fast he would go would be dictated by "Karli's screaming" and how her stomach was handling the speed.

"Hopefully we can give it a good run, and enjoy the moment. We've been through so much together," Wickens said.

Wickens also gave the start command, saying: "Future drivers of mine, start your engines!" -- a nod to perhaps owning his own team one day.

Hinchcliffe said he didn't find it difficult to refocus for the race after Wickens' lap.

"It's sort of the nature of our sport," he said. "Obviously it's not every day that something quite that cool happens right before you get in the race car (but) we're shaking hands with sponsors, taking pictures with fans up to the minute you put your helmet on. ... I think, if anything, it certainly lifted me up and I think it lifted every driver on the grid up because we were all so happy to see it happen."

Wickens was having one of the most dominant rookie seasons in IndyCar history, reeling off seven top-five finishes including a thrilling third place in Toronto at this time last year before he crashed at Pocono Raceway on Aug. 19.

Wickens was travelling around 184 m.p.h and trying to pass Ryan Hunter-Reay when the two cars slightly touched. Hunter-Reay's car careened into the wall. Wickens' car soared over Hunter-Reay's and into the fence, spinning around like top as it exploded into pieces, leaving just the tub that came to rest on the track.

Scott Dixon called Wickens' recovery to date "impressive" while Alexander Rossi said watching him drive around on the track "put a smile on my face."

"So proud of him," said Rossi, the third-place finisher. "The fact that he's back here in a car, less than a year from his incident, in his hometown of Toronto, at the race he fell in love with as a kid. Amazing to see him be able to do that."

"The effort the guy is putting in is unbelievable," added Dixon, who finished second Sunday. "Six to eight hours a day he's been working. He's definitely giving it everything."