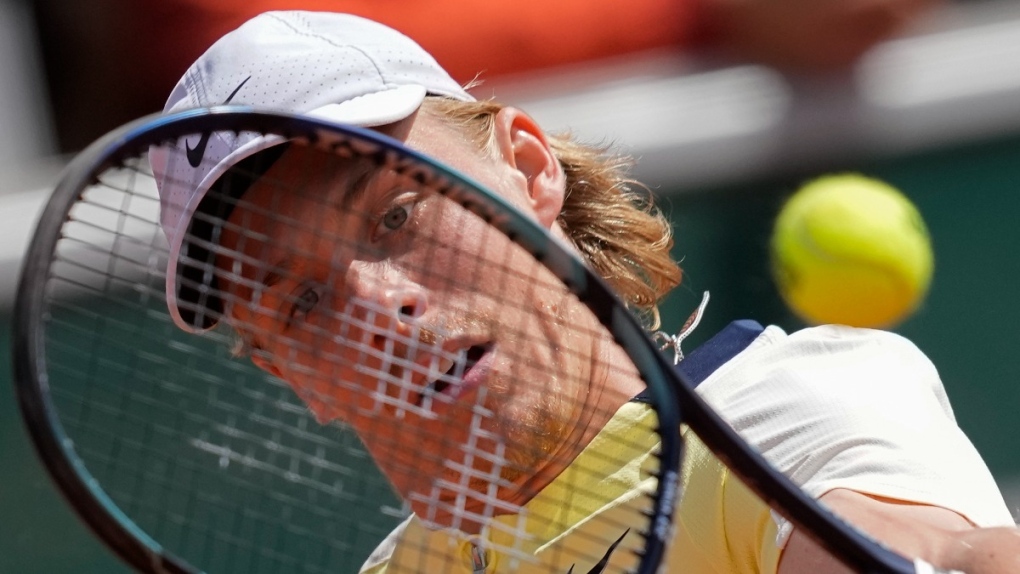 Denis Shapovalov plays a shot against Holger Rune during their first round match at the French Open in Paris, France, on May 24, 2022. (Christophe Ena / AP)
PARIS -

Canada's Denis Shapovalov has been bounced from the French Open.

Shapovalov was the 14th seed headed into the clay-court event and Rune was unseeded.

It was the first time the 23-year-old Shapovalov played the 19-year-old Rune, who is ranked 40th in the world.

"It was difficult. For sure I wasn't able to bring out my best performance. It's definitely frustrating," Shapovalov said. "But yeah, it just shows I have a lot to work on. And just excited to get back to work. Never think I'm done learning and improving. So, yeah, it's difficult moment, but I just keep working."

Shapovalov had six aces to Rune's none in the match Tuesday, but the teenager was dominant in virtually all other categories.

Rune had a better win percentages on first and second serve, he took five of nine break points, and won 64 service points to Shapovalov's 46.

Shapovalov committed 53 unforced errors to Rune's 19, and the Canadian's six aces were cancelled out by six double faults.

Shapovalov fought back in the third set to force a tiebreaker but fell behind 3-1 and couldn't recover, sending a forehand wide on match point.

Rune, a rising star on the ATP tour, won the BMW Open this month and was a semifinalist in Lyon last week.

"This is what you work for every day to be able to play the biggest tournaments. And to play these kind of players like Denis also is great for me. It's amazing level. I'm super happy and pleased to be in this position right now," said Rune. "To be able to have chances against these guys, to be able to, you know, win my first title in Munich was a huge step forward in my career. I'm really positive and working hard every day to get better."

The Dane defeated world No. 3 Alexander Zverev en route to his first tour title in Munich.

Three Canadians are still competing at the French Open and will see action in Round 2 on Wednesday.

With files from the Associated Press. This report by The Canadian Press was first published May 24, 2022