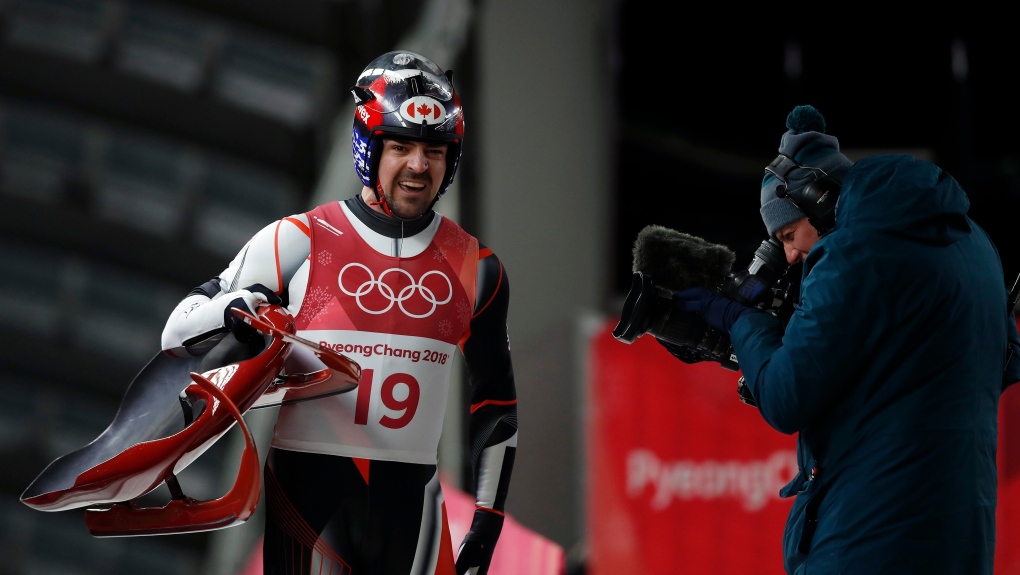 Sam Edney of Canada smiles in the finish area after the third run during final heats of the men's luge competition at the 2018 Winter Olympics in Pyeongchang, South Korea, Sunday, Feb. 11, 2018. (AP Photo/Andy Wong)

PYEONGCHANG, Korea, Republic Of -- Asked to reflect on his career, Sam Edney's eyes started to water before a tear rolled down his left cheek.

The Canadian luger, a man who has dedicated half his life to the sport, had just finished his final men's singles race -- a sixth-place finish at the Pyeongchang Winter Olympics.

"I'm really proud of the steps that I've made and the program's made," said Edney, his voice beginning to crack. "It's been a really amazing experience."

The Calgary slider clocked a cumulative four-run time of three minutes 11.021 seconds to post the best-ever Olympic result for a Canadian male in his fourth and final Games.

And yet there was a tinge of disappointment with the knowledge a podium spot had been there for the taking on an Olympic Sliding Centre track that proved to be the great equalizer in a sport where margins are razor-thin.

Edney was fifth after Saturday's first two runs, but had a difficult start to his third on Sunday -- a mistake that cost him a realistic shot at Canada's first Olympic medal in luge.

"That was the moment that I put myself behind the 8-ball," said the 33-year-old. "Now I'm just really trying to enjoy what I have.

"Sixth place at the Olympics is still something to be really proud of, it's just not exactly what I was hoping for."

Felix Loch -- the two-time defending Olympic champion -- led after each of the first three runs, but the German fell to fifth after a rough final time down the track.

"I feel for Felix," said Edney, who will take part in Thursday's team relay to cap his competitive career. "That's a really tough hit for him to take. He's a great slider and a great champion."

Edney sat sixth after clocking in at 47.759 seconds in his third trip down the track before racing to a 47.645 on his final run as snow began to fall on a frigid night where the temperature plummeted as low as -22 C with the wind chill.

"It's something I'm still trying to kind of put words to," said Edney of his final singles race. "You knew (the winner) was going to be whoever could put down four consistent runs, and look at who stands on the top of the podium -- a guy that deserves that because he did that."

Edney's best singles performance at a Games prior to Sunday was his seventh-place showing at Vancouver 2010.

"It's very unfortunate that he's that old and has to leave us now and go into the real world," quipped always-colourful Canadian luge coach Wolfgang Staudinger. "He's an awesome guy."

Edney was 11th in the men's race four years ago in Sochi, Russia, and also wound up a frustrating fourth in the relay with women's luger Alex Gough and doubles sliders Tristan Walker and Justin Snith.

The Canadians were upgraded to bronze -- what would have been Canada's first-ever Olympic luge podium finish -- in December after a pair of Russian competitors were among 40 athletes from that country stripped of their 2014 results and handed lifetime bans by the International Olympic Committee for alleged doping violations.

But the Court of Arbitration for Sport overturned that punishment for 28 of those athletes, including lugers Albert Demchenko and Tatiana Ivanova, citing insufficient evidence.

Edney became the first Canadian male to win a World Cup medal when he took gold at a race in Calgary in 2014.

He was also the country's first male singles luger to step on a World Cup podium outside Canada when he earned a bronze at the Pyeongchang test event last February.

Edney then took silver in another race on his home track in December for his best finish of 2017-18 season.

Gough was fourth in Sochi, while Walker and Snith were also just off the podium before the Canadian quartet finished fourth in that controversial relay.

Women's luge in Pyeongchang goes Monday and Tuesday, doubles is slated for Wednesday, and the relay is set for Thursday.

Staudinger said the fact that the track is relatively new could bode well for the Canadians to finally grab their first medal.

"I have absolute confidence," said the German. "You've seen today how selective this Curve 9, 10, 11, 12 section is. The best in the world have real hard time to put in four runs.

"If we have four clean runs and four decent starts we can be heroes, but I also know you can walk away from here with tears in your eyes not having done much wrong."