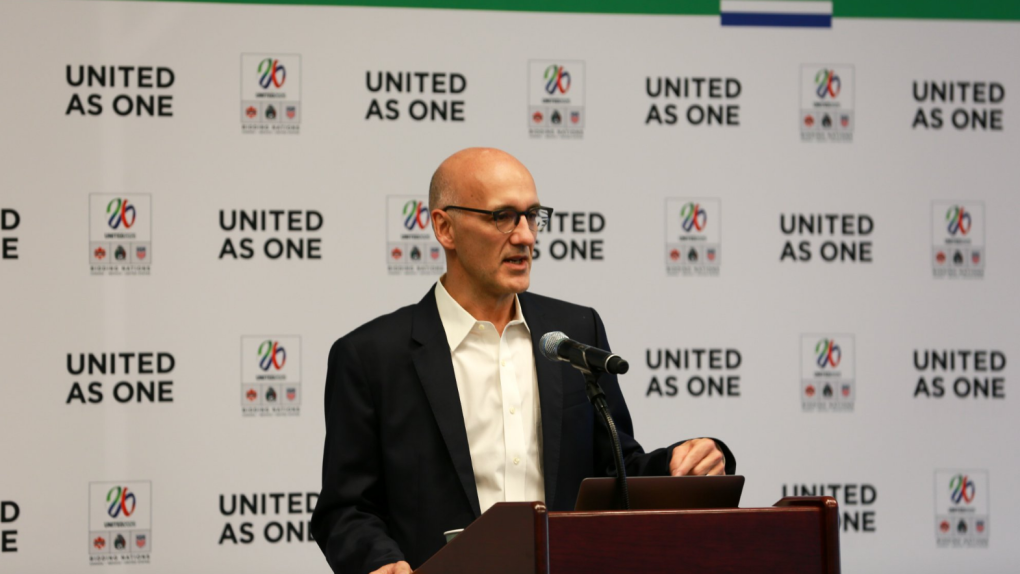 TORONTO -- Canada Soccer has a message for fans bemoaning the small number of games that would be played north of the border as part of the 2026 World Cup.

Canada's 10 games are "icing on the cake," said Peter Montopoli, Canada's bid director for the 2026 World Cup bid. And if not for a joint bid, Canada would stand little chance of hosting at all.

Branded "United 2026," Canada, the United States and Mexico are competing against Morocco to host the World Cup that year, and on Saturday, representatives from the three countries updated the media on their progress.

Canada and Mexico will get 10 games apiece, while the United States will host the other 60, a decision based largely on infrastructure, said Sunil Gulati, the chair of the United 2026 board.

"The joint bid is much more compelling than if any one country tried to do it on their own," said Canada Soccer president Steven Reed. "The fact that we're getting 10 matches out of the 80 I think is really exciting for Canadians across the country. The reality is we would have been hard-pressed to go it alone with a 48-country competition, so I think we should be really pleased."

Canada's participation is as much about the buildup to the World Cup, said Montopoli, drawing comparisons to the development of the women's in this country since Canada was awarded the 2015 FIFA Women's World Cup.

"It's about the eight-year runway that we could use to develop the game, develop the men's game, align the men's game, training fields, hosting international matches, there's a whole assortment of things we can do," Montopoli said. "We know how to do that, we've done that for the women's game, that was the runway we had up until 2015. We aligned a complete program, we have our players playing in top leagues around the world, producing some of the best players. We think we can do that on the men's side, but we need an eight-year runway.

Including the 2015 women's event, the three countries have hosted 13 FIFA events between them. Mexico has hosted two World Cups, and the 1994 World Cup in the United States remains the most attended tournament in FIFA's history.

"We believe that between the size of the stadiums which obviously impacts attendance, the level of hospitality available, which affects revenue, and the commercial opportunities that are available to FIFA, this will be by far the most successful financial World Cup," said Sunil Gulati, president of the U.S. Soccer Federation. "It's probably a pretty good time for that to happen for FIFA."

Gulati added that, considering the current political climate in North America, the joint bid comes at an important time.

"There's some ongoing discussions that everyone is familiar with about that," he added, in reference to NAFTA. "So the message that hopefully this sends about relationships and international relationships is extraordinarily important."

The United 2026 presentation came the morning of Toronto hosting the MLS Cup Final between TFC and the Seattle Sounders, and included a glitzy video that spoke of the "biggest pilgrimage of sports fans on earth."

There were some humorous moments. Gulati talked about the good-natured negotiations between the three countries and recounted an informal conversation with someone from Televisa, which owns Mexico's Estadio Azteca. The Televisa individual wanted a guarantee Azteca would host the opening game, to which Gulati responded that he couldn't guarantee that.

"I said 'I'll tell you what, why don't we (the U.S.) pull out, you and Canada do it. But you can't use American air space during the event,"' Gulati said, to much laughter.

Toronto, Montreal, Edmonton and Vancouver are Canada's candidate host cities. The bid will be submitted to FIFA on March 16, 2018, and bid winner will be announced at the FIFA Congress in Moscow on June 13, 2018.

Watch @johnkristick, Executive Director of the #united2026 bid, discuss the growth of soccer in North America and what bringing the 2026 FIFA World Cupᵀᴹ to Canada, Mexico and the USA would mean to the future of the game. #UnitedAsOne https://t.co/mWmlf7FIhW