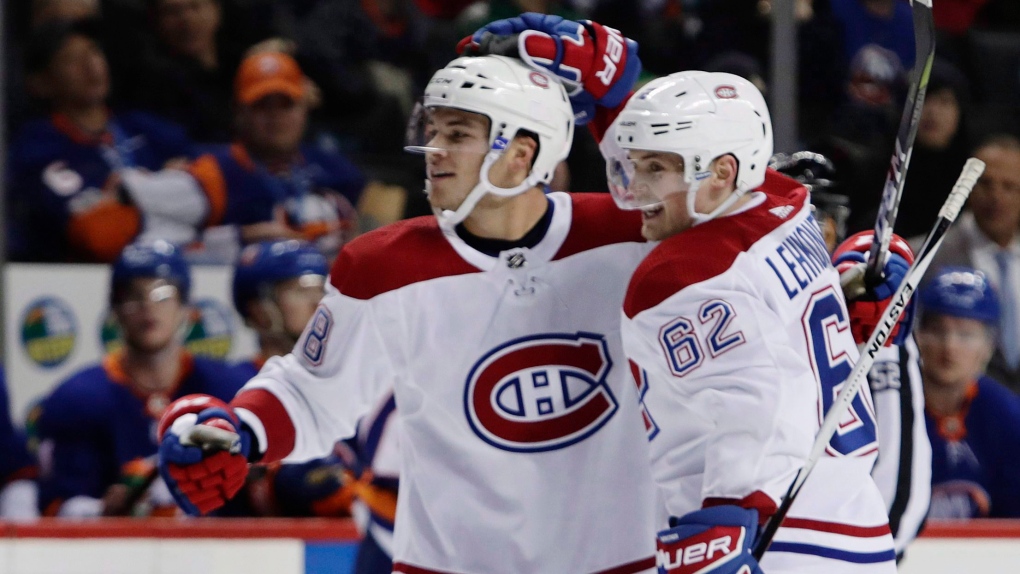 Montreal Canadiens' Artturi Lehkonen, right, celebrates with Noah Juulsen after Juulsen scored a goal during the third period of an NHL hockey game against the New York Islanders on Friday, March 2, 2018, in New York. THE CANADIAN PRESS/AP-Frank Franklin II

Canada's NHL teams have offered season-ticket holders rebate or refund options in acknowledgment that no more 2019-20 regular-season games will be played in front of fans in their respective buildings.

In a four-day span May 13-16, all seven teams contacted their season-ticket bases with options and, in some cases, deadlines to make a decision.

"It has become increasingly apparent, that any possibility will not include any further games being played this season in front of fans at Bell MTS Place," the Winnipeg Jets said in an email.

That admission may seem anticlimactic given leagues and teams around the world are either playing in empty stadiums, or trying to figure out a way to do that during the COVID-19 pandemic.

But season-ticket money is foundational to an NHL team's business. Clubs are loathe to part with it.

It's often paid, or partially paid, in advance.

Canadian teams are offering refunds, but are also pushing a number of incentives to let them keep the money.

Toronto Maple Leafs season-ticket holders had to declare they wanted their money back by Victoria Day or a credit would be applied to their accounts.

Their Montreal Canadiens counterparts had to make a decision by Friday, while the Vancouver Canucks' deadline is on June 3.

The Edmonton Oilers and Leafs had seven left, the Canucks six, the Ottawa Senators, Habs and Jets four.

A look at what Canada's NHL teams are offering based on emails sent to season-ticket holders.

The two credit options are: receive a food and beverage voucher worth five per cent of the credit, or get three per cent interest on the value of the credit starting April 1 "until the date the 2020-21 regular season schedule is announced."

Those who didn't request a refund by May 18 had their credit applied to next season. The first instalment on 2020-21 season tickets was delayed from April 8 to June 8, with the option of applying the credit to it.

Incentives to not ask for your money back are doubling your Rogers Arena food and beverage allowance to $400, no increase in price on 2020-21 season tickets, the credit serving as a down payment on next season, payment flexibility and no payment plan fees. A decision on credit or refund is open until June 3, after which a credit will be applied to next season.

Taking the credit increases it by half its value -- $400 owed makes it $600 for example -- and freezes the price on renewing at 2019-20 levels. Habs season-seat owners were also offered flexible payment options, but had to decide on credit or refund by Friday.

The Sens are expected to launch their renewal campaign Monday, but offered a season-ticker holder 25 per cent off next season's package back in March. In a May 16 email, owner Eugene Melnyk wrote "you will not lose the value of the tickets you have purchased. We have received your request for a refund, and are working to process your request as quickly as we can."

The Jets will discount next season's renewal by three per cent of the credit balance, accrued from March 12 until the first "home pre- or regular-season game at Bell MTS Place."

This report by The Canadian Press was first published May 23, 2020.