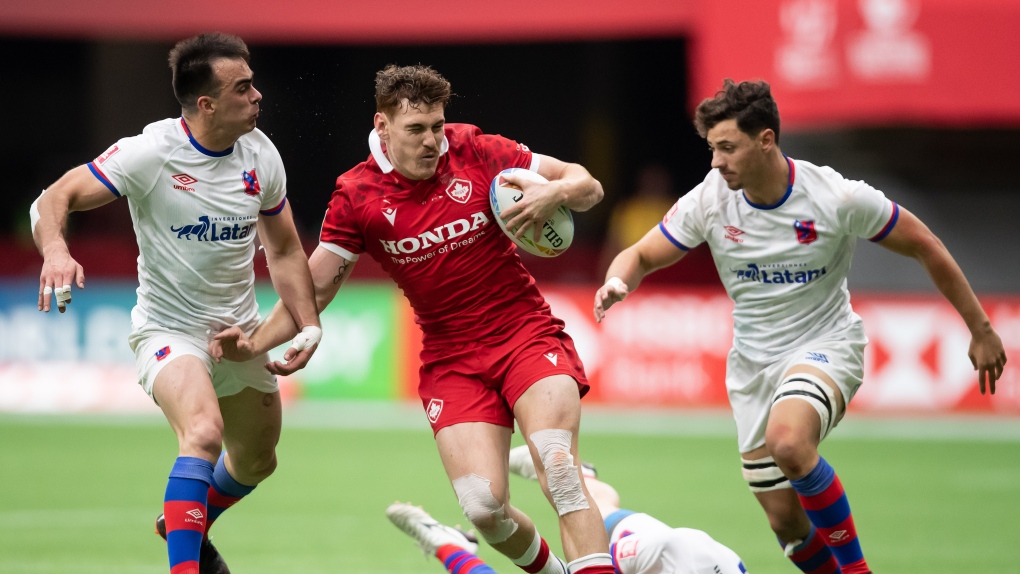 After cruising past Germany in their first game, the Canadian men needed a late try from Matthew Percillier to defeat Chile 19-14 and remain undefeated Saturday at the HSBC World Rugby Sevens Series.

"We found our footing in the second half," said Percillier, a member of the University of British Columbia Thunderbirds and one of several players making their World Rugby Sevens debut. "If we bring that tempo the whole game, no one is going to keep up with us."

"It was a team performance," said Coe, a member of the team that finished eighth at the Tokyo Olympics. "Any time one of our players fell down or made a mistake, six other guys helped him back up and worked hard for each other."

The Canadian women were beaten 22-12 by the U.S. and 19-5 by Great Britain before defeating Mexico 39-0 in the opening day of the Fast Four competition.

"We built every game," said coach Kelly Russell, a member of the Canadian team that won bronze at the 2016 Rio Olympics. "To end the game with a success like that is really positive moving into Day 2."

Brennig Prevost scored one try and set up another on a pretty play to Berna as the men started the day with a convincing 24-5 win over Germany.

Prevost, the Victoria native making his World Ruby Sevens debut, assisted on Berna's opening try of the game. He kicked a ball into the end zone that the Canadian captain was able to get a hand on.

"We knew we had good young guys coming off the bench," said Berna. "We had to set that platform. We wanted to provide a good structure for them."

Canada led the U.S. 12-5 at halftime of the opening match before giving up 17 second-half points.

"Sevens comes down to fitness and those extra couple of metres," said Apps, the team captain. "The U.S. really took it to us. They found our weaknesses in the defensive line and used them perfectly to keep possession and score.

Renee Gonzalez, a Scarborough, Ont., native who now attends the University of Victoria, scored Canada's lone points in the loss to Great Britain.

The tournament is the first HSBC World Rugby Sevens Series event since COVID-19 put the brakes on the circuit last March. Canada finished third in the last tournament played in Vancouver.

COVID-19 concerns meant attendance at BC Place Stadium was capped at around 13,500 in the lower bowl, but that didn't deter fans from dressing for the event. Scattered among the crowd were wizards in tall hats, a bunch of yellow bananas, different varieties of furry creatures, several pirates, a group dressed like canned clams, what looked like a bottle of ketchup, some Mounties, a blue shark, and several people in loud Hawaiian shirts.

This year's tournament has only 12 men's teams instead of the normal 16. Rugby powerhouses like New Zealand, Fiji, Australia and Samoa decided to skip the event.

The Canadian men have been drawn in Pool C with the U.S., Chile and Germany.

Several veterans of the Canadian men's team like Nate Hirayama, Connor Braid, Justin Douglas and Conor Trainor all retired after the Tokyo Games.

World Rugby says there will be no relegation from the 2021 Series and the results will not count toward seedings for future events.

The teams next head to Edmonton to play next weekend.

This report by The Canadian Press was first published Sept. 18, 2021.