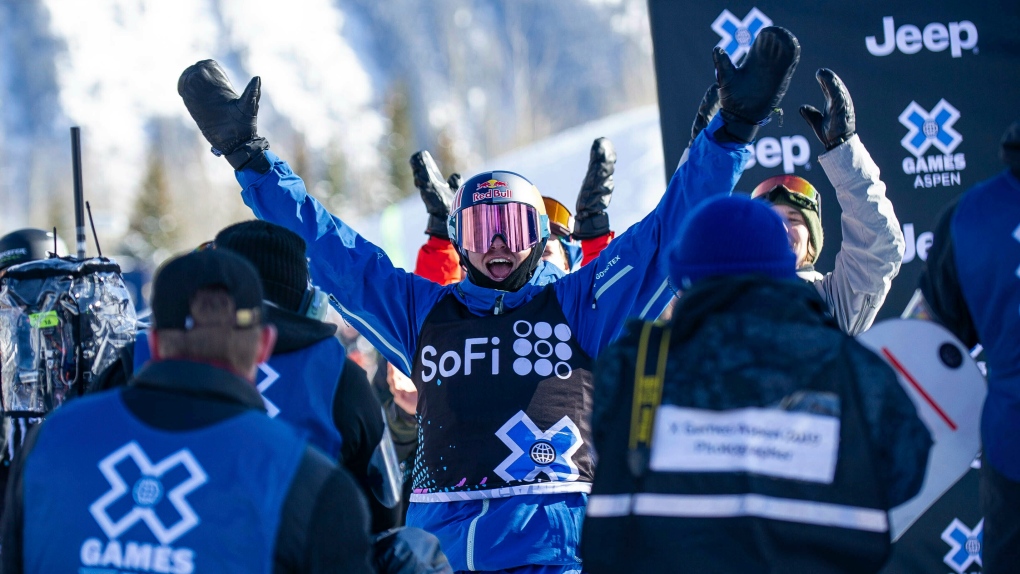 Canada's Mark McMorris raises his arms after seeing his winning score from this third run in the men's snowboard slopestyle final at the X Games on Saturday, Jan. 26, 2019, in Aspen, Colo. (Anna Stonehouse/The Aspen Times via AP)

ASPEN, Colo. -- Canadian Mark McMorris used a dramatic final run down the slopestyle course on Saturday to take the gold medal at the X Games.

The Regina native scored 96 points on a monster third run for his 17th X Games medal, one off American Shaun White's record.

McMorris, a two-time Olympic bronze medallist in slopestyle, was coming off a silver-medal performance in big air Friday night.

The 25-year-old scored 89.66 points on his first run down the slopstyle course on Saturday and 21.33 on his second. The final score is the best of three runs.

Sebastien Toutant of l'Assomption, Que., appeared to have stamped his spot on the podium with a 90.66-point third run that put him in position for bronze. He was bumped with McMorris's final score.

In the men's ski big air Saturday evening, Quebec City's Alex Beaulieu-Marchand finished with a combined score of 87 to capture silver behind Norway's Birk Ruud (89) and ahead of Britain's James Woods (82). Evan McEachran of Oakville, Ont., came in fourth with a score of 81.

The 24-year-old Beaulieu-Marchand picked up a bronze for Canada at Pyeongchang's slopestyle competition.

Earlier in the day, Spencer O'Brien finished just off the podium in the women's snowboard slopestyle.

O'Brien, from Courtenay, B.C., earned 81 points on her second of three runs down the course.