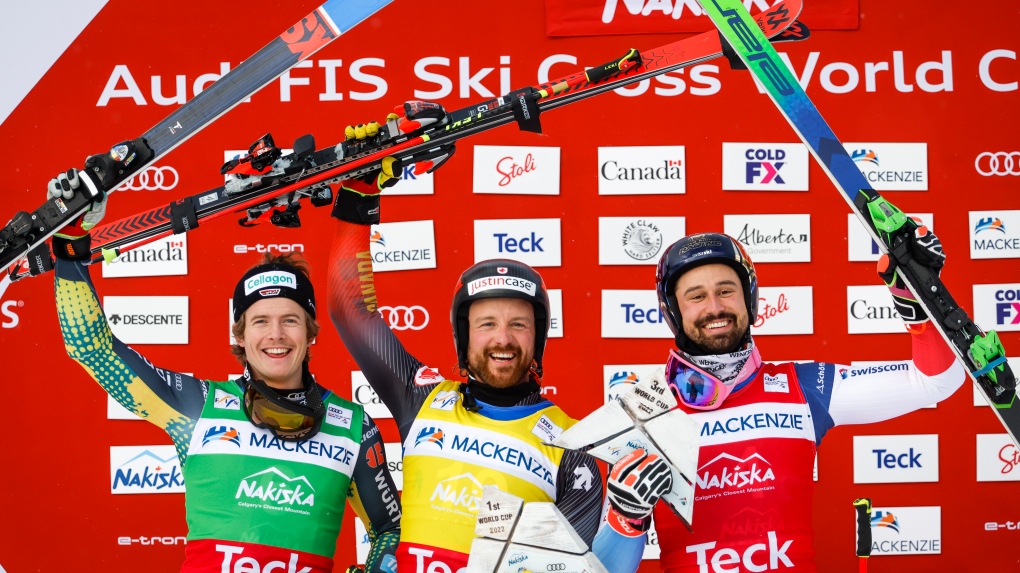 In the Canadian team's final tune-up ahead of next month's Winter Olympics in Beijing, Mahler prevailed in a tight four-man final at Nakiska ski resort west of Calgary.

The 26-year-old from nearby Canmore, Alta., topped the podium for the second time in his career following his first win in Val Thorens, France in December, 2019.

Mahler held off runner-up Florian Wilmsmann of Germany and Ryan Regez of Switzerland in third in the Canadian's first final in over two years.

"It's been awhile since I've been on the podium and to come back and get in that big final and get that top spot is pretty surreal," Mahler said.

The Canadians won't travel to Sweden for a pair of races next week due to COVID-19 concerns, so they raced to lock down Beijing berths on home snow in addition to their pursuit of the podium.

"I would like to hope that I helped my cause to get onto that Olympic team, but at this point, I'm not really worrying about that," Mahler said. "We'll see where it takes me at this point. I did the best I could and enjoying the moment for what it is right now.

"If I make the Olympic team this year, amazing, but if I have to work toward another four years, I'll be here so I'm not done yet."

Mahler didn't make the quarterfinal round Friday, but said he didn't change his strategy.

Steep rollers out of the start gate followed by two quick turns meant rounds were won or lost in the first few hundred metres.

"I just needed to charge to that first turn and then charge to the second turn and if you're first two to those two, you have a good chance of making it through," Mahler said. "I just had a little bit more aggression today."

Sweden's Sandra Naeslund won her second women's race in as many days ahead of runner-up Marielle Thompson of Whistler, B.C.

The Canadian and Switzerland's Fanny Smith bumped and crashed in the second turn of a three-woman final leaving Naeslund skiing alone for the win.

Thompson got back on her skis and crossed the finish line for second and her fifth podium this season.

"Actually, my first World Cup podium was like that. I crashed and got back up and got third," Thompson said. "Anything can happen in ski cross. "Sometimes a bunch of stuff happens. You just have to keep moving on."

Thompson, the 2014 Olympic women's champion, faltered on the opening rollers Friday and didn't advance out of her quarterfinal.

She won both her quarter and semifinal heats to advance Saturday.

"(Friday) was kind of fluky. I just caught an edge out of the gate," Thompson said. "I knew I had the speed yesterday on the course as well as today.

"So just stuck with my approach, getting all the features in on the start and then being strong all the way down the hill.

"I'm really happy with how today went despite the crash in the final."

After finishing second Friday, Toronto's Kevin Drury was on the wrong end of a three-racer collision in his quarterfinal's second turn and didn't advance.

This report by The Canadian Press was first published Jan. 15.