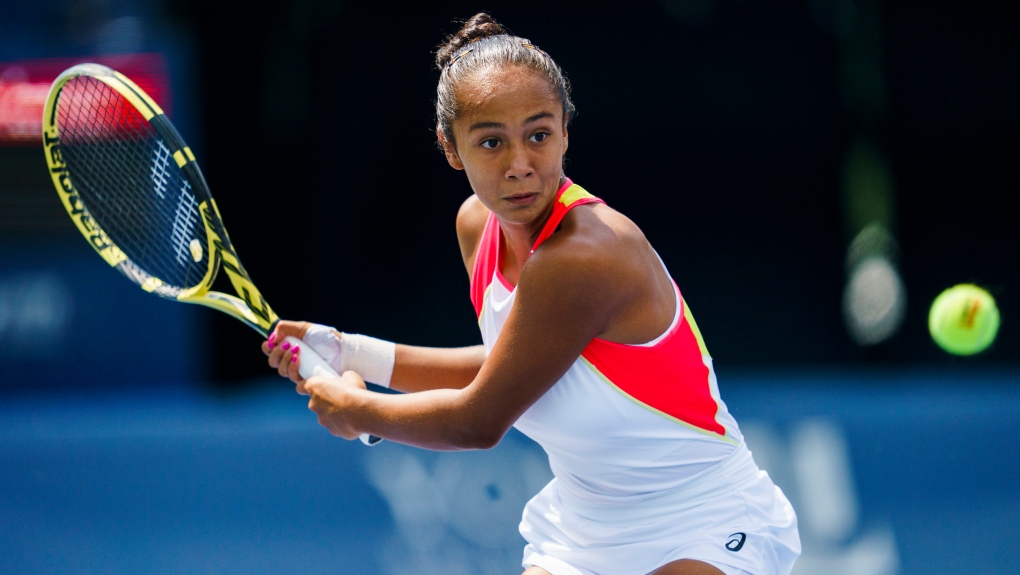 Leylah Annie Fernandez of Canada returns a shot Marie Bouzkova of the Czech Republic in round 1 of the Rogers Cup women's tennis tournament in Toronto, Monday August 5, 2019. (THE CANADIAN PRESS/Mark Blinch)

MELBOURNE, AUSTRALIA -- Leylah Annie Fernandez is one win away from qualifying for her first-ever Grand Slam main draw.

The 17 year old from Laval, Que., defeated the 168th-ranked Mayo Hibi 6-4, 6-4 in the second round of qualifying at the Australian Open on Friday.

Despite committing 39 unforced errors in the match, Fernandez recorded 34 winners -- 21 more than her Japanese opponent.

The Canadian teen is making her first Grand Slam appearance as a pro this week in Melbourne, Australia. She won her first-round qualifying match by upsetting Romania's Patricia Maria Tig 6-2, 6-3 on Thursday. Tig was the seventh seed in the qualifying draw and ranked 113th in the world.

The Westmount, Que., native lost 6-4, 6-3 to Italy's Martina Trevisan with a spot in the tournament on the line. Ranked 211th in the world, Bouchard committed 29 unforced errors in the match.

With the loss, Bouchard will not participate in the Australian Open's main draw for the first time since 2013.

Fernandez is the lone Canadian woman remaining with a chance to earn a spot in this year's first Grand Slam.

Canada's top-ranked player, Bianca Andreescu, was forced to withdraw from the tournament as she continues to rehab a knee injury that she suffered at the WTA Finals in Shenzhen, China.

Also on Friday, Toronto's Steven Diez and Brayden Schnur of Pickering, Ont., failed to advance to the third and final stage of qualifying.

Diez, who was ranked 23rd in the qualification draw, fell to Japan's Hiroki Moriya in straight sets 6-4, 7-5 on Friday.