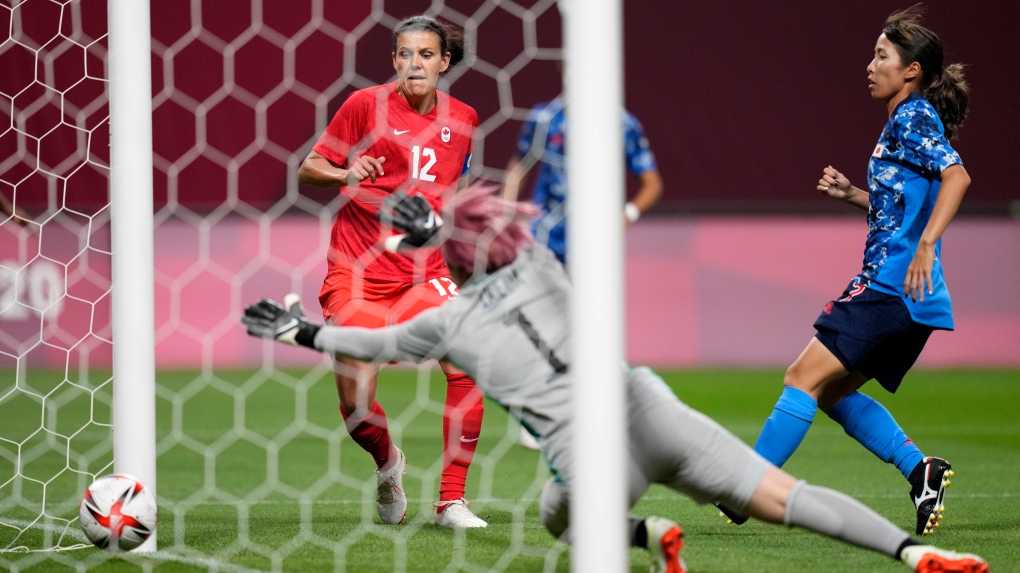 SAPPORO, JAPAN -- An ideal start for the Canadian women's soccer team was blunted by a late goal Wednesday as host Japan rallied for a 1-1 tie in the Group E opener for both teams at the Tokyo Olympics.

Captain Christine Sinclair marked her 300th career national team appearance with a goal in the sixth minute but Japan's Mana Iwabuchi tallied in the 84th as each side settled for a single point.

"We knew we'd have a difficult game on our hands," said Canadian coach Bev Priestman. "But credit to the group, they gave absolutely everything."

Canadian goalkeeper Stephanie Labbe stopped a penalty shot early in the second half before leaving the game due to injury. She appeared to favour her left collarbone area but there was no immediate word on the severity of the problem.

Canada will return to the Sapporo Dome on Saturday to play Chile before shifting to Ibaraki Kashima Stadium for a Tuesday game against Britain.

Eight teams will advance from the 12-country round-robin to the knockout stage. The final is set for Aug. 6 at Tokyo's Olympic Stadium.

Sinclair's one-timer off a low cross by Nichelle Prince hit the post before she tapped in the rebound for her 187th career international goal. The ball rolled across the goalmouth and Sinclair slotted it home with her left foot.

Labbe was given a yellow card in the 53rd minute after colliding with Japan's Mina Tanaka inside the penalty area. Labbe was down for several minutes but stayed in the game and stopped Tanaka's attempt from the spot.

"We're still assessing (her) status at the moment, but she did unbelievable," Priestman said. "I think after that save (on) the penalty, she made about three other saves after that.

"I think big players rise in big moments and she did that for the team regardless of how she felt, which is outstanding."

Kailen Sheridan replaced Labbe in the 58th minute. Iwabuchi pulled the host side even after outrunning Canadian defender Shelina Zadorsky to a through ball and curling a shot past Sheridan.

Sporting red jerseys for the evening matchup in a spectator-free stadium, Canada used a 4-3-3 formation for the opener. Japan, wearing blue shirts with flashy designs, went with a 4-4-2.

Perhaps owing to some early jitters, both teams made uncharacteristic mistakes over the first few minutes.

Canadian right back Ashley Lawrence helped set up the opening goal by sending Prince down the wing for a cross. When Sinclair's strike hit the post, she quickly sensed where the rebound might roll and left the Japanese defence flat-footed.

The sport's all-time goal-scoring leader, Sinclair had the winner in Canada's 2-1 win over Brazil in the bronze-medal game at the 2016 Rio Olympics.

She's one of 12 returning players from the Rio squad. Fifteen of the 22 players on the full team (which includes four alternates) have 50 caps or more.

Germany won gold in 2016 but failed to qualify for Tokyo. Canada also finished third at the 2012 Games in London.

John Herdman, now in charge of the Canadian men's program, coached the women's side to the back-to-back Olympic podium appearances. Priestman has served as women's team coach since October.

There were few chances in a rather timid opening half on a hot summer evening. Japan tried working the ball along the wings but struggled to penetrate the Canadian back line.

Pace of play picked up mightily in the second half.

Labbe was hurt after mistiming a sliding challenge and clipping Tanaka inside the area, with the Japanese forward falling on top of her. An emotional Labbe was down for several minutes as she received medical attention.

She decided to stay in the game after testing her upper body with a pushup and yoga prayer stretch. The referee originally called for a Canadian free kick on the play but a penalty shot was awarded after a VAR review.

Tanaka took several small steps as she approached the spot before firing the ball to her left side. Labbe guessed correctly, blocking the shot before the Canadian defence cleared it away.

Japan outshot Canada 7-6 overall and had a 3-1 edge in shots on target. Canada had the possession advantage at 59 per cent.

Sinclair spoke to her teammates on the pitch after the game to make sure the disappointment of blowing a late lead didn't linger.

"She brought us in a huddle, all of our heads were down," said midfielder Desiree Scott. "We were obviously frustrated with the result. She said, 'You know what? We have another game. We bounce back and we recover immediately. We get in the locker-room and we do all of our little bits that we need to do to get ready for our next match.'

"So in classic Sinclair fashion she was the first to reel us in."

Canada entered the tournament at No. 8 in the latest FIFA women's soccer rankings, two positions ahead of Japan. The United States, Germany and France hold the top three spots.

The Canadian women qualified for Tokyo by finishing runner-up to the U.S. at the CONCACAF Women's Olympic Qualifying Championship last year.

This report by The Canadian Press was first published July 21, 2021.