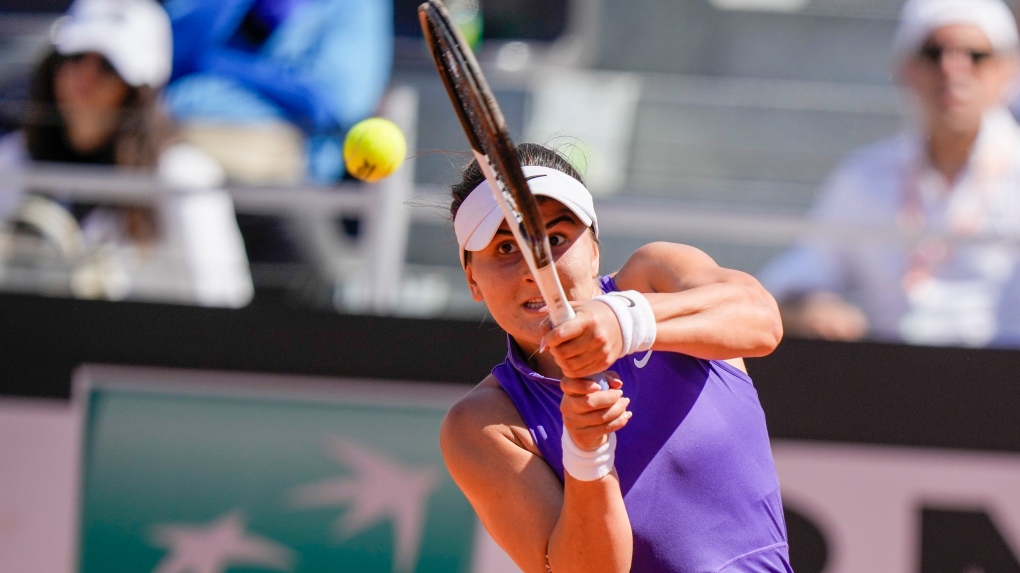 Bianca Andreescu of Canada returns the ball to Iga Swiatek of Poland during their match at the Italian Open tennis tournament, in Rome, Friday, May 13, 2022. (AP Photo/Andrew Medichini)
PARIS -

Canadian Bianca Andreescu scored a three-set victory over Ysaline Bonaventure of Belgium in the first round of the French Open on Monday.

Andreescu dropped the opening set 6-3, before bouncing back to win the next two sets, 7-5 and 6-0.

"I really said to myself 'stay in the present moment, keep fighting because it's not over until it's over,"' Andreescu told TSN. "I really had to put pressure on her -- if not, I knew she was going to win."

The former world No. 4 fell battled back from a 3-1 deficit in the second set to force the deciding set.

"Just having that fighting spirit until the end really helped me," she said.

Bonaventure served up 10 double faults in the match.

Andreescu, from Mississauga, Ont., came to Paris looking to build on her successful clay court season following a months-long absence to recuperate physically and mentally from a tough 2021 season.

"It's great to know that even when I am not playing my best tennis that I can find a way to win," she said. "I am super happy with how I managed my emotions."

Andreescu is one of four Canadians still competing in Paris.

Leylah Fernandez and Felix Auger-Aliassime, both of Montreal, will be back on the clay on Wednesday following first round wins on Sunday. Fernandez, the tournament's 17th seed, will play Czech Katerina Siniakova, while Auger-Aliassime, seeded ninth on the men's side, meets Argentine qualifier Camilo Ugo Carabelli.

This report by The Canadian Press was first published May 23, 2022.